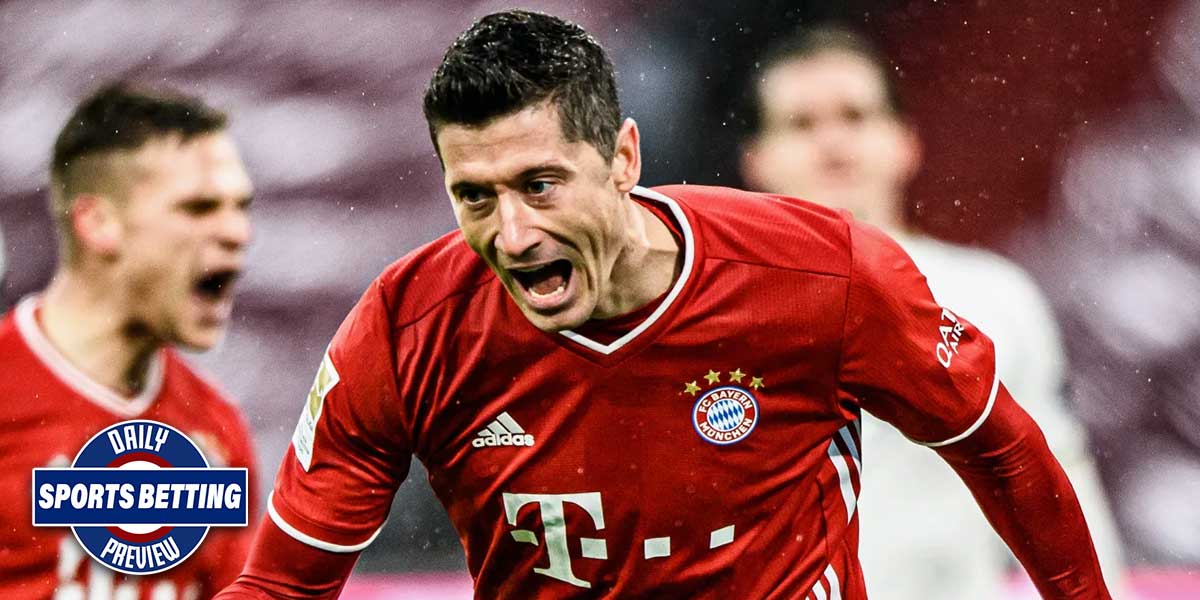 Today’s Preview starts out with the matchup between Bayern Munich and Lazio in the Champions League. Then, the Boston Celtics and the Dallas Mavericks face off in NBA action. Finally, in the Handball Champions League, Paris Saint-Germain takes on Vive Kielce.

The reigning kings of the Champions League, Bayern Munich, are set to face a challenge from Lazio in the first leg of their round of 16 matchup.

Bayern are in typical dominant form - they’re first place in the Bundesliga, and notably favored in this matchup. Lazio are no slouches, but sit in sixth place in Serie A, and seem to have regressed slightly from a 2019-2020 season that saw them finish only five points off the top of their domestic league.

On the three-way moneyline, Bayern Munich are the odds on favorites, with -125 odds to win. In other words, a Bayern victory is more likely than the combined chances of a Lazio victory and a draw.

Based on some recent trends, it’s obvious why the odds are set this way. Lazio is coming into this match 3-0-2 in their last five matches. However, in their last six Champions League matches, they’re only 2-4-0.

Bayern Munich on the other hand has been red hot. In their last five total matches, they’re 3-1-1 and in their last six champions league matches, they are 5-1-0. Bayern Munich is also the reigning UEFA Champions League winners so it’s no surprise they’re getting love from the oddsmakers and soccer bettors.

Lazio vs. Bayern Munich - To Qualify

In terms of odds to make it to the next round of the Champions League, Bayern are even more prohibitively favored.

The gap between Bayern Munich’s odds to win the match straight up and their odds to qualify over the course of the two-leg tie is notable.

It is possible that this implies some value for soccer betting enthusiasts in the game to game lines on Bayern’s side. The odds to qualify are definitely worth keeping an eye on moving forward, as they will depend heavily on the result of this match.

Because of the two-game aggregate being decided on goals scored, keep an eye on the O/U as well. Both teams will likely come out swinging to gain a cushion for the next match. The current O/U is set at three goals with some prominent shading on the side of the Over.

The Boston Celtics and the Dallas Mavericks were both teams that started out the season with high expectations.

The Celtics were coming off of a run to the Eastern Conference Finals, and were expected to be a top contender in the conference. The Mavericks had Luka Doncic, the preseason MVP favorite, and were thought of as a genuine playoff threat.

Neither team has lived up to that billing.

The Celtics are sitting at .500, with 15 wins and 15 losses, and are only a playoff contender by virtue of the Eastern Conference being awful. The Mavericks are 9th in the West, with a record of 14-15, and Doncic no longer looks like a possible MVP despite his electric scoring and playmaking abilities.

The Celtics are 15-15 straight up, and also 15-15 against the spread, although it’s worth noting that both of those decrease heavily on the road.

On the road, Boston has a record of 7-10 straight up, and 6-11 against the spread. This includes a streak - which they are currently on - of not covering the spread in their last four road games.

Dallas, meanwhile, has similarly poor splits at home, with a 7-8 home record straight up and a 4-11 home record against the spread.

The Celtics being only 1.5 point favorites means that bettors are effectively buying 1.5 points by taking them on the moneyline as opposed to the spread.

NBA betting enthusiasts will have to do their own calculations as to whether those 1.5 points are worth the move from -110 to -130 when moving from the spread to the moneyline.

Paris Saint-Germain is set to face off against Lomza Vive Kielce, as Kielce looks to stay at the top of Group A. Kielce may be the top team in the group at the moment, but they’re unfavored in this matchup specifically.

PSG is a big-time favorite in this matchup on the three-way moneyline, and the spread is no different. It’s worth noting that Kielce won the first matchup between these two teams, but they are not favored to take this one.

The last time these teams faced off in the Champions League in Paris, PSG dominated, winning 35:26.

It seems as though the US online sportsbooks expect a similar performance from the LNH Division 1 leaders.