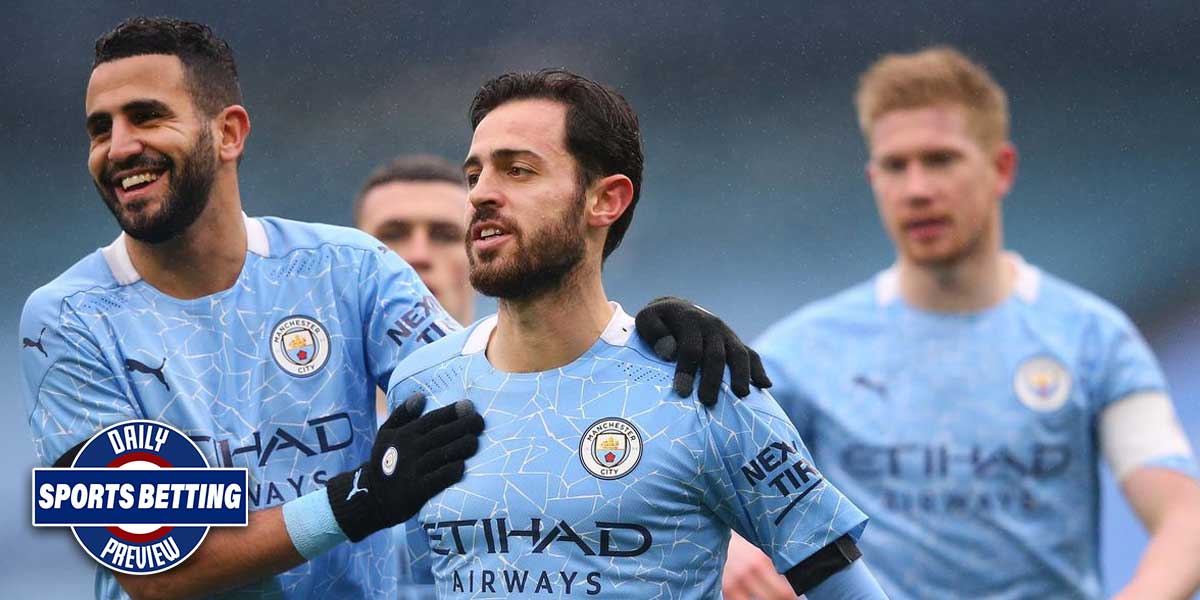 First up, in the Champions League, Borussia Monchengladbach takes on Manchester City. Then, a surging Alabama Crimson Tide basketball team takes on the Arkansas Razorbacks. Finally, in the NHL, the New York Rangers take on the Philadelphia Flyers.

Manchester City have roared into form, and have won their last 18 matches in a row at the competitive level. The Premier League leaders have surged to the top of the PL standings, and are looking like one of the best teams in Europe.

Today, they’re faced with the challenge of Borussia Monchengladbach, who currently sit in eighth place in the Bundesliga, having won just one of their last five Bundesliga matches.

Manchester City are about as heavy a favorite as is possible during the Champions League Round of 16.

In fact, of all the remaining Round of 16 matches, Manchester City is more favored over Gladbach than any team is over any other team on the three-way moneyline.

Considering the gap in talent and form between City and Gladbach, many soccer bettors might opt for the three-way moneyline odds on City.

They are a fairly unique combination of relative safety and likely profit, and soccer betting fans should take notice.

Alabama has quietly become one of the powerhouse teams in the entirety of NCAA Division 1 Basketball. The Crimson Tide are currently ranked 7th, and have a record of 18-5, leading the SEC. The only challenger to their position atop the conference is Arkansas, their opponent in Wednesday’s matchup.

Arkansas boasts a record of 17-5, meaning if they win this game, they’ll jump Alabama on the standings.

The spread of +/- 1.5 points denotes that the sportsbooks expect a very close matchup, but the last time these two teams faced off, it wasn’t close.

In January, Alabama defeated Arkansas 90-59, although this 31 point rout did take place in Tuscaloosa.

A different atmosphere could be all Arkansas needs to make this game much more competitive.

Alabama has only played seven games on the road this season, but they have won five of those seven games. It’s worth noting that those two road losses (to Oklahoma and Missouri) were Alabama’s only games this entire season in which they scored less than 70 points.

Arkansas, meanwhile, is a whopping 13-1 when playing at home, which is a big part of the reason why they’re favored against a team that beat them by 31 points.

The spread of 1.5 points is intriguing due to how small it is, and it’s worth noting that both teams have been positive ATS this season. Alabama has a 13-9-1 ATS record, while Arkansas has a 13-7-1 ATS record.

Notably, in Alabama’s last 12 games as underdogs, they have covered the spread nine times.

College basketball betting enthusiasts have a lot to look forward to in this matchup, and it could be a potential SEC Tournament Finals preview.

The East Division of the NHL features some very intriguing teams and matchups, and today, the New York Rangers face off against the Philadelphia Flyers.

The Rangers enter this matchup with a 6-7-2-1 record, good for sixth place in the division, and the New Jersey Devils and Buffalo Sabres are hot on their heels.

The Flyers are only one spot ahead of the Rangers in the division, but with an 8-4-1-2 record, they’re relatively safe in that spot for now.

The Flyers are favored over the Rangers, but minimally so, despite the fact that they have a better record and are the home team.

Why? Because the Flyers are currently going through serious injury issues, with about half of their forwards unable to play. The Flyers have only played two games since COVID-19 put them out of action for almost two weeks, and they have not performed well in those games.

A 7-3 loss to the Boston Bruins was the more embarrassing of them, but a 3-2 loss to this very Rangers team does not bode well either.

Some sportsbooks offer odds in the form of three-way moneylines at the end of regulation, and they can be useful for seeing a bit more of a comprehensive breakdown, as well as for value comparisons.

NHL betting fans have the choice between multiple moneylines and the puck line in this matchup.