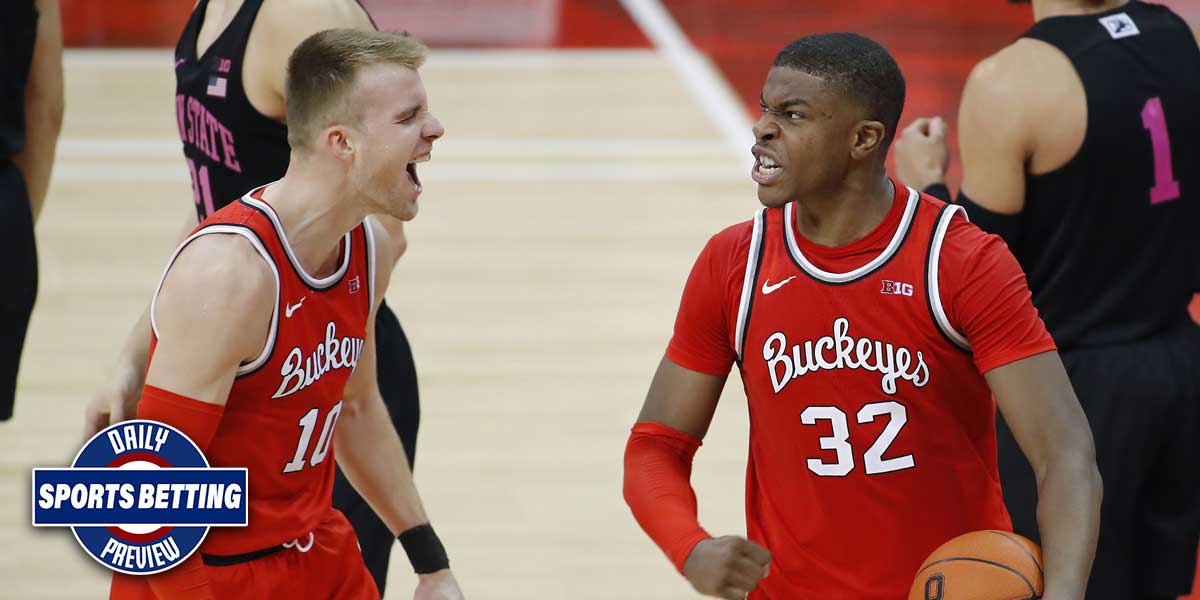 Today’s Preview kicks off with a look at the matchup between Ohio State and Iowa in college basketball. Then, in the NHL, the Vancouver Canucks take on the Toronto Maple Leafs.

Finally, in the Premier League, Tottenham faces off against Chelsea.

Ohio State and Iowa are both elite teams in the college basketball world this season. The AP Poll ranks them as the seventh and eighth best teams in the entire country right now. Both teams have racked up only four losses on the season, with Ohio State reaching 14 wins and Iowa sitting at 13 wins.

On the spread, Ohio State has a 10-7-1 record, while Iowa has a 10-7 record. In other words, these teams seem roughly equal at first glance

Iowa is playing at home, and that does explain some of the discrepancy in the spread between what could reasonably be described as evenly matched teams.

It’s worth noting that Iowa’s home record is 10-1 straight up, and 8-3 against the spread - the Hawkeyes are truly elite at home. Ohio State, meanwhile, is not that great on the road. Straight up, the Buckeyes have a 4-3 record, while against the spread, they are 3-3-1.

The biggest question this game presents to college basketball betting enthusiasts is whether Iowa’s excellent home performances hold up even when they’re favored by five points.

If they were sitting around -2.5, wagering on their spread in this matchup would probably be a slam dunk. However, with a five point spread on the major sportsbooks, there’s a lot more risk involved in said wager, and bettors could instead take a look at the moneyline.

The NHL features a large number of matchups on Thursday evening, but the matchup between the Vancouver Canucks and the Toronto Maple Leafs sticks out.

The moneyline sees the Maple Leafs favored at -175 odds, while the Canucks take the role of the underdog at +155 odds.

The matchup seems reasonable enough for Toronto to be a solid play on the moneyline in this matchup. The puck line is fairly intriguing for these two teams. Vancouver’s 6-7 straight up record is identical to their puck line record.

Toronto, meanwhile, is a woeful 3-7 against the puck line this season, which stands in stark contrast to their stellar straight up record.

Both sides of this puck line could be solid plays for NHL betting enthusiasts. The Canucks are favored at +1.5, with -145 odds.

It’s worth noting at this point that the Canucks are 2-5 against the puck line on the road, which is also their straight up road record. Meanwhile, at home, the Maple Leafs are 2-2 on the puck line and 3-1 straight up.

This matchup presents a lot of intriguing wagers on both the straight up moneyline and the puck line.

Tottenham and Chelsea face off in a clash of top table Premier League sides at 3:00 p.m. EST.

The two teams are both sitting on 33 points in the league, in seventh and eighth place respectively. However, Tottenham has played one less game than Chelsea, and has a goal differential of +13 to Chelsea’s +12.

Tottenham +0.5 is effectively just taking the other side of that - the equivalent of taking Tottenham and a draw on the three way moneyline.

Tottenham vs. Chelsea No Draw ML

The no draw moneyline sees Chelsea as a -220 favorite, and one wonders if that premium is worth paying for getting your money back in the event of a draw.

Tottenham +160 on the no draw moneyline is fairly intriguing, but again, there’s a high price to pay for that safety. Soccer betting fans know that this is a great matchup, and there are a lot of different ways to wager on it.