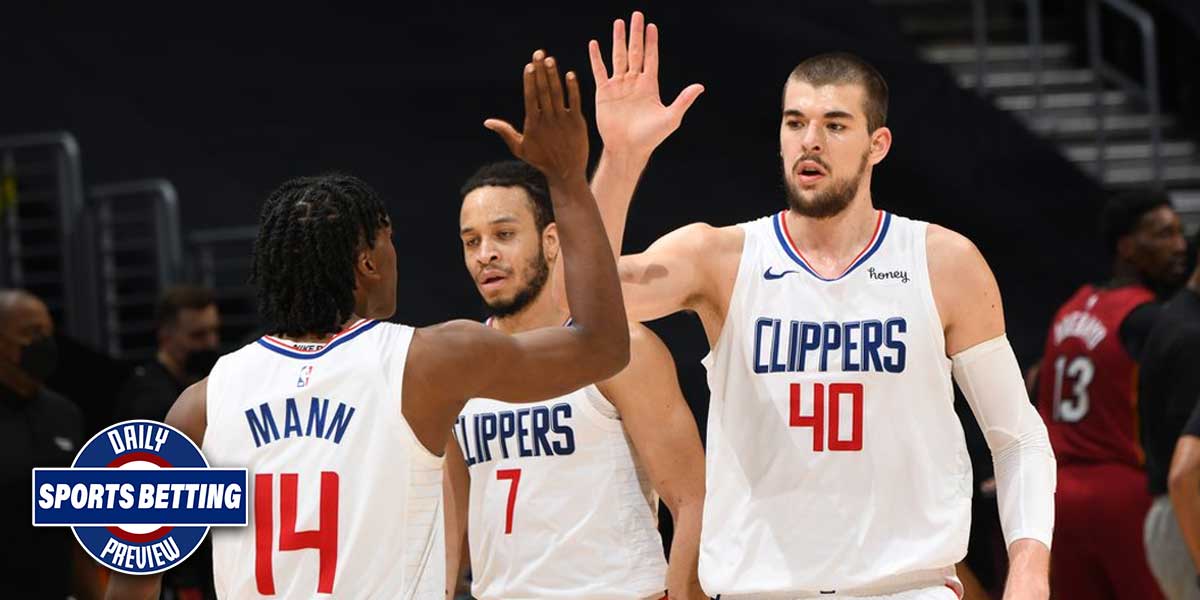 Today’s Preview kicks off with a look at the MLB Spring Training matchup between the Philadelphia Phillies and the New York Yankees. Then, the Boston Bruins battle against the Pittsburgh Penguins in NHL betting action.

Finally, in the NBA, the Los Angeles Clippers face off against the Dallas Mavericks.

The New York Yankees are entering the 2021 season with high expectations, and have the shortest World Series odds in the American League. The Yankees are behind only the Los Angeles Dodgers in terms of World Series odds overall, and throughout the year, they’ll likely be favored against almost every non-Dodgers team.

Monday’s Spring Training game against the Philadelphia Phillies is no exception.

The Yankees are sitting at 1:2 odds as the favorite in this Spring Training matchup against the Phillies.

At most online sportsbooks, the Yankees opened at around -165 to -180 odds, so there has been some clear movement in their favor.

The probable pitchers are Chase Anderson for the Phillies and Domingo German for the Yankees.

Some of that can be chalked up to small sample size, as he only started seven games, appearing in 10 in total. Still, his 2020 season was one to forget, and he’ll need to improve on it going into 2021.

Domingo German also had a 2020 to forget, as he did not participate in the season due to a suspension based on the MLB’s domestic violence policy.

German projects to be a solid pitcher in 2021, with Baseball-Reference giving him a projected 1.265 WHIP in the new season.

In other words, the two pitchers could be reasonably similar, but the lineups in the batters box will not be.

The Yankees have the edge in this game due to their bats, and MLB betting fans would be wise to remember how dangerous those bats are.

The Boston Bruins and the Pittsburgh Penguins are sitting in fourth and third place in the NHL’s East Division respectively. The Bruins have a record of 14-7-2-2, while the Penguins clock in with a record of 17-9-1-0.

Given how close together these teams are, it should come as little surprise to hockey betting enthusiasts that the sportsbooks believe this game is an even matchup.

On the puck line, the Penguins are receiving the +1.5 handicap, and the odds are about where one might expect for an even game on the puck line.

One of the downsides of an even game on the puck line is that it becomes very uneven, and hard to judge.

The Bruins, for example, are 7-18 on the puck line this season, and most of their puck lines, by definition, will be easier to cover than this one.

Any team getting a -1.5 puck line in an even game is being handed the hardest possible puck line to cover, and the Bruins aren’t very good at covering puck lines to begin with.

The Bruins are an incredible 2-12 against the puck line on the road, and all signs point to this trend continuing with the way this puck line is set up.

The Under has hit in six of the Bruins’ last seven games, with one push. The Penguins, meanwhile, have helped hit an Over in their last four games against teams with winning records.

The line being set at 5.5 is noticeable, and the fact that there’s shading on the Under here is also noticeable - this could be a low-scoring game.

The Los Angeles Clippers have lost six of their last 10 games, and are slipping a bit from the lofty heights they held earlier in the season. They still have an overall record of 25-15, but in the context of their overall record, their recent performances have been concerning.

That said, they’re still sitting in fourth place in the Western Conference, two games ahead of the fifth-place Denver Nuggets, and four games back of the first place Jazz.

The Dallas Mavericks, on the other hand, are sitting right on the bubble of the playoffs, in eighth place.

Dallas has won seven of their last 10 games, and enters this matchup in considerably better form relative to their overall record than LA does.

Perhaps that’s why the matchup is so even on the online sportsbooks.

On the road, even in bad form, the Clippers are -120 favorites over the Mavericks, and that number would probably be higher if the two teams met at a different time this year.

As always with matchups this close in the NBA, bettors can buy the points or sell the points when moving from the moneyline to the spread.

NBA betting fans can approach matchups like this in a number of different ways, but the fundamental dynamic at play here is that the Clippers are a more talented team, but they’ve been a worse team over their last ten games.

This presents a unique challenge, and NBA bettors can meet that challenge on either the spread or the moneyline