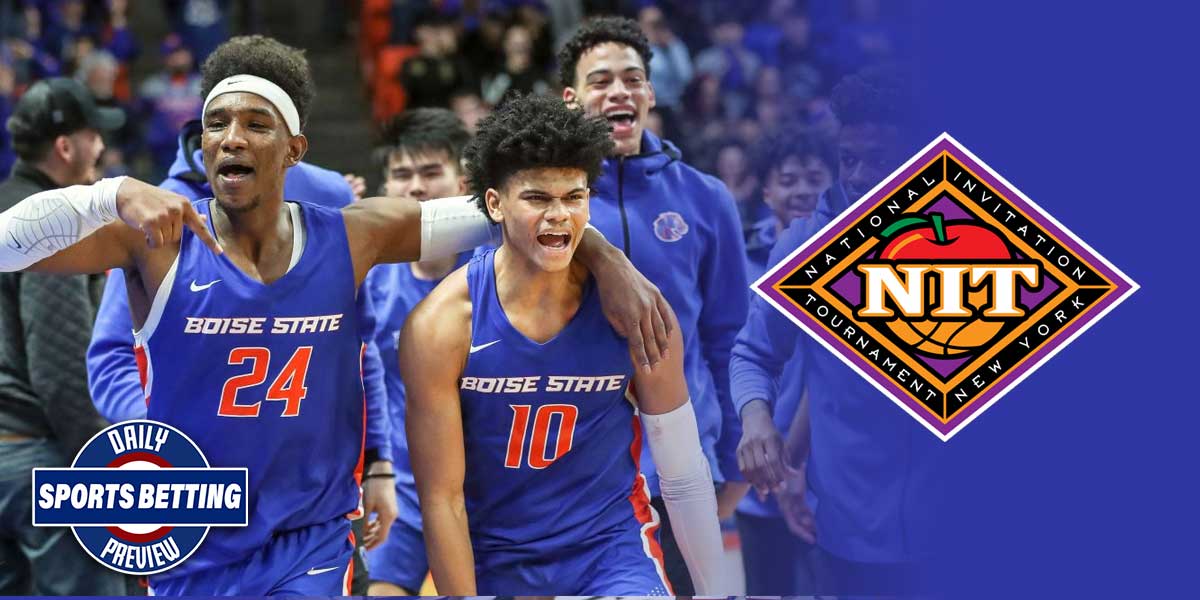 Today’s Preview kicks off with a look at the NIT Tournament, as the Boise State Broncos take on the Memphis Tigers. Then, the WGC Dell Match Play features matchups between some of the top golfers in the world. Finally, in the NBA, contenders collide as the Philadelphia 76ers battle the Los Angeles Lakers.

While much of the college basketball betting world has been focused on the NCAA Tournament, it won’t be featuring games until Saturday. During this brief interval, attention turns to the NIT Tournament, and one quarterfinal matchup is particularly intriguing.

This matchup pits the Boise State Broncos against the Memphis Tigers, and it looks to be an excellent betting matchup.

Memphis has been favored from the jump in this matchup, and they enter gameday with odds nearing 1:2 on the moneyline.

The Tigers enter this matchup in very good form, having won eight out of their last ten games.

The Broncos, on the other hand, have gone 5-5 in their last ten games, and despite having a mildly better record than Memphis, are deserving underdogs.

Boise State is a 4.5 point underdog on the spread, and they’ve not had a lot of success against the spread in their last ten games either, going 5-5.

Memphis, on the other hand, is 9-1 against the spread in their last ten games, a genuinely excellent run.

This sample size can be extended a bit as well - they’re 13-3 in their last sixteen games against the spread.

College basketball betting fans have a choice between a better record and excellent form, and the sportsbooks are taking the side of excellent form.

The WGC Dell Match Play continues on Thursday with some excellent matchups for bettors to wager on.

Dustin Johnson and Jon Rahm have been two of the most defining golfers of the last year, and are both comfortably top five players in the world.

Johnson, of course, is the best golfer in the world right now, being ranked first place in the OWGR.

Therefore, it should come as no surprise that in a matchup with Robert MacIntyre, Johnson is a heavy favorite.

D.J. is a -225 favorite over MacIntyre, and one wonders if he’d be favored to a similar degree against nearly anyone on the tour.

MacIntyre took down Kevin Na already in this tournament, but facing down Johnson is a much tougher task, with all due respect to Na.

That said, even though MacIntyre is no slouch, and is ranked 44th in the OWGR, he’s still easily an underdog in this matchup.

Rahm and Shane Lowry, his opponent for the day, are set up with identical odds to Johnson and MacIntryre.

Rahm, ranked third by the OWGR, and one of the most consistent performers on the tour, finds himself favored over Lowry at -225 odds.

Lowry is ranked 41st in the OWGR, and Rahm is ranked third, but the fundamental construction of this match is similar to the first one discussed.

That is to say, there’s a clear favorite, and it’s the guy who’s a consensus top-five golfer in the world.

Golf betting fans can lay the favorites in these matchups for theoretically easy money, or take a shot on the underdogs.

The Los Angeles Lakers are adjusting to life without Lebron James and Anthony Davis, and unsurprisingly, they’re a worse team for it.

They’ve lost their last three games, and with the Philadelphia 76ers coming to town, the Lakers are looking down the barrel of a potential fourth loss. The online sportsbooks certainly think that the Sixers are notable favorites here.

The Sixers are known for underperforming on the road, but they’re still clear favorites in this matchup on talent alone.

Intriguingly, the Lakers have been the best defensive team in the NBA, with a Defensive Rating of 106.7 for the season. That might be out the window without Lebron and AD, however, as they’ve just given up 111 points to the Phoenix Suns and 128 points to the New Orleans Pelicans.

The spread for this matchup opened with the Sixers favored by 4.5 points, but has since moved to Sixers -5.5

This movement reflects the growing lack of faith in the Lakers without James and Davis, and it’s hard not to wonder if the line will continue to move that direction.

NBA betting fans will have something to look forward to in this matchup, especially if the line continues to shift.