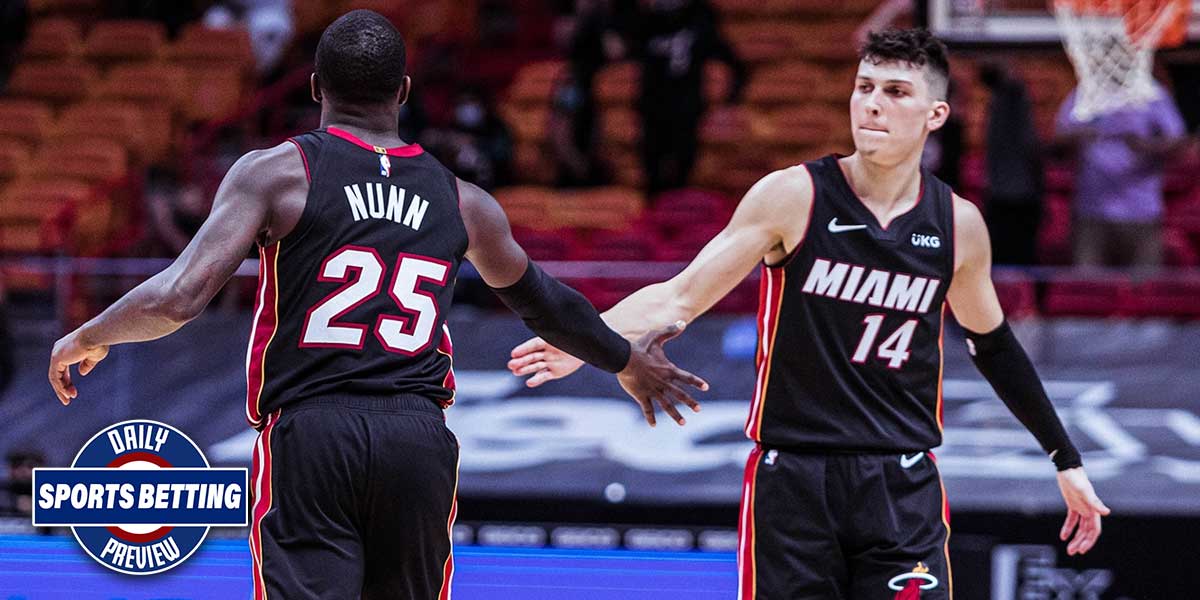 LAS VEGAS - Welcome to the Daily Sports Betting Preview on this fine Monday!

Today’s Preview kicks off with a look at an NBA matchup between the New York Knicks and the Miami Heat. Then, the Vegas Golden Knights face off against the Los Angeles Kings in NHL betting action. Finally, Stefanos Tsitsipas takes on Kei Nishikori as the ATP Tour visits Miami.

The New York Knicks are in the midst of a resurgent season, and currently occupy the fourth seed in the Eastern Conference.

The East is quite bottom-heavy this year, however, and their fourth seed sounds far better than their 24-22 record actually is. Still, it’s a vast improvement over expectations, and with six wins in their last ten games, they show no signs of slowing down.

The Miami Heat, on the other hand, have followed up their NBA Finals appearance in 2020 with a poor showing this season.

The Heat are 22-24, and that’s good enough for the eighth seed. They’re still in a position where a good run could make them legit contenders again, although much of that is due to how bad the rest of the East is.

Right now, however, they’re running the other way, with six losses in a row.

Still, the Heat are more highly regarded than the Knicks in this matchup, as they are not only favorites, but road favorites.

The Heat have a 10-12 record on the road, while the Knicks are 14-8 at home, so the Heat being favored is notable.

Spread betting is tricky to estimate when looking at trends. The trends for this year suggest that the Heat have been poor against the spread overall, and the Knicks have been good.

This is because they have similar records, but the expectations on each team were different.

Of course, the team coming off of a Finals appearance that slumps in the next season has a bad overall record against the spread - that’s how spreads work. That said, it seems as though the online sportsbooks keep expecting Miami to perform well, and they just have not done that.

The Heat are 2-8 against the spread in their last ten games, and while some of that is down to general poor performance, it suggests that the sportsbooks continue to believe in them despite all evidence to the contrary.

NBA betting fans will need to figure out if they believe in the Heat as much as the online sportsbooks seem to.

The Vegas Golden Knights remain one of the best teams in the NHL, and sit atop the West division despite having a lower goal differential than the second-place Colorado Avalanche.

Their opponents on Monday night, the Los Angeles Kings, are near the bottom of the division, with 10 less wins than the Golden Knights.

It’s not a surprise to see the Golden Knights favored at around 1:2 odds over most mediocre teams in the NHL, and the Kings certainly are that.

The Kings have a record of 13-13-5-1, almost the definition of mediocre, and their odds to win this matchup reflect the gap between the two teams.

The Golden Knights have a ridiculous home record of 13-2-0-1 this season, and if anything, the odds could be underestimating them.

However, the Golden Knights have been intriguingly poor against the puck line, with an overall PL record of 13-19. At home, they’re 6-10 on the puck line, which is in line with their overall mediocre puck line record.

NHL betting enthusiasts have several intriguing trends to look at when picking out their wagers on this exciting matchup.

ATP Miami gives tennis betting fans a shot at wagering on some of the best tennis players in the world.

Stefanos Tsitsipas is undoubtedly among that number, as the Greek phenom has soared to being the fifth ranked player in the world. Tsitsipas has never been higher than 5th place in the ATP’s rankings, but he occasionally seems like a future #1 ranked player, and he’s been elite in 2021.

Tsitsipas has a record of 15-4 in 2021, and while he has not won a title in the calendar year, he’s always a favorite to do so in any ATP event.

In this one - ATP Miami - he faces off against Kei Nishikori, a player who has been ranked as high as 4th in the world over a long career.

While Nishikori is 31 years old, and almost certainly on the downswing of his illustrious career, he’s still a dangerous threat.

Tsitsipas himself voiced respect for the veteran, and such a mentality seems healthy entering this matchup.

“[Kei is] a player that has played very well in the past, and even now he can raise his level really high,”said Tsitsipas. “I'll try and be ready for the battle. It's important for me to have matches against strong opponents like him.”

On the spread, Nishikori is being spotted 4.5 games in the match, which is intriguing considering that he won the previous matchup between the two players.

Then again, that matchup was in 2018, before Tsitsipas was the player he is today, and while Nishikori was still closer to his peak.

This matchup should be exciting for tennis betting enthusiasts and fans of the sport alike.