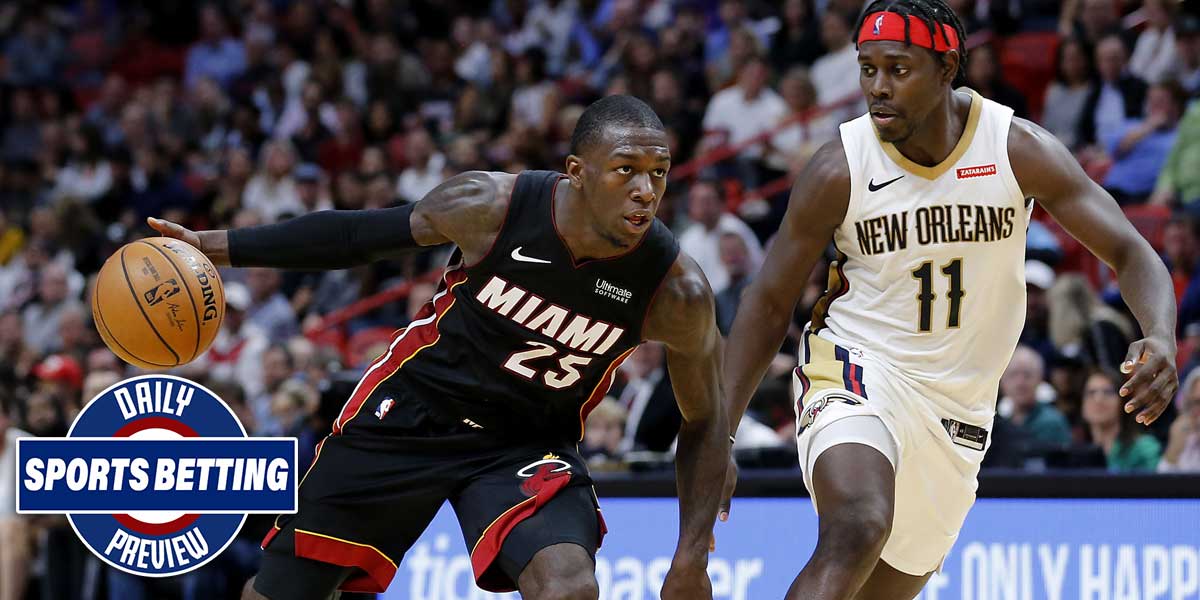 NEW ORLEANS – Today’s Daily Sports Betting Preview is all about basketball, all over the world. The Preview starts out by examining the clash between the Miami Heat and the New Orleans Pelicans in the NBA.

After that, the Preview checks out the San Diego State Aztecs, who are taking on the Boise State Broncos, in NCAA Men’s Basketball. Finally, the Preview closes out with some Euroleague action, as Anadolu Efes takes on Olympiacos.

The biggest feather in the Miami Heat’s cap this season was their ability to shut down Giannis Antetokounmpo when they played against the Milwaukee Bucks recently – they held Giannis to a season low in points.

Now, they face off against another physical freak, Zion Williamson of the New Orleans Pelicans. The Pelicans are home favorites, with a -1.5 point spread as the Heat visit the Smoothie King Center.

The Heat have an excellent defensive rotation against these kinds of players (strong, athletic big men who can dribble), starting with Bam Adebayo, one of the best big man defenders in the league, and going on down the line to players like Jimmy Butler and Andre Iguodala, who are wings that can defend up a position.

They’ll have their hands full with Zion, though. Williamson is averaging around 24 points and 7 rebounds a game, and is already the best player on the New Orleans Pelicans according to many advanced metrics.

The Pelicans have been on a little bit of a skid recently, with a 1-4 record in their last five games. Bettors should be wary when looking at the season stats for the Pelicans, as many of those games were played without Williamson on the roster.

As for the Heat, they’ve been fairly mediocre away from home, with a 13-18 record on the road, and a 12-18-1 record on the road against the spread. Bettors might take this as a warning – this spread could get a bit larger.

They stopped Giannis at home – can they stop Zion on the road? Online sportsbooks are weary of that possibility.

The San Diego State University Aztecs, fresh off of a scary game against Air Force yesterday in which they were down by double digits before coming back to win by double digits, host the Boise State Broncos in a bid to right the ship.

San Diego State is ranked fifth in the nation right now, and has been one of the very best teams in the country, with a 29-1 overall record.

They just don’t lose, and the spread for this game reflects it.

Boise State enters this game as nine point underdogs, which is a rare position for a team that has a 20-11 record overall.

The game is held at a neutral site, which limits the applicability of homecourt advantage stats, but it still could be worth looking at the stats for how the teams perform on the road – away from home, in other words.

There does appear to be a fundamental gap between these two teams, but that’s what makes the spread of nine points so dangerous.

This looks like a challenging game to bet, and it’s worth commending those that do.

Rounding out the all-basketball betting preview today, the Euroleague has five games that are on the schedule for today.

This column will focus only on one, but the Euroleague is a great competition, and if a bettor wanted to spice up their betting portfolio, the other games today would be a good place to start.

Anadolu Efes is currently the team with the most wins in the Euroleague, at the top of the standings along with Barcelona and Real Madrid, while Olympiacos has struggled, relatively speaking.

Olympiacos is 11th in Euroleague play, with 12 wins, 15 losses, and an overall point differential of -27 over that time.

This goes a long way toward explaining why the spread and the moneyline for this game are so lopsided.

Currently, the spread is Olympiacos +10. On the moneyline, Olympiacos are +400 underdogs, while Anadolu Efes are -600 favorites. These teams are longtime rivals, and today’s match will be the 38th time they have played each other this century – which is an all-time record for Euroleague play.

The match up between @AnadoluEfesSK and @olympiacosbc will be their 38th game against each other, equaling the all time record this century 🤯#GameON pic.twitter.com/mjtBwogWXR