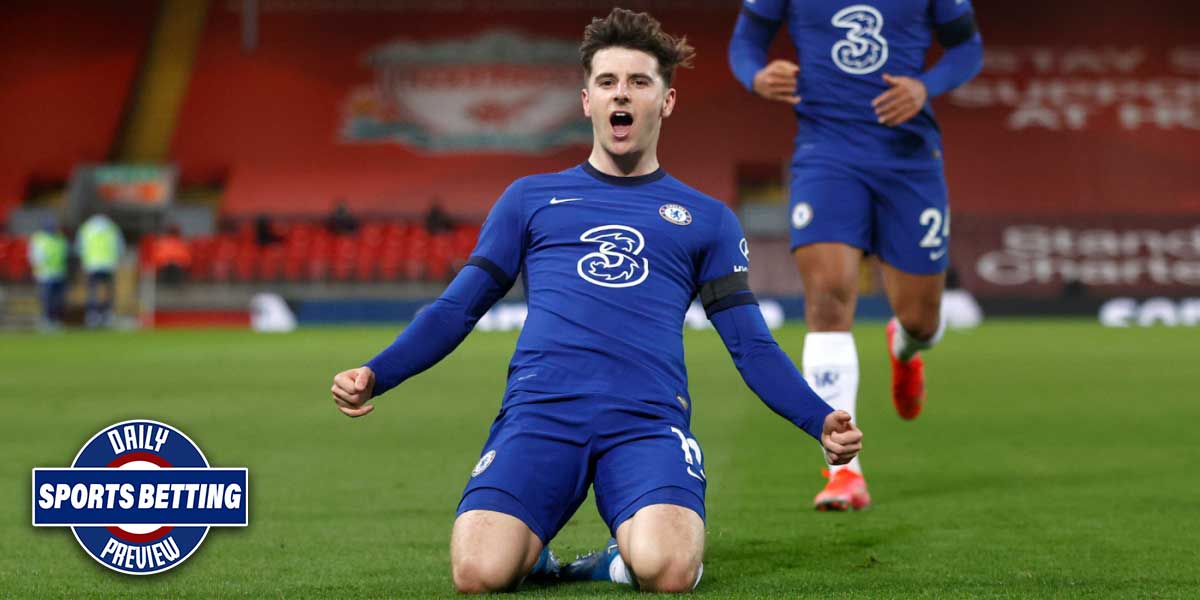 Today’s Preview kicks off with a look at the Premier League matchup between Chelsea F.C. and Everton F.C. Then, the Gonzaga Bulldogs face off against the Saint Mary’s Gaels in NCAA basketball action. Finally, in MLB Spring Training, the Los Angeles Angels take on the Milwaukee Brewers.

Chelsea, traditionally a far stronger team than Everton, are heavy favorites in this matchup. The odds for this matchup are reminiscent of Manchester City taking on Manchester United - the two teams are theoretically close together, but on the odds boards, one has a clear advantage.

Chelsea vs. Everton No Draw Moneyline

Chelsea’s -550 odds on the no-draw moneyline underscore their advantage in this matchup. It’s worth noting, however, that Everton have won their last three matches in a row, while Chelsea have won only one, with two draws.

The spread favors Chelsea by one goal, which unlocks some intriguing wagering for soccer betting enthusiasts.

One could wager on Chelsea on the spread, and accept the potential of a single goal victory being a push, in exchange for significantly better odds than Chelsea on the three-way moneyline.

However, in this matchup, goals might be hard to come by, so a one goal victory might be a very likely outcome for Chelsea.

The Saint Mary’s Gaels are set to take on the Gonzaga Bulldogs in a matchup that the sportsbooks do not seem to think will be very close.

Gonzaga, still undefeated, remain the number one team in the country, and are looking at a potentially perfect season.

They aren’t tipped to lose that record tonight, with Saint Mary’s entering this matchup as a 14-8 unranked team. Gonzaga, at 24-0, has a perfect record both at home and on the road, but the spread is a bit of a different story.

The spread for this matchup favors Gonzaga by 18 points, which is not a wholly uncommon occurrence for the Bulldogs.

These big spreads are tough to cover, even for a team as good as Gonzaga, and the Bulldogs have an 11-11-2 record against the spread. This game will be played at a neutral site, however, and Gonzaga boasts a 5-1 record in their last six neutral site games.

Saint Mary’s enters this matchup on a bit of a spread losing streak, having failed to cover the spread in five of their last six games. The spread for this matchup is surely large and likely deserves to be so.

The question for college basketball betting fans is how confident they are in Gonzaga covering a spread of this magnitude.

MLB’s Spring Training is in full swing, and MLB betting enthusiasts can start to get a picture of their favorite teams entering the 2021 season.

Both of these teams are expected to end up near the middle of the pack in the 2021 MLB season.

The Angels have +4500 odds to win the World Series, while the Brewers have +5000 odds, both far out of true contention.

This head-to-head matchup sees the Brewers as mild favorites, likely due to their home-field advantage. Andrew Heaney will likely be taking the mound for the Angels, while Brandon Woodruff appears set to be his counterpart for the Brewers.

This matchup should favor Woodruff, and therefore the Brewers, who have not only the starting pitching advantage but home-field advantage as well.

To what degree these things matter in Spring Training is up for debate, but that’s a question that MLB betting enthusiasts will have to answer when wagering on this matchup.