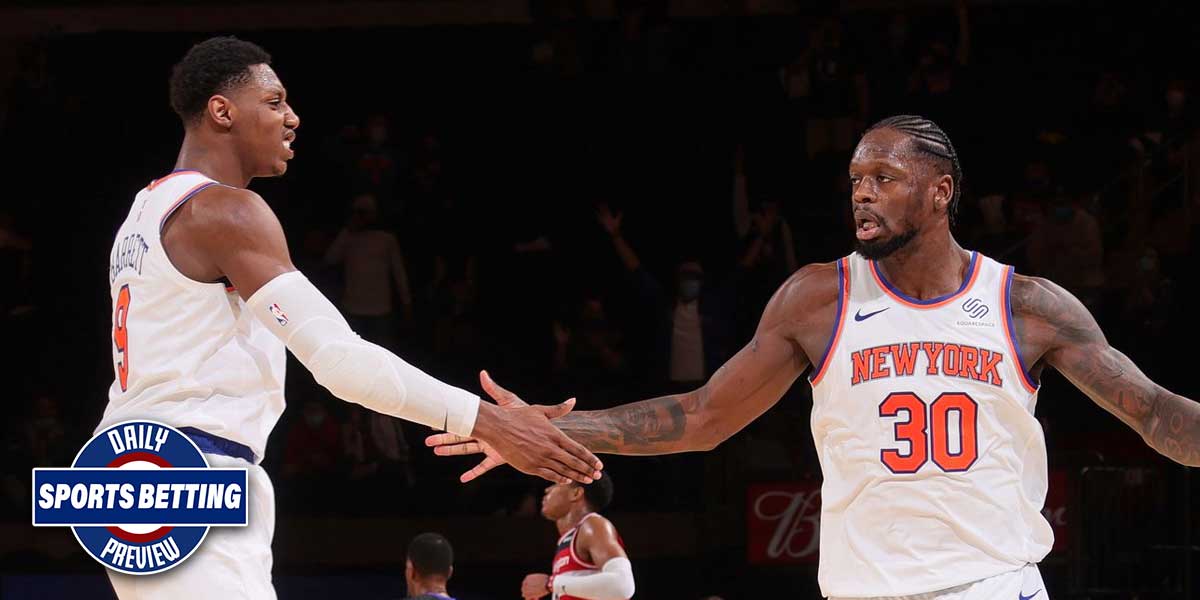 Today’s Preview kicks off with a look at the NBA matchup between the Los Angeles Lakers and the New York Knicks. Then, the Preview looks at the MLB game between the Milwaukee Brewers and the Chicago Cubs. Finally, in the NHL, the Colorado Avalanche faces off against the Arizona Coyotes.

The Los Angeles Lakers are coming off of one of their best wins of the season, a domination of the Brooklyn Nets in the absence of both Lebron James and Anthony Davis.

Today, they face off against the other team from New York, the New York Knicks, who are coasting along at 27-27.

The Lakers are on the road for this matchup, and are, of course, still missing both James and Davis, meaning there isn’t a large talent gap going either way.

The Knicks are mildly favored on the moneyline in this matchup, about as much as one would expect a generic home team to be favored against a generic away team.

Their -135 odds are a bit of a nod to their 16-10 home record over the course of the season - they’re considerably better at home than they are on the road.

The Lakers have a very good road record at 17-9, but many of those wins were racked up with James and Davis on the court - this isn’t the same team without them.

The spread is also nodding towards the Knicks’ home court advantage in this matchup, as otherwise there is very little to distinguish these two teams from each other.

The Knicks have a 15-10-1 record when playing at home, which is pretty good, all things considered, but one wonders if the online sportsbooks have a better idea of how good they are now than they did at the outset of the season.

NBA betting enthusiasts have to wonder if there is still an edge to be found in betting on the Knicks at home, as the sportsbooks could be aware of them at this point.

This game airs at 7:30 p.m. EST and is available to watch via NBA League Pass as well as local broadcasters in NY and LA.

With the MLB season roaring into gear, teams are already jockeying for position in their respective divisions.

The Chicago Cubs are fourth in the NL Central, with a record of 4-5 on the year, while their opponents, the Milwaukee Brewers, 5-4, good for second in the Central.

There isn’t a big gap between these two teams on the standings, so a win here could be meaningful for either team.

For the Brewers, it would represent another push towards the top of the standings in the division, where the Reds reside at 6-3.

For the Cubs, it would mean moving back to .500 and trying to make a similar run at the top.

The Brewers are mild favorites on the moneyline in this matchup, with -132 odds to take the dub away from the Cubs.

The Brewers could be a solid moneyline play in this matchup, given that the odds seem to put them roughly on par with the Cubs, and they are reasonably expected to be a fair bit better over the course of the year.

The Cubs have struggled on the run line, with a 3-6 record in their nine games played so far this season.

The Brewers have been fine against the run line, but again, the sample size of this statement is very low, with only nine games played for each team.

Still, Brewers -1.5 isn’t a terrible place to be considering the power within the Brewers lineup - if Christian Yelich feels like his old self for a game, he could account for that line on his own.

MLB betting enthusiasts have a couple of intriguing options when it comes to wagering on this matchup between the Cubs and the Brewers, and it’s definitely worth checking out.

This game airs at 7:40 p.m. EST and is available on MLB.TV as well as via local broadcast affiliates.

The West Division of the NHL is one that the Colorado Avalanche have dominated over the course of the current season.

Colorado is one of the very best teams in the NHL, and it’s not a surprise to see them favored against a woeful Arizona Coyotes squad

For a hockey game, this is a spread that is well outside the norm, but the gap between these two teams is stark.

The Avalanche are such a highly touted team on the moneyline, but on the puck line, they’re a bit below average.

Neither of these is far enough from average to recommend a bet either way on their own, but it’s worth noting that despite their massive goal differential, the Avalanche still aren’t excelling against the puck line.

NHL betting enthusiasts have a tough call on the moneyline, given how favored the Avalanche are, but the puck line is no easier, given how mediocre both teams are against it.

This game kicks off at 9:08 p.m. EST, and is available to watch via local broadcast affiliates.