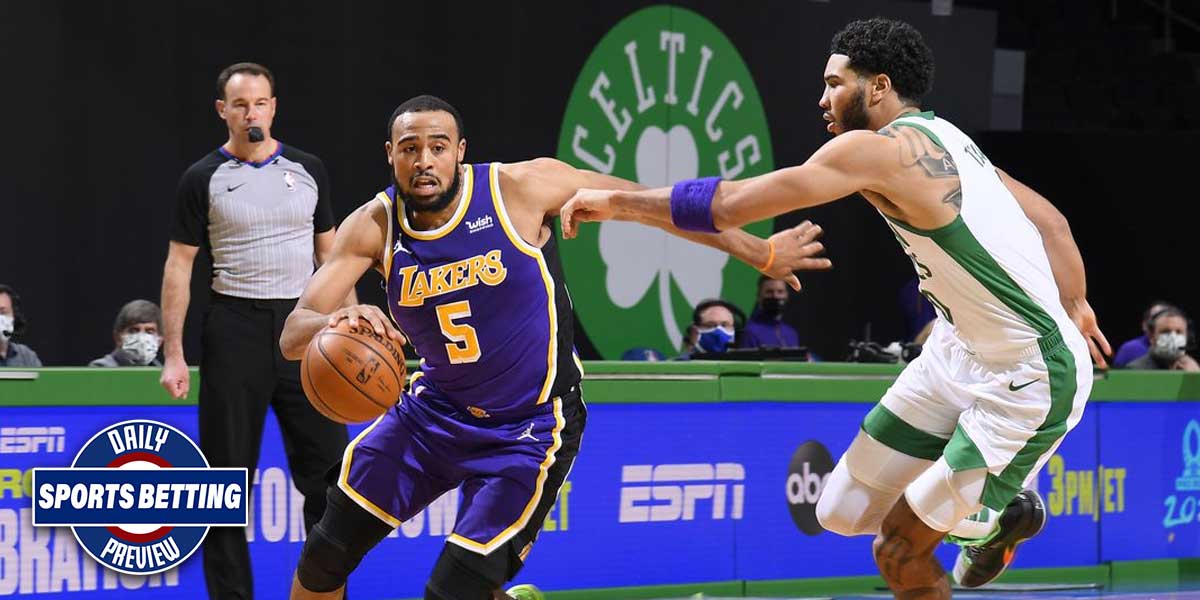 LAS VEGAS - Welcome to the Daily Sports Betting Preview on this fine Thursday!

First up on the Preview, the injury-riddled Los Angeles Lakers take on the Boston Celtics. Then, the PGA’s RBC Heritage features some solid three ball betting on day one. Finally, the CONCACAF Champions League features a matchup between Real Esteli and the Columbus Crew.

The Los Angeles Lakers are in the midst of finding themselves in the absence of Lebron James and Anthony Davis.

This process has come with good signs and bad signs, with the highest point being a victory over the Brooklyn Nets. Today, the Lakers face off against the Boston Celtics, a team that is also looking to find themselves after struggling for much of the season.

The Celtics have done admirable work in terms of finding themselves recently, winning five of their last six games.

They’re still not far over .500, with a 29-26 record, but their form has been improving, and things are looking up for them.

Even on the road, it’s likely that the Celtics will have the two best players on the court against this ailing Lakers team, so it’s not a shock to see them as significant favorites according to the online sportsbooks.

The Celtics are fairly mediocre against the spread, with an overall record of 26-28-1 ATS and a road record of 12-16 ATS.

One might ask why so much focus is being placed on the Celtics in this analysis - this is because the Lakers are functionally a completely different team without James and Davis, and data on them is limited in this context.

Still, while this matchup does seem like it favors the Celtics, it’s hard to shake the feeling that they don’t exactly deserve it given their lackluster performances this season.

NBA betting fans can approach this matchup from either side, especially on the spread, where it could go either way. This game starts at 10:00 p.m. EST and will be broadcasted by NBA League Pass and TNT.

The PGA Tour’s RBC Heritage kicks off on Thursday, and three ball betting matchups are a great way for bettors to get involved.

Let’s look at two of the most exciting three-ball matchups from the RBC Heritage.

Webb Simpson is a favorite in his three-ball betting matchup against Corey Conners and Paul Casey, but not an overwhelming one.

Much of this is due to Conners, who makes a solid case to be respected in this matchup, but Simpson is still a notable favorite.

Paul Casey comes in at the end of this one with +225 odds to beat out the other two golfers, both of whom are regarded as more talented than he is.

Collin Morikawa and Patrick Cantlay are close to neck and neck at the top of this three-ball betting matchup. Morikawa just slightly edges out Cantlay, but they’re effectively co-favorites in this matchup over Sergio Garcia.

Garcia is getting the short end of the stick here, with +260 odds to win this three-ball betting matchup. This is, in some ways, not exactly his fault - he’s been put in a group with two perennial contenders.

Golf betting fans can wager on these and other three-ball bets over the course of the tournament. The tournament can be views on the Golf Channel.

The CONCACAF Champions League has reached the second leg of the round of sixteen, and the matchup between the Columbus Crew and Real Esteli is all but over.

The Crew dominated the first leg of this matchup, winning 4-0, and simply need to avoid the reverse happening to them to move on to the quarter-finals.

Of course, beating a team 4-0 means that you’re pretty likely to be favored over them in the second leg as well, so the aggregate score could get even worse for Real Esteli.

These odds certainly seem to acknowledge the gap between these two teams, at least after the Crew made it very apparent with their 4-0 victory in the first leg.

The Crew’s -1200 odds yield a bit more than an 8% return on investment when it comes to betting on them. Whether or not that is a useful amount is up to the discretion of any given soccer betting enthusiast.

After the domination that was the first round of this matchup, the online sportsbooks have placed odds on whether or not the Crew will rack up another shutout victory.

The odds on both sides of this bet are -115, making it an effectively even wager, and soccer betting enthusiasts can look at either side of it favorably. This game begins at 8:00 p.m. EST and can be streamed using the Fox Sports App.