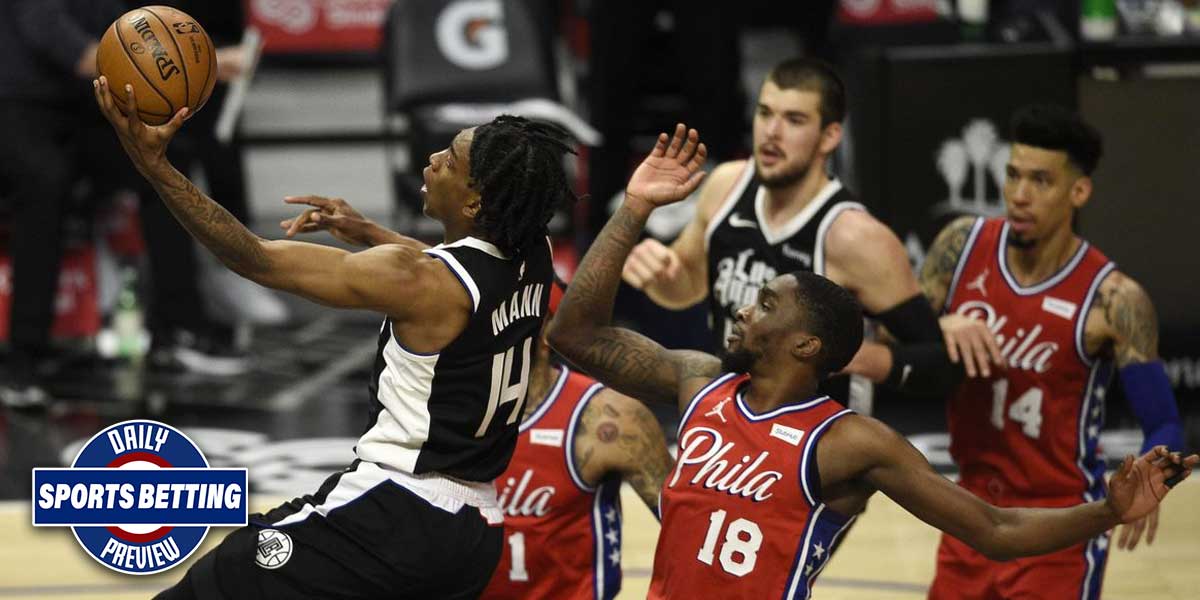 Today’s Preview kicks off with a look at the matchup between the Los Angeles Clippers and the Philadelphia 76ers. Then, at Bellator 257, Vadim Nemkov faces off against Phil Davis. Finally, in the MLS, the Houston Dynamo take on the San Jose Earthquakes.

The Los Angeles Clippers are currently in third place in the Western Conference, and are three games back of the first seeded Utah Jazz.

The Clippers have a record of 39-18, and are one of the best teams in the NBA. Their opponents on Friday are the Philadelphia 76ers, who will be the home team in this matchup.

The Sixers are notably better when playing at home, with a 21-5 straight up home record, which explains why they’re favored in the matchup.

At home, the Sixers have a 16-10 record against the spread, while on the road, that record falls to 14-13-2. In other words, betting on the Sixers’ spreads at home has been a profitable endeavor for this entire season.

Intriguingly, however the Sixers have been on a bit of a rough patch when playing as home favorites recently. In their last five games as home favorites, Philadelphia has only covered the spread one time, a remarkable statistic.

That this is true while they still have a positive ATS record overall is pretty interesting, and could speak to issues of sample size in these trends.

Still, the Sixers spread could be a solid wager for NBA betting fans when it comes to finding a good bet in this matchup.

This game airs at 7:00 p.m. EST, and will be available on ESPN and NBA League Pass.

Vadim Nemkov is the reigning Bellator Light Heavyweight Champion, and he hasn’t lost in almost exactly five years. Granted, that’s only seven fights - and only five in Bellator - but it’s still an impressive record.

Phil Davis faced off against Nemkov back in 2018, and lost that fight, in a close matchup that saw Nemkov just barely escape with the win.

Nemkov is a clear favorite going into this matchup, as he is one of the promotion’s stars, and arguably the best fighter in the promotion.

A key part of this matchup is that Davis gave Nemkov a lot of trouble in their first bout, but all the same, Nemkov still won.

The problem for Davis is that it’s hard to out-fight Nemkov en route to a decision win, but it’s impossible to actually stop him - he hasn’t been submitted or knocked out in his career.

Still, Davis fought Nemkov to a split decision in 2018, and that is by far the closest fight Nemkov has had in Bellator. If anyone is going to take the dangerous sambo practitioner down, Davis is a solid bet to do so. The problem is that it’s unlikely that anyone takes down Nemkov, even Davis.

Nemkov is more than a 1:2 favorite on the online sportsbooks even against the one fighter in Bellator that was able to go toe to toe with him.

MMA betting enthusiasts might want to lay the favorite here, but Davis has more than a puncher’s chance to surprise in this matchup.

The Houston Dynamo face off against the San Jose Earthquakes in MLS betting action as the season kicks off.

Both Houston and San Jose are predicted to end up somewhere in the middle of the pack in the MLS, with around a 50% chance to make the playoffs, according to 538.

The sportsbooks, however, see Houston as significantly advantaged in this matchup, despite similar projections for the two teams.

The Dynamo are odds on favorites in this matchup, with -110 odds to come away from this matchup with a win. The Earthquakes are pretty heavy underdogs, with the odds of their victory barely edging out the odds of a draw.

The spread of Houston -0.5 does a good job at splitting this matchup evenly, but there is still a bit of shading towards San Jose on this spread.

Still, the fact that 538 projects these two teams to have nearly identical seasons should give pause to those who wish to wager on Houston as a favorite in this matchup. Soccer bettors might be better served taking the value on the underdog, assuming 538’s projections are accurate.