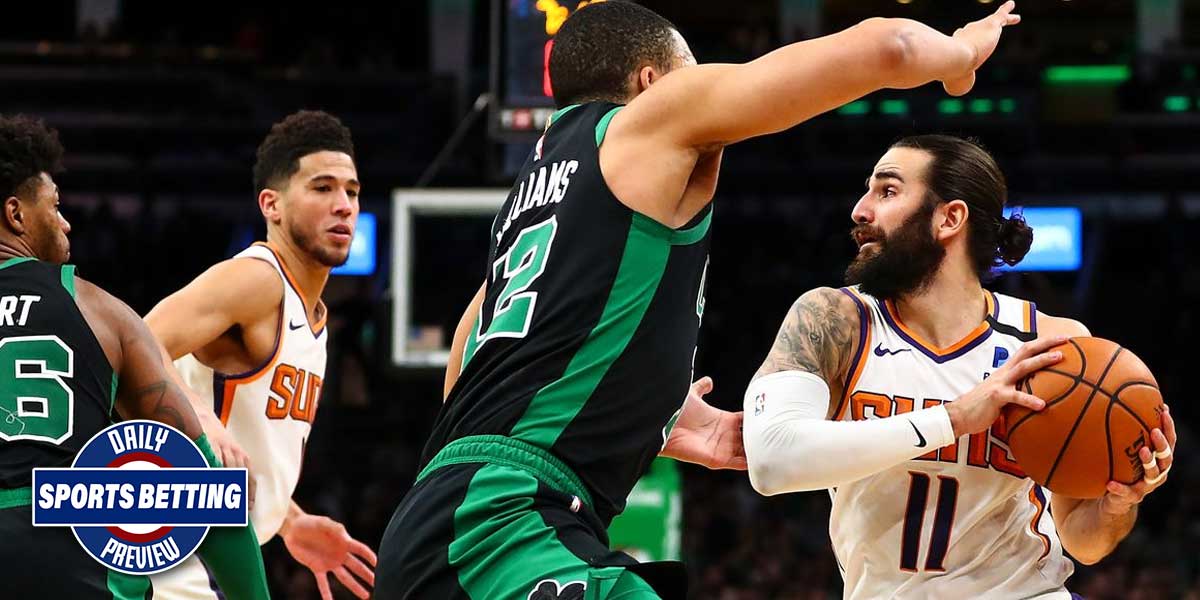 First up on the Preview, the blazing hot Phoenix Suns face off against the Boston Celtics. Then, in Serie A action, AS Roma takes on Atalanta. Finally, in the NHL, the Philadelphia Flyers take on the perplexing New York Rangers.

The Phoenix Suns have won 13 of their last 15 games, and their red-hot pace has them as one of the very best teams in the NBA.

The Suns are currently in second place in the Western Conference at 42-16, and hold the second-best record in the NBA as a whole. Their opponents today, the Boston Celtics, are improving after a poor first two-thirds of the season.

The Celtics are 31-27, but they have a record of 8-2 in their last ten games, which demonstrates the amount they’ve come on in recent weeks.

The story of the spread for this game illustrates the degree to which the betting public tends to believe in the talent on the Celtics. The game opened with the Suns favored by 6.5 points, but betting has moved that line all the way down to Suns -4.0.

This could also speak to the degree the Suns are underrated, even after being the best team in the league for a few months, and proving that they belong with the elite teams in the game.

The collapse of the European Super League means that Champions League spots are still up for grabs in Serie A.

Atalanta, currently fourth in the competition, finds itself in the mix for one of those slots, and faces off against AS Roma today in a bid to make it there. A win for Atalanta would put them in second place in the league, on 67 points, which would go a long way towards securing Champions League qualification.

They’ve been doing a lot of winning recently, winning their last five games in the league - although they did lose a Champions League matchup to Real Madrid in this time frame.

Still, it’s not a surprise to see them favored over the seventh place Roma.

Atalanta’s hot streak stands in stark contrast to Roma’s form as of late, as they’ve only won one of their last five matches.

With Lazio also on a winning streak, Roma is now fighting simply to maintain a place in the top 8 teams in the league.

Given all of this, Atalanta being favored by the online sportsbooks is not a surprise, and the fact that they are outright favorites is also not a surprise.

Atalanta’s -135 odds speak to their current form and the quality of their team, and they deserve to be the favorites in this matchup.

Soccer betting enthusiasts can wager on this matchup at 12:30 p.m. EST, and it will be broadcast on ESPN+.

The Philadelphia Flyers and the New York Rangers are right next to each other on the standings, but their goal differentials couldn’t be farther apart.

The Flyers are in sixth place in the East Division, while the Rangers are in fifth place.

It can’t be overstated what a gigantic gulf this is between two otherwise similar teams in terms of record.

The Rangers have one of the largest gaps between goal differential and actual record in the modern era of hockey, and at some point, one wonders when they’ll start making good on that.

The puck line sees the Flyers, spotted 1.5 goals, as favorites, while the Rangers -1.5 occupy the underdog spot. The Rangers are an astonishing 32-14 on the puck line this season - with numbers like that, it’s hard to bet against them.

Hockey betting enthusiasts can watch this game at 7:08 p.m. EST on local broadcasters in the Philadelphia and NY media markets.