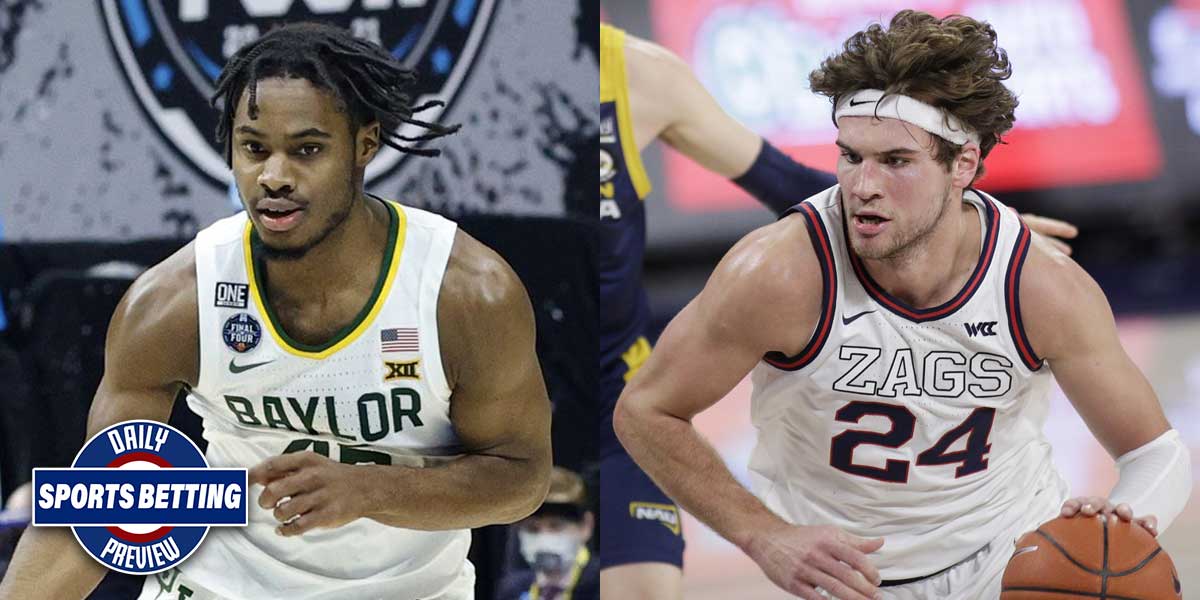 LAS VEGAS - Welcome to the Daily Sports Betting Preview on this excellent Monday.

First up on the Preview, the Baltimore Orioles face off against the New York Yankees. Then, the Baylor Bears and Gonzaga Bulldogs finally get their matchup in the Finals of the NCAA Tournament. Finally, the New York Knicks take on the Brooklyn Nets.

The MLB season has just kicked off, but it’s clear already that the Yankees are going to be favored in most of their games. Monday’s game against the Baltimore Orioles is no exception to what will likely prove to be a rule.

The Yankees are notable favorites, and the reason is obvious: one of these teams has genuine World Series aspirations this season, and it isn’t Baltimore.

The Yankees are -220 favorites in this matchup, well over 1:2 odds against the mediocre Orioles.

Jordan Montgomery takes the mound for New York, and the Yankees could really use a consistent improvement from him. Even if he doesn’t improve, he’s had a WHIP under 1.4 in all of his seasons but the 2019 season.

The Orioles are sending out Jorge Lopez, a pitcher who has never had a WHIP under 1.4 in any of his major league seasons. The matchup, even on the mound, seems tilted toward the Bronx Bombers.

The run line does a good job of evening this matchup out, making the Yankees only favored by a small margin with their handicap instead of a large one without it.

Yankees -1.5 at -125 might still be solid odds, considering the pitching matchup and the way the Yankees lineup looks.

Baseball betting enthusiasts have a choice between risk and reward when it comes to this matchup.

March Madness all comes down to this - a matchup that was originally cancelled during the season is finally coming to fruition. Baylor and Gonzaga were expected to play each other during the regular season, but COVID-19 intervened and put their matchup on hold.

Now, in the finals of the NCAA Tournament, only they remain.

Gonzaga, widely regarded as the best team in the country (and one of the best teams in college basketball history) is a favorite here.

Yes, Baylor is a fellow one seed. Yes, they’re likely the second-best team in the country. It’s not enough to keep them from being heavily unfavored.

When looking at KENPOM ratings, Gonzaga stands head and shoulders above every other team in the nation, including Baylor.

Gonzaga’s AdjEM is 38.13, while Baylor’s is 32.38, and it’s taken their whole run to get themselves to that level. Gonzaga’s AdjEM might even go down if they win this game, depending on how much they win by.

That’s the degree of separation here - by these numbers, Gonzaga is to Baylor what Baylor is to Iowa or Colorado.

The spread isn’t too far in Gonzaga’s favor, but the online sportsbooks do favor the Bulldogs by 4.5 points.

Interestingly, the shading on that line goes in Baylor’s direction, as the Bears -4.5 is favored over Gonzaga +4.5

The battle for New York kicks off on Monday, as the New York Knicks take on the Brooklyn Nets.

This isn’t a battle in the traditional sense - the Knicks will always have a devoted fanbase, and the Nets aren’t going to be dethroned as the favorite to win the Eastern Conference by the Knicks.

Still, it matters, and New York’s run of good form this season means it matters more than normal - the Knicks are the 7th seed in the East.

As seems to be the norm with the Nets, their big three is not all healthy, and will likely not all be playing.

Kevin Durant’s hamstring injury kept him out of the Nets’ clash with the Chicago Bulls on Saturday. James Harden is still listed as day-to-day, and also did not play against the Bulls due to a hamstring injury.

If both of these formidable players were on the court, the odds would likely swing far further in the favor of the Nets.

The spread of Nets -4.5 is perfectly balanced, with both sides of the bet having -110 odds.

Without Durant and Harden, the Nets lack star power and offensive punch, but they’re still likely putting the best player on the floor in the form of Kyrie Irving.

This is a game to keep an eye on - if Harden ends up playing, it could be a game changer for NBA betting enthusiasts.