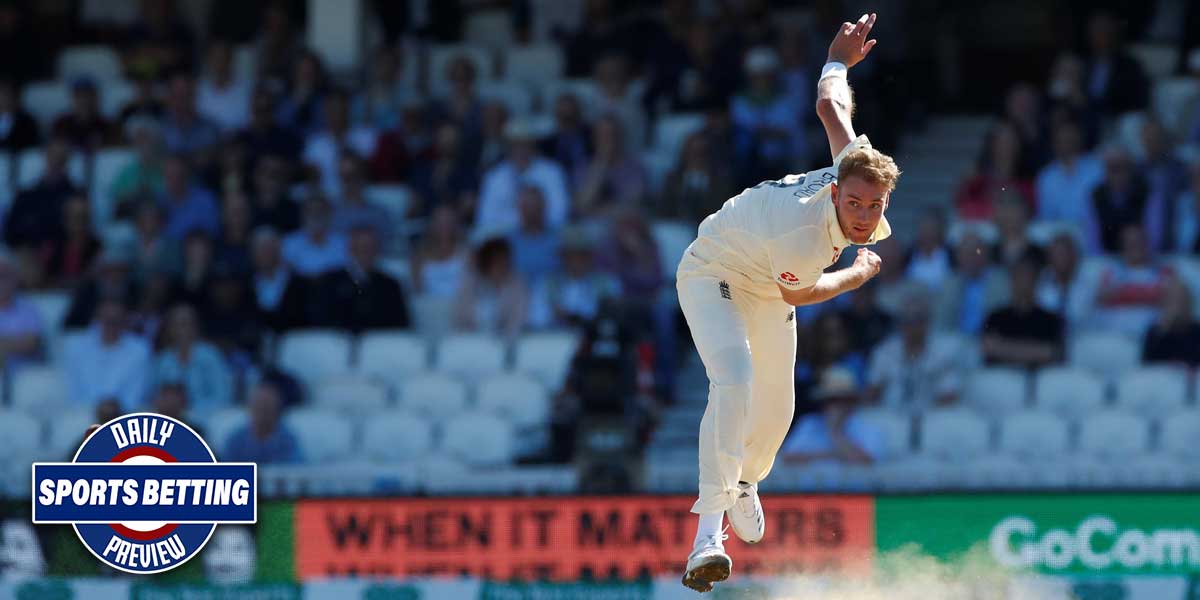 LAS VEGAS - Today’s edition of the Daily Sports Betting Preview features action from all around the globe.

First, in the world of cricket, the Vincy Premier T10 League has a match today, between the Botanic Gardens Rangers and La Soufriere Hikers.

Then, the tennis Exhibition Series carries on, with a betting slate that lasts until well into the afternoon.

Finally, the world of NFL simulation games is still chugging along in the midst of the COVID-19 pandemic, and there are interesting games to be played.

Cricket, not a sport often discussed on the Daily Sports Betting Preview, is a sport that is popular worldwide.

Today’s cricket action comes courtesy of the Vincy Premier League T10, which has a great match scheduled for today.

This match is between the Botanic Gardens Rangers and La Soufriere Hikers.

The Rangers are 4-2 on the season, while the Hikers are 5-1, each team having played six games in the league so far.

The betting odds at online sportsbooks reflect the relatively even nature of this match, as the Rangers are +105 underdogs, while the Hikers are -133 favorites.

However, there is one thing to note - there is a large discrepancy in Net Run Rate between the two teams.

Net Run Rate, for those who are unaware, is a statistic that compares runs scored to runs scored against, similar to goal difference or point differential.

The Hikers have a respectable 1.022 Net Run Rate, which puts them with the second highest in the league.

The Rangers, on the other hand, have a -0.437 Net Run Rate, which is a notable difference considering they’ve only lost one more match than the Hikers.

This could be an issue of sample size, given there have only been six matches played by each team, but it is a significant differential and could also be indicative of a quality difference between the two sides.

The Exhibition Series has been a great gift to tennis bettors across the world, and the fortunes of those who bet on tennis are once again high today, as there are exhibition matches aplenty.

Generally, the Preview has examined the Exhibition Series matches through the lens of one player, and the matches that player plays.

Today’s player is Cleeve Harper, a 19-year-old Canadian player out of the University of Texas, ranked 1482 in the ATP rankings.

The first match pits him against Oskar Michalek, and sees Harper as a -187 favorite over Michalek, indicating a relatively even match for the Exhibition Series.

Harper’s second match has him facing off against John Bernard, and once again in the driver's seat. In this match, Harper is a -465 favorite, while Bernard clocks in with +360 odds as the underdog.

Harper’s third match has him occupying the role of the underdog, however, as he faces off against Mischa Zverev, and has +150 odds to win the match. Zverev boasts -180 odds, for his part.

There can be a lot to learn in examining the betting lines of these matches, and considering the reasons why they might be the way they are.

For example, Harper’s final match pits him against Zverev, who will only have played one previous match on the day to Harper’s two.

This advantage could be what pushes Zverev over the top, as he will have played one full match less than Harper.

The world of NFL sims has received a lot of extra attention in the previous several months, as the COVID-19 pandemic ripped through the sporting world.

Sims had been around for a while, and virtual sports betting has existed for some time now, but the prominence they received during the pandemic has brought them to new heights.

There are different sim variants on nearly every one of the major online sportsbooks, and today’s sims come courtesy of the BetOnline Sportsbook, and use the Madden line of video games to simulate gameplay.

Today’s featured virtual match is between the 2019 Cleveland Browns and the 2019 Green Bay Packers.

In the real version of the season, the Packers made the NFC Championship Game, while the Browns did not even make the playoffs.

In this simulated showdown, the Packers are favored by 4.5 points on the spread, while the moneyline has them as -215 favorites.

One thing to keep in mind with these simulations: they use 15 minute quarters, so the scoring is similar to an actual NFL game.

The Over/Under line for points scored in this game is 46 points, with each side of the bet having -115 odds.

Overall, as the attention paid to the NFL sim world has increased, so has the quality of the NFL sim games that are played.