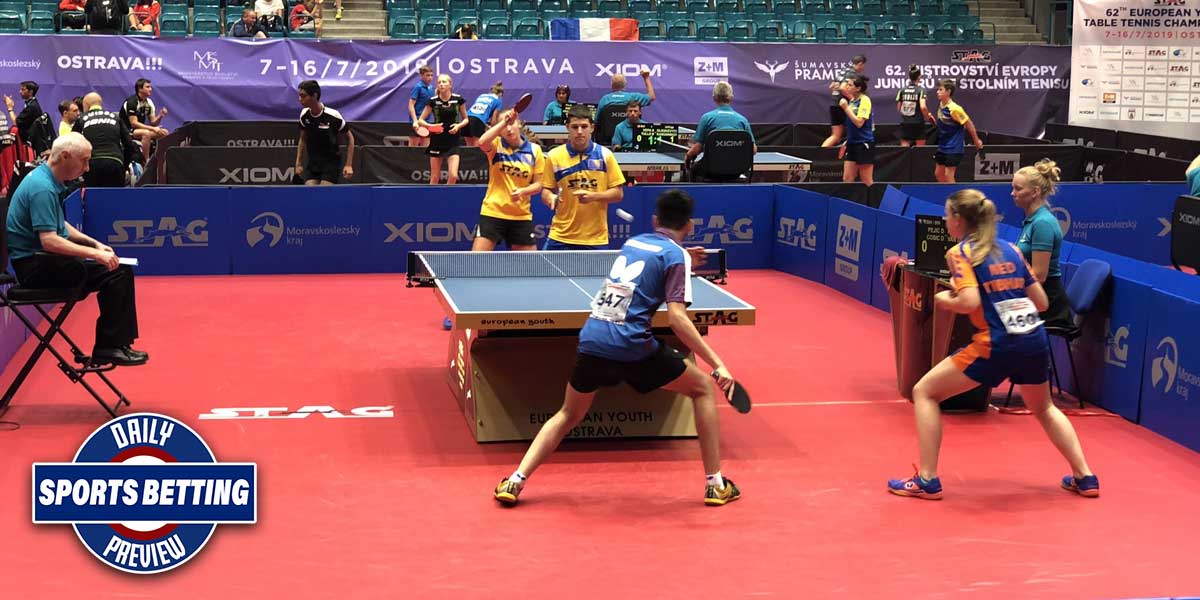 LAS VEGAS - Today’s edition of the Daily Sports Betting Preview covers sports from all around the globe.

Then, in Ukraine, the Setka Cup of table tennis should serve as a source of a large amount of bets due to the high volume of matches today.

The Portuguese Primeira Liga is back, and soccer bettors all around the world now have another good league to bet on.

The first match today is between Portimonense and Gil Vicente, who are the 17th and 9th ranked teams in the league, respectively.

The sportsbooks expect this match to be remarkably low scoring, with an Over/Under line of only two goals.

Interestingly, Gil Vicente, the 9th ranked team, is an underdog on some of the major online sportsbooks, where they have +230 odds to win the match.

Meanwhile, Portimonense, the 17th ranked team out of the 18 teams in the league, have +130 odds to win the match.

A draw has +215 odds, which makes sense given how low scoring this game is expected to be.

The second match in the Primeira Liga today is between Famalicao and FC Porto.

Porto currently leads the league, and is one of the most famous and decorated teams in Portuguese football, while Famalicao is in seventh place in the league.

Thus, it should come as no surprise that Porto are heavy favorites on the moneyline, with -225 odds to win the match outright.

It remains to be seen which of these two matches ends up being the better one, but for a lot of soccer bettors, the point is moot, and it’s just great to have one of the better European leagues available to bet on again.

The Setka Cup is a great sports betting opportunity all the way from Ukraine, and it offers a ton of matches for table tennis bettors to place wagers on.

Today, the Cup features more than 20 matches, which is enough to keep any dedicated sports bettor busy.

The Setka Cup mostly happens in the morning for those in the Eastern time zone, with the latest matches starting at 1:00 p.m. EST today.

However, it manages to pack a large amount of matches during its morning runtime, and remains a great source of table tennis betting in bulk.

One of the more interesting matches scheduled for today is between Yurii Gusak and Vladimir Myrzak, and happens later in the day, at 12:45 p.m.

The odds are similar on either side of the Over/Under line, with both the Over and the Under having -115 odds.

This will be Gusak’s second match within a two hour period, as he clashes with Vitaly Obukhov at 11:15 a.m. EST.

In this clash, Gusak is actually the favorite, with -150 odds, while Obukhov clocks in with +110 odds to win.

Myrzak also has a match in the preceding hours, as he faces off against Juli Homytovsky at 10:45 a.m. EST.

In that match, Myrzak is a -180 favorite over Homytovsky, who clocks in with +130 odds to pull off the upset.

The Counter-Strike: Global Offensive BLAST Europe Spring competition has been excellent so far for esports betting, and looks to continue that trend today.

Today’s offerings feature several excellent games, but as always, the focus is on the odds that have the most potential profit in them.

Today’s longest odds are on the match between 100 Thieves and Triumph, wherein 100 Thieves are -360 favorites, while Triumph clock in with +255 odds to pull off the upset.

Of all the matches to be played in the competition today, this is the only one to have long odds, as all of the other bets fall within an evenly handicapped match.

This makes some sense - 100 Thieves is a well-known team, with a history of high-level play in Counter-Strike.

Triumph, on the other hand, was actually formed as an Overwatch organization and entered Counter-Strike’s competitive scene at the end of 2019.

This year alone, Triumph have had eight changes to the roster, which is demonstrative of their attempts to grab a foothold in the CS:GO world.

That said, the major online sportsbooks still do not think they belong in a league with 100 Thieves, which is demonstrated by their match being the only one with odds this lopsided today.

Overall, there are a lot of great matches to bet on in terms of gameplay, but this one sticks out as far as the actual betting odds go.