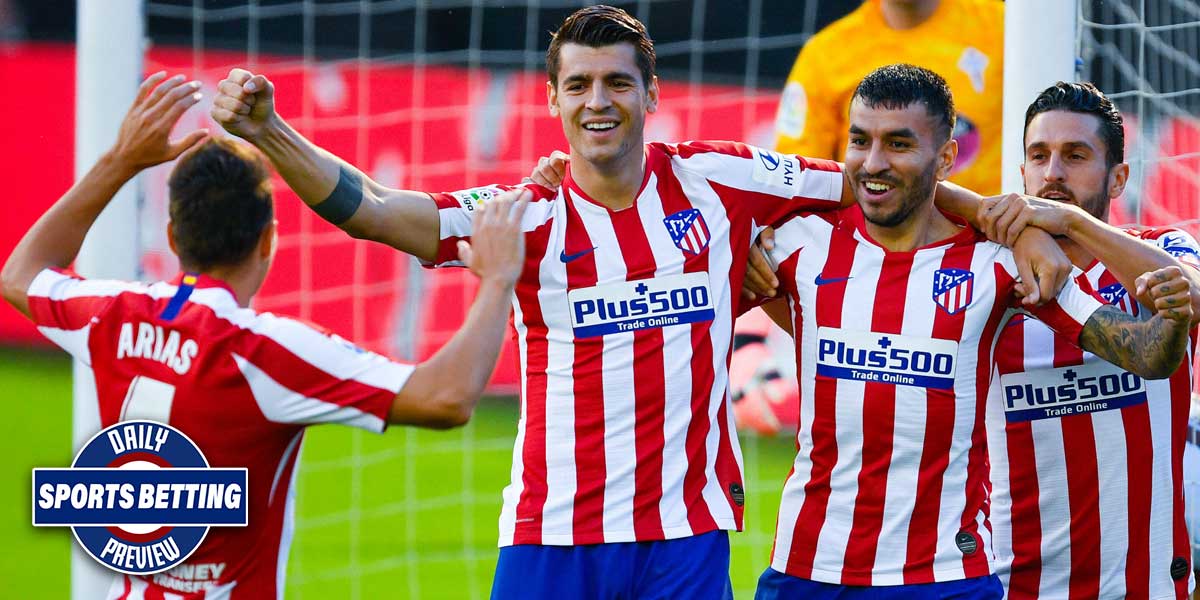 TOTTENHAM, England – In a rare Sunday edition of the Daily Sports Betting Preview, action from all around the sportsbook jumps out on the page.

In a closed out English Premier League, the final matches are set to take off this week, with Tottenham and Leicester taking that last step toward their final match of the season.

The Preview also dives into the Memorial golf betting odds, noting the impact of Rahm’s lead on the pack. With darts odds surround the World Matchplay as the close, all is covered for the morning and afternoon Sunday sports bettor.

Starting off Round 37 with only one more to go after Sunday’s battle, Leicester will travel to Tottenham to take on the Spurs at 11 a.m. EST with another EPL game without fans in attendance.

Both teams are coming off a win, but it was Leicester who won the matchup in their last meeting almost a year ago. Before this meeting, Tottenham had taken three in a row, in high scoring affairs with 4, 2, and 9 goals in each match dating backward in time.

Still, Tottenham is favored on the moneyline, but the real value may come from a side bet on Leicester. As the over-under is set at 2, 2.5 goals (-125 on the over), the individual points total for Leicester is only at 1 goal.

A standard bet can be placed here, as no shading has hit either side of this line.

While Leicester will need two goals to win this bet, a push at only 1 goal can keep soccer bettors happy to tie rather than happy to lose. In Leicester’s last 10 matches, they have scored 1+ goals in eight of the contests, while the two of those scoreless matches came in their first three games back from the restart.

Bettors have even more security when realizing that Tottenham has kept a clean sheet against Leicester only four times in the last 20 years (22 meetings).

In a similar situation over in the Spanish La Liga, Celta Vigo (+100) needs only two goals against Espanyol to hit their 1.5-goal total.

In the golf world, players are heading into the final round of the Memorial, where many were hoping Tiger Woods would have a brilliant performance. While Woods did make the cut, he sits at +2 entering Sunday – 14 strokes from the leader in John Rahm.

Rahm has a four-stroke lead on the leaderboard, sitting -12, with only Ryan Palmer and Tony Finau having a competitive -8, who are both tied for second.

The golf Memorial odds shifted heavily in Rahm’s favor as he sits as the true favorite.

Odds To Win The Memorial – Updated After Round 3

At -380 odds, one has to believe the online sportsbooks will adjust these odds shorter on the first par or birdie Rahm (2:35 p.m.) gets.

Shooting a 66 has been done eight times this tournament but has still claimed its mark as the best round. If McIlroy can pull it off, he’ll finish with a score of 280, which has the potential to be good enough to overtake Rahm.

This will require an exorbitant about help from the field as well.

Still, the former leader in Gary Woodland shot a 76 yesterday, to drop him out of the top 10, which is exactly the score Rahm needs to shoot in the final round to give McIlroy a fighting chance. No matter the hopes and dreams though, the smart money is taking any of the top five golfers.

With darts available to bet on in the early afternoon all week, getting a hand in the early matches is never a bad call.

In a 3 p.m. EST matchup, Gabriel Clemens will play Rob Cross in the World Matchplay.

Though an underdog, Clemens has beaten Cross in both of their previous meetings.

From the shading, any good sports bettor will see the darts odds shifting in favor of Clemens. With -148 juice on the spread, it should be a rather safe bet to play, though (as the odds suggest) don’t be surprised to see the fourth-ranked darts player in Cross come out and win.

Clemens HAS lost four of his five matches and Cross has certainly been the hotter hand as of late – winning six of his last eight.

The winner of this will go on to the Round of 16 to take on Krzysztof Ratajski.