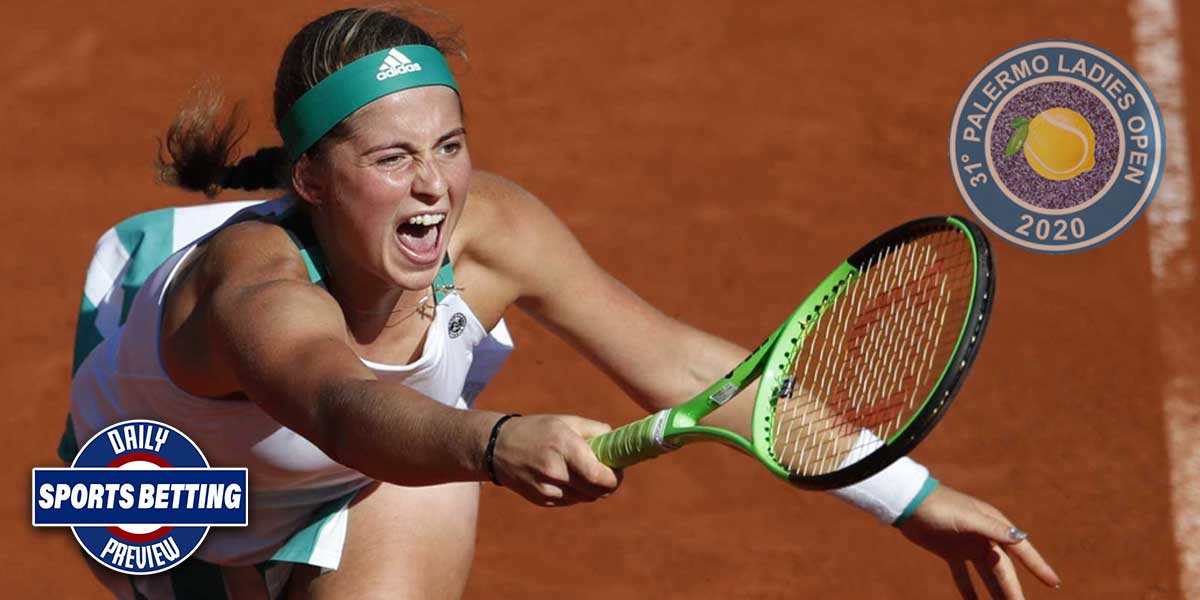 LAS VEGAS - The Daily Sports Betting Preview is back on a Monday, with some great games for all the sports bettors out there.

First, in the WTA, the Internazionali Femminili di Palermo brings a lot of great women’s tennis action, including a great match between Kristyna Pliskova and Maria Sakkari.

Then, the MLB’s season continues tonight, and the Preview checks out the game between the New York Yankees and the Philadelphia Phillies.

Finally, there are an astonishing six games in the NHL today, and several are worth reviewing.

The WTA is finally back, with a great tournament. When it comes to tennis betting, the pickings have been slim for several months now.

However, the WTA’s return has been marred by at least one positive COVID-19 test so far.

While this is not a lot in the context of some of the problems in other sports (MLB, for example), it was enough to cause some consternation. In addition, Simona Halep, widely regarded as one of the best players in the world, will not be competing in this tournament.

All of that said, the matches are great right now, especially the featured one today, as Kristyna Pliskova takes on Maria Sakkari.

Pliskova is a serious underdog in this match, with +195 odds, and it’s not hard to see why. While she is an excellent player, ranked 69th in the world right now, her opponent is a serious one.

Maria Sakkari is the 20th ranked player in the world, which is higher than Pliskova has ever been, and is several years younger than her as well.

The odds, in this context, are not a great surprise - Sakkari should be favored in a matchup against Pliskova.

The spread on the match is +/-4, which is a notable one. It’s not an incredibly high spread, but it is a fairly large one all things considered.

Both the spread and the moneyline are fairly enticing to the multitudes of deprived tennis betting enthusiasts out there, as this is the first serious tennis tournament in a while, so perhaps the focus should be on that.

The New York Yankees are absolutely smoking people right now. Aaron Judge has hit a home run in five consecutive games, becoming the first Yankee to do that since Alex Rodriguez.

They’ve lost a total of one game, and are coming off of a series sweep against their rivals, the Boston Red Sox.

Judge was, of course, key in the game, hitting what would be the game winning home run in the bottom of the eighth inning, his second of the game. One possible weakness of the Yankees is that their pitching staff, outside of newly acquired ace Gerrit Cole, has some holes and problems.

Luis Severino is still out, which means that the quality of the pitching drops off hard after Cole.

That said, when Cole is on the mound, the Yankees are nigh-unbeatable, and their baseball odds have already started reflecting this - the Yankees are generally incredibly favored on days where Cole starts.

For example, today, Cole takes the mound against the Philadelphia Phillies, and the moneyline is serious.

These are the kind of moneyline odds that are only available in games where the Yankees are involved and Cole is on the mound.

The only other team that tends to approach these odds is the Los Angeles Dodgers, but the Yankees have, so far, demonstrated a remarkable consistency when it comes to being around -300 against anyone when Cole pitches.

For their part, the Phillies are coming off of a layover due to positive COVID-19 tests among their team after a series against the heavily infected Miami Marlins.

Talk about a bad beat.

They are very rightful underdogs in this game, as they are likely not good enough to approach the level the Yankees can play at when Cole is on the mound.

The NHL appears to have knocked it out of the park when it comes to the formatting of their restart.

The NHL restart seems complicated to begin with, but all that really matters for NHL bettors and fans is that there are a ton of playoff hockey games to bet on.

Since there are so many, it seemed prudent to examine all of them. This column does not have unlimited words, so it will be brief, but all of the games today are worth betting on.

The first game of the day kicks off at 12:00 p.m. EST and features the New York Rangers battling against the Carolina Hurricanes. The Rangers are +120 underdogs, while the Hurricanes, as favorites, have -140 odds.

At 2:30, the Winnipeg Jets look to pull off the upset against the Calgary Flames. This game occurs in the wake of a dust up between the two teams that left Jets centre Mark Scheifele injured, and Jets Coach Paul Maurice accusing the Flames of injuring Scheifele intentionally. This one could be a serious battle.

At 4 p.m., the Washington Capitals take on the Tampa Bay Lighting, as underdogs. The Caps are fairly slight underdogs at +115, which ties them with the Dallas Stars (against the Vegas Golden Knights) as today’s second closest underdogs (behind Chicago).

Speaking of the Stars and the Golden Knights, the 2018 Stanley Cup finalists are in a dominating position against the Dallas Stars, although their leading odds seem a bit precarious. They’re slight but significant favorites on the moneyline.

At 8 p.m., the Pittsburgh Penguins will open as the heaviest favorite on the day, with -165 odds. The next most favored team is the Calgary Flames, at -155. The Penguins are a good team, but they lost game one against the remarkably unfavored Canadiens, so who knows what could happen in this one?

The final game of the day starts at 10:30 p.m., which marks the end of nearly 12 hours of hockey today. The Edmonton Oilers are -130 favorites on the moneyline, but are down in the series after a sublime performance from the Blackhawks in game one. There are several teams that are down in the series but up on the odds boards, which is an interesting situation.