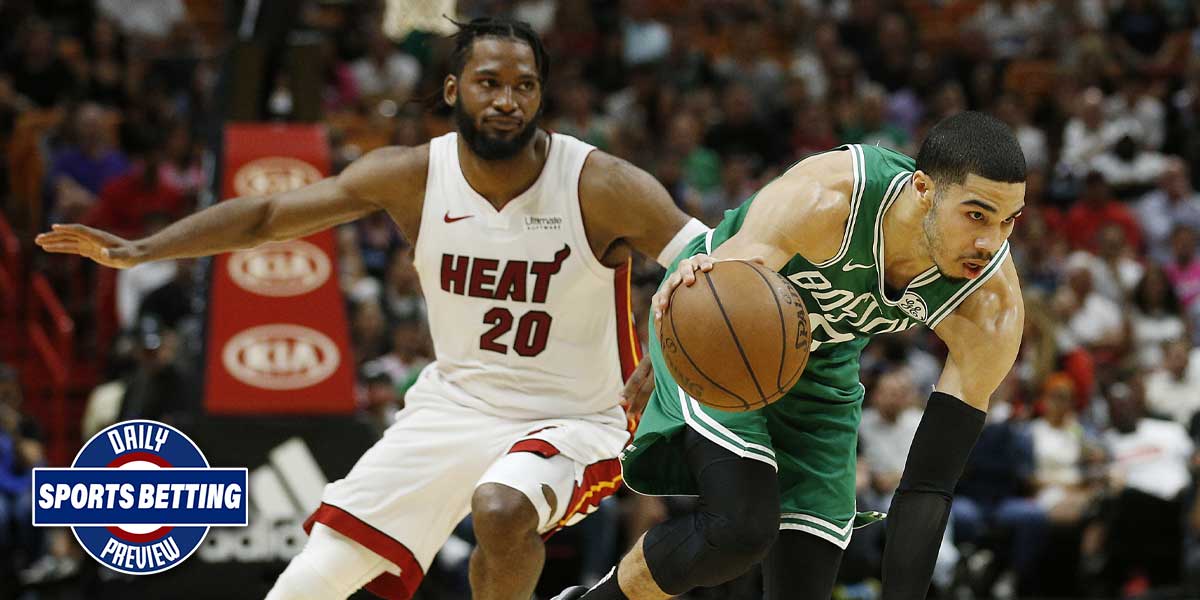 LAS VEGAS - Welcome to this Tuesday edition of the Daily Sports Betting Preview! Today’s Preview looks like a great one.

First, in the NBA, the Preview takes a look at two of the best matchups in the league, as great teams collide today.

Then, in the NHL, the expanded playoff format continues as there are several games today.

Finally, in the WTA, there are yet more matches to cover from the WTA Palermo tournament.

There are two excellent games to discuss in the NBA today. The first of them is between the Boston Celtics and the Miami Heat.

The Celtics and the Heat are powerhouse Eastern Conference teams, although the Celtics are generally regarded to have better chances in the postseason.

That said, the Heat are no slouches, with a team built around Jimmy Butler, tough defense, and hustle.

The Celtics are pretty serious moneyline favorites in this matchup, with -167 odds to win the match outright.

For their part, the Heat clock in with +147 odds on the moneyline, making them a respectable underdog.

The spread in the match is a fairly reasonable +/-3.5. If anything, it seems a bit low given the amount the Celtics are favored by on the moneyline.

The next great game today is between the Portland Trailblazers and the Houston Rockets, two incredibly fun teams to watch.

The Trailblazers are led by Damian Lillard, who is having one of the best seasons for an elite shooter in a long time, putting up around 29 points per game on 45% three-point shooting.

The Rockets are fresh off of a victory against the Milwaukee Bucks in which Russell Westbrook, not James Harden, was the key. These are both teams that have excellent and dynamic players, despite the Rockets’ tendency to revert to chucking three-pointers at every opportunity.

The Rockets are riding high right now, fresh off of their victory against the league-leading Milwaukee Bucks.

In that victory, they shot 61 three-pointers and made 34% of them, and that pretty much sums up who the Rockets are.

They shoot an astounding amount of threes, and they make enough of them to justify shooting, but they aren’t exactly elite at three point making, they just take a ton of them.

The Blazers, meanwhile, are working with one of the best players in the league, but can’t seem to make the squad around him work out consistently.

The spread in this matchup is 4.5, and this is a tough spread to analyze. Both of these teams have a significant amount of variance involved in their scoring.

The Rockets especially are going to rely heavily on the three-ball, but the Blazers do as well, in the form of Damian Lillard.

Two three-pointers going in late could seriously change not just the game, but the bets that people have placed on the spread.

NBA bettors would be wise to consider this angle before placing wagers on the game.

The NHL’s expanded playoff format has been a great success so far, from the perspective of many NHL bettors.

There are hockey games on constantly, and all of them are tough, hard-fought playoff matchups. This means that there are a ton of different ways for NHL bettors to wager on the sport that they love.

In addition, there is not much of a better time to get involved in NHL betting than right now.

Let’s check out one of the best games from today.

The Jets pulled off a victory yesterday to even the series at 1-1, but the bad blood lingers between the two teams.

In Game 1 of the series, the Flames’ Matthew Tkachuk did some serious damage to Jets star Mark Scheifele with what Jets coach Paul Maurice termed a “filthy, dirty kick”.

Now, the series is even, and the two teams are battling for more than just playoff glory. Maurice, after the game two win, stated that he stood by everything he said after the first game about Tkachuk’s play.

“I think he plays at a level, he’s on the edge," said Maurice. “He crosses it sometimes, and he crossed it — in my mind — clearly. That’s exactly how I feel about it.”

The Flames are favored, and the amount that they are favored is due in no small part to the absence of Scheifele.

The WTA’s tournament in Palermo, which marked the return of Women’s Tennis amidst the COVID-19 pandemic, has provided tennis betting fans with consistent top level tennis play for the first time in months.

Each day, there are great betting opportunities for the discerning tennis bettor to take advantage of.

Let’s take a look at a great matchup, as Petra Martic takes on Alison Van Uytvanck.

These are some seriously lopsided odds. Martic’s -305 odds make her a prohibitive favorite in this matchup.

This is worth considering because while Martic is significantly higher ranked than Van Uytvanck, there is some degree of rust that comes with the first professional level competition in months.

Tennis bettors would be wise to consider all angles before wagering on this matchup.