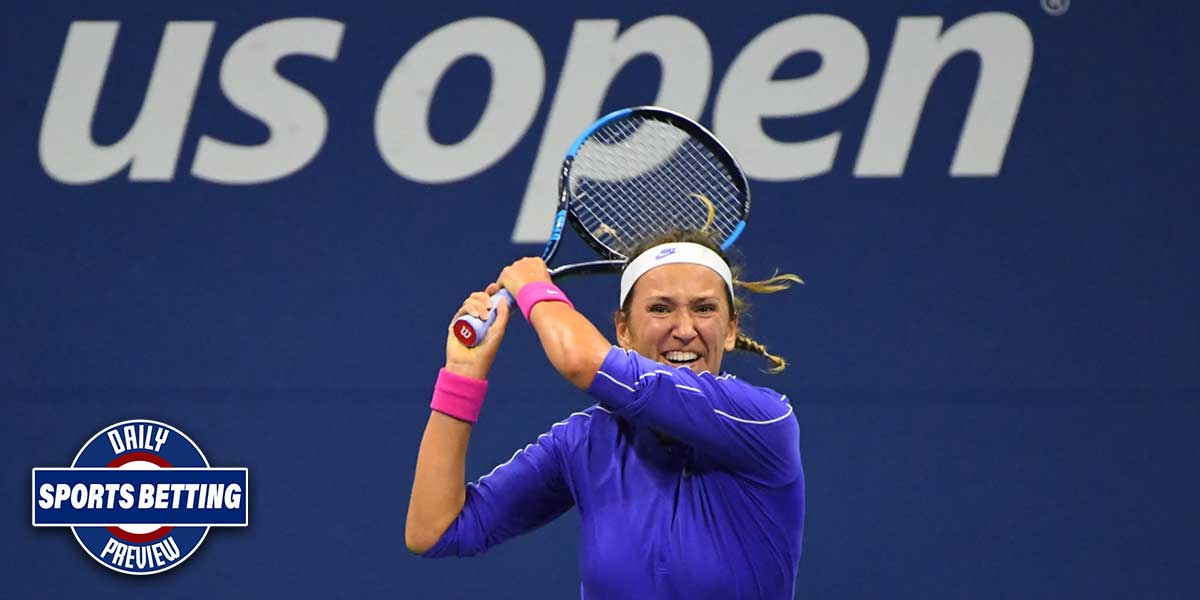 First, the US Open continues today on the women’s side with two high profile matches.

Then, the PGA Safeway Open kicks off today, and the odds are quite interesting. Finally, the NHL Playoffs continue as the Vegas Golden Knights and the Dallas Stars look to break their 1-1 deadlock.

The US Open is down to only a few matches left in both the Men’s and Women’s divisions.

In the Women’s tournament, there are two matches today. The first is between Naomi Osaka and Jennifer Brady.

In this match, Osaka is a four game favorite over Brady, although there is some shading on that line towards Brady.

Osaka is ranked 9th in the world while Brady is ranked 41st, which represents the difference in their relative skill levels fairly appropriately.

The second match is a bit closer on the spread, and is between Serena Williams and Victoria Azarenka.

This match is remarkably close. Serena finds herself as a one game underdog to Azarenka, with a bit of additional shade on the line towards Azarenka.

Rankings-watchers will note that Serena is ranked eighth in the world while Azarenka is 27th.

However, their relative form in their respective last matches might be a big reason why this line is the way it is.

Serena struggled but overcame Tsvetana Pironkova in order to reach this point.

Azarenka, meanwhile, dominated her quarterfinals opponent, defeating Elise Mertens in only 73 minutes, with a score of 6-1, 6-0.

Given this, it’s not hard to see why the odds are set the way they are. Could it be time to bet on an underdog Serena? Will Azarenka’s amazing form continue?

Tennis bettors will be able to find out on Thursday.

The Safeway Open starts at 10:00 a.m. EST on Thursday, and features one of the most wide open betting fields in a long time.

The biggest reason for the openness of the field is that many of the top competitors in the PGA will not be participating in this event.

This situation has given rise to odds that look completely different from most PGA events.

Phil Mickelson, incredibly, leads the odds boards with +2000 odds to win the Safeway Open this year.

Mickelson, who hasn’t won a PGA Tour event since 2019, sits alone at the top of the odds boards, but is closely followed by the likes of Brendan Steele and Si Woo Kim.

Jordan Speith sits at +2500 odds and could be an interesting play in a field this wide open.

There are a couple other interesting names in this list, like Chez Reavie, who could take this tournament.

The fundamental reality of this tournament is that there are no huge favorites. Mickelson leads the field, yes, but his +2000 odds do not inspire confidence.

This could be a tournament where the more knowledgeable PGA bettors manage to gain advantages.

Regardless, the opening of the PGA Tour season is definitely one to keep an eye on.

The Vegas Golden Knights are set to face off against the Dallas Stars to break their 1-1 deadlock.

The Golden Knights enter this matchup favored, as they have every game.

The Golden Knights are a good team, and they’ve been electric recently - they have a record of 23-7 in their last 30 games.

However, there is one important trend working against them - rest. The Golden Knights are 1-4 in their last five games on one day’s rest - which today’s game is.

In addition, the Stars actually excel in this scenario, at least recently. In Dallas’ last 11 games on one day’s rest, they have a record of 8-3.

In addition, Dallas has been playing a bit above their pay grade in these playoffs - the Stars sit in this position despite some unfortunate averages.

This is by far the worst ratio of the teams remaining in the playoffs - it’s borderline miraculous that they’ve made it this far.

In fact, of the four remaining teams, they’re the only one who give up more than 2.5 goals on average in the playoffs.

The fundamentals of this matchup are that the Golden Knights should be better on any given day than the Dallas Stars.

There are some countervailing factors like rest to take into account however, and Dallas has been pulling wins out of nowhere recently.

The series is knotted at 1-1 for a reason - Dallas might not go away that easily.