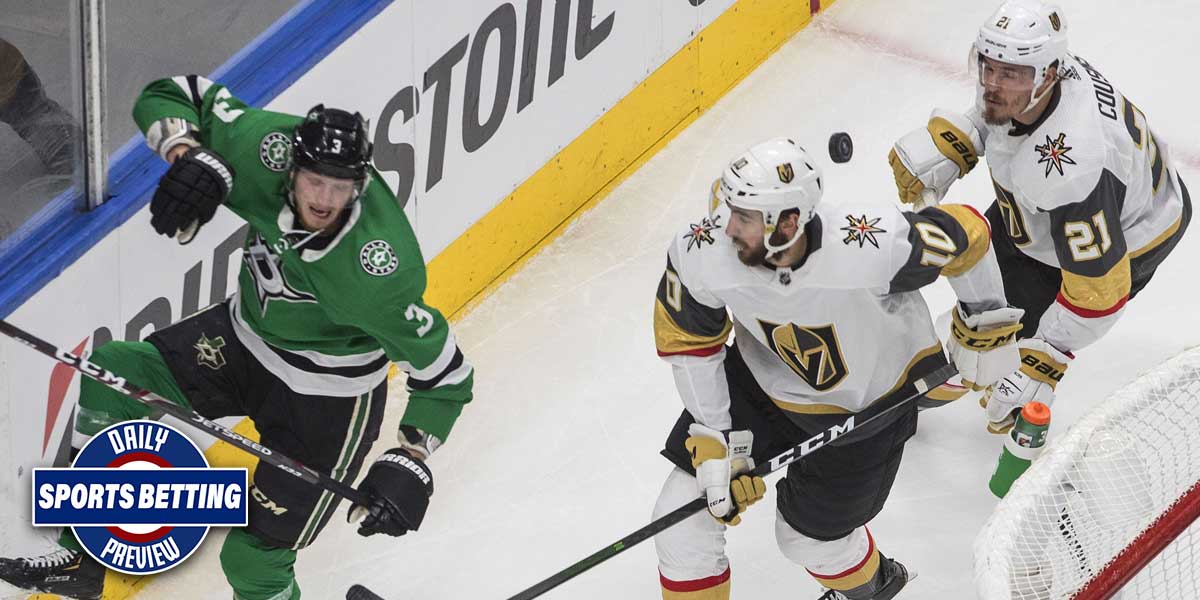 Today, the Preview kicks off with a discussion of the matchup between the Dallas Stars and the Vegas Golden Knights. Then, in the Premier League’s return, Chelsea face off against Brighton.

Finally, in MLB, the Atlanta Braves battle the Baltimore Orioles.

Without further ado, let’s get started!

The Dallas Stars have been making what can only be described as an improbable run through the playoffs.

If the Stars win this game, they could go to the Stanley Cup Finals without having a positive goal differential.

The team they face off against, the Vegas Golden Knights, have much better statistical numbers, but have not converted those numbers into wins.

Fittingly, all of Dallas’ wins in this series have been close. They won Game 1, Game 3 and Game 4 by one goal each. They lost Game 2 by three goals. In other words, despite the 3-1 score, the two teams have scored an equal amount of goals across the series.

The moneyline in each game has favored the Golden Knights, and this game is no exception.

The Stars are +150 underdogs to close out this series, but they’ve been similar underdogs in every single game they’ve won.

It’s not hard to see why. They could reasonably be described as worse than Vegas, all else held equal.

That said, the fact that they’ve managed to scrape out those wins does matter - going up 3-1 in a series gives you a huge advantage in the series, even if you aren’t favored game to game.

Because of this, the series prices are very different from the game odds.

Even if the Stars aren’t favored to win this game, the NHL sportsbooks think they’ll pull a win off eventually.

The Premier League is back as of a few days ago, and that is excellent news for soccer bettors across the world.

Although it must be noted that many of those bettors across the world would call it football.

Today, Brighton faces off against Chelsea, in a chance for Chelsea to see what they have in their top new signings, Timo Werner and Kai Havertz.

Havertz is expected to make his #CFC debut from the start tonight. It was a deal long in the making as explained in detail below. New subscribers can take advantage of a £1/month offer to read it here: https://t.co/myoJMOVWLd https://t.co/TcBGXyxowS

The pair of players is expected to elevate Chelsea significantly, and perhaps put them into serious contention for the league. Dealing with a team like Brighton should be no problem if Chelsea is the team they are expected to be.

However, expectations can be tricky.

The moneyline odds see a Chelsea victory as the most likely of the possible outcomes, with -180 odds.

The spread, however, seems a bit less generous when it comes to Chelsea’s chances. They have a -1 handicap, but only have even odds on that handicap.

This puts soccer bettors in an interesting spot. Chelsea should be much better than Brighton, but the twofold questions that must be answered are:

How much better are they? What effect will playstyle have on the scoring?

It is entirely possible for Chelsea to be much better than Brighton, but, due to defensive prowess, keep the score low, which would explain the fairly limited spread.

This looks like an interesting matchup to wager on.

The Baltimore Orioles are back where they belong - near the bottom of the AL East. After a brief resurgence at the beginning of the season, they’ve found themselves losing a lot of games.

The Orioles sit at 20-26, which honestly might be a better record than they expected to have at this point in the season.

That said, only the ailing Boston Red Sox are below them in the AL East, and they look likely to pick up another L today as they face off against the Atlanta Braves.

The Braves are 28-19 and have won four of their last five games entering the series with the Orioles.

The moneyline, understandably, favors the Braves.

The odds on this match are pretty interesting, but what really sticks out is the Over/Under line for runs scored.

The line is set at 10.0 runs, which is higher than any other game today by a fair margin.

This is, fundamentally, a comment on the power of the Braves, and the relative lack of quality that the Orioles have in terms of pitching and fielding.

Both the moneyline and the Over/Under line provide interesting betting opportunities to MLB bettors this Monday.