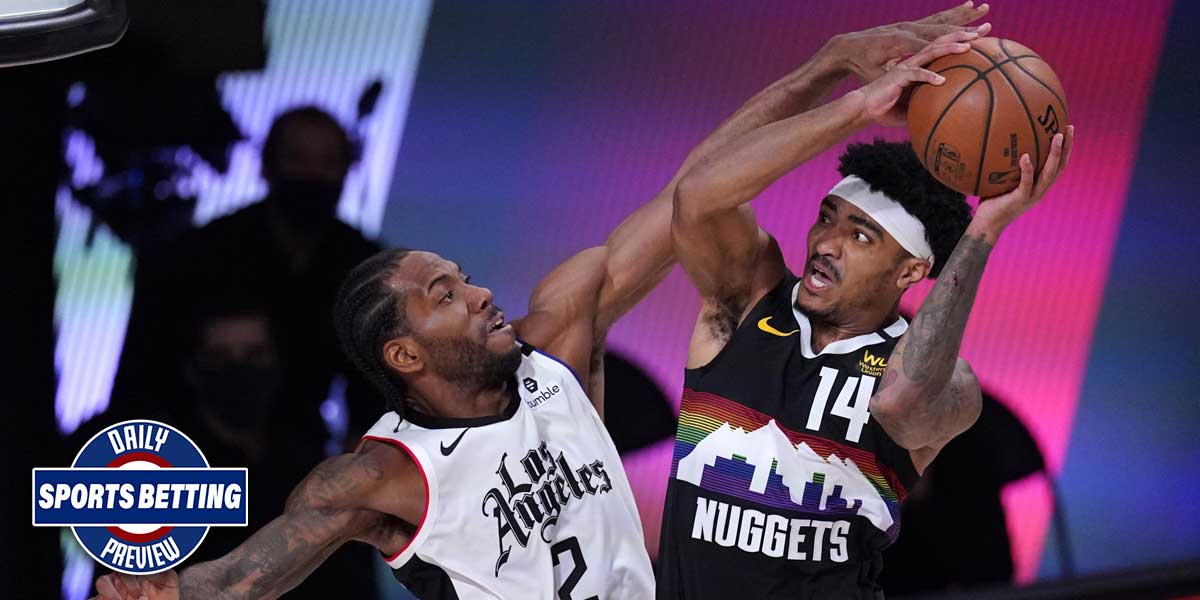 First, in the NBA, the final game of the series between the Denver Nuggets and Los Angeles Clippers is set to kick off Tuesday night. Then, in the NHL, the Tampa Bay Lightning have a shot to end their series against the New York Islanders early.

Finally, in MLB, the Preview takes a look at a normal game - between the New York Yankees and the Toronto Blue Jays.

The Los Angeles Clippers have been underperforming - there’s no two ways about it.

The Clippers, who have been at times the team with the shortest odds to win the NBA Championship, are deadlocked with the Denver Nuggets.

After going up 3-1 in the series, the Nuggets roared back in Games 5 and 6 in order to force this Game 7. Now, with everything on the line, who is going to step up?

The books have the Clippers as -310 favorites to win this game, despite the series demonstrating that these teams might be more evenly matched than many believed.

The spread is also interesting considering the Nuggets have won the last two games.

On the one hand, it’s surprising that a Game 7 has such lopsided odds. On the other, it’s unsurprising that the sportsbooks are sticking to their prior assumptions - that the Clippers are just flat out better than the Nuggets.

This looks to be a very interesting matchup, both on the court and on the NBA sportsbooks.

Speaking of Game 7’s, the Tampa Bay Lightning are looking to avoid all potential of one of those happening to them.

The Lightning are up 3-1 on the New York Islanders, and while their dominance seemed a bit shaky after Game 3, they bounced back in Game 4.

Dominance is the right word to describe the Lightning in this series. They’ve outscored New York by nine goals over the course of the four games played so far.

Granted, a lot of those goals are due to the massive differential in Game 1, which ended 8-2 in favor of the Lightning.

That said, it’s hard to ignore that they won a game 8-2. Generally speaking, evenly matched teams don’t have games that end 8-2.

On the moneyline, the Lightning are favorites in this matchup, as they have been all series, and as they have deserved.

They’ve done well, and put themselves in a position to make the Stanley Cup Finals with a win in any of the next three (potential) games.

The puck line is also compelling in this matchup.

Interestingly, the puck line handicap of +/- 1.5 flips the odds on their head almost exactly, leaving the Lightning as underdogs and the Islanders favored.

This matchup should be a good one - the Islanders have their backs against the wall, and it will be interesting to see what Barry Trotz comes up with.

NHL bettors should obviously have their eyes on this one.

Today’s MLB betting is a bit less exciting than the other two sports - no playoff games here. However, the game to be highlighted does have some potential playoff implications.

The New York Yankees, who started as one of the best teams in baseball, now sit in third place in the AL East.

It is worth mentioning, however, that the AL East is very good, and both the Yankees and the second place Toronto Blue Jays would be in the playoffs if the season ended today.

Both teams have to win nine more games in order to clinch a playoff spot as of right now, so their matchups against each other are important as they jockey for position.

Neither team is in particularly good form - in fact, over the last ten games, nobody in the AL East has a better record than 6-4 (the Jays) and four of the five teams have a record of 5-5.

Perhaps the division as a whole got off to a hot start and then cooled down.

Interestingly, the MLB sportsbooks seem to like the Yankees still as far as world series futures betting goes.

Let’s take a look at the AL East standings and then the AL East World Series odds for just a moment.

The respective odds for the Yankees and the Jays stick out like a sore thumb. The Yankees have the third best odds overall to win the World Series, while the Jays are down at +2500.

This could be an interesting betting opportunity depending on the prior assumptions being made - the sportsbooks are clearly sticking to their guns and seeing the Yankees as a playoff threat, no matter what.