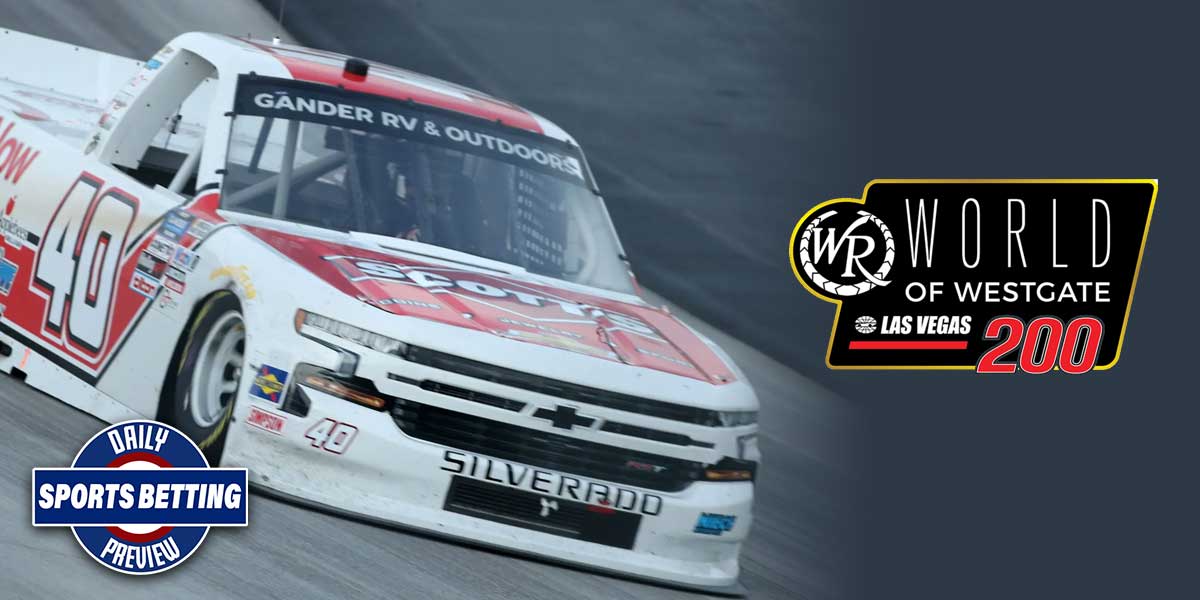 First, the World of Westgate race takes place in the NASCAR Truck Series at Las Vegas Motor Speedway. Then, Hertha Berlin face off against Eintracht Frankfurt in Bundesliga action.

Finally, the Miami Heat look to close out the Eastern Conference Finals, and sports bettors can look for prop bets on the matchup.

The NASCAR Truck Series rolls into Las Vegas for a time, and kicks off a weekend of NASCAR betting action.

The World of Westgate 200 takes place at Las Vegas Motor Speedway, and features some of the best drivers in the Truck Series.

Austin Hill tops the odds boards for this race. Hill, 8th in the Truck Series is a full-time Truck Series competitor who also competes in the Xfinity Series.

More generally, bettors will notice tiers emerging in the race odds - Hill and Brett Moffitt occupy the first tier, Sheldon Creed, Zane Smith and Christian Eckes occupy the next, and so on.

The odds really start to lengthen after Grant Enfinger’s +1000, after which the next closest competitor is +1500 and then +2200.

In other words, the serious threats to win this race are the top seven or so drivers on the odds board.

Brett Moffitt is, as always, worth a look. Moffitt leads the Truck Series generally, and also starts this race in pole position.

A top tier driver in pole position enjoying second-place odds means that his +450 odds at winning the race are definitely interesting to NASCAR betting followers.

The Bundesliga is back, and today’s matchup is a quality one, although not necessarily an incredibly high level one.

On last year’s table, these were the number 9 and number 10 teams in Germany - quality teams, not really threats to win the league, but well clear of relegation.

What that means, of course, is that this matchup should be fairly even, leaving lots of opportunity for sports bettors.

Hertha are favored on the moneyline, but not overwhelmingly so, with +125 odds to win, while Frankfurt boast +190 odds.

A draw has +270 odds, making it the least likely option.

Last season being so close to this season means that bettors might be able to look to last season to see if there’s any actionable information.

For example, Hertha lost four of their last five games down the end of last season, which could represent poor form entering this one.

On the other hand, they’ve won the one game they’ve played in the current fledgling Bundesliga season.

The Over/Under line for the matchup is set at three goals, which is a relatively low number, but not an entirely inaccurate one.

This looks to be a quality game of soccer between two relatively evenly matched teams, and that should be a fine spectacle for soccer bettors to enjoy.

The Eastern Conference Finals make their return today, as the Miami Heat look to lock up the series.

The Heat enters the game with a 3-1 lead and having outscored the Celtics dramatically in crunch time.

The #Celtics have allowed 144.4(!) points per 100 possessions during clutch situations against the Heat this series. They also have been outscored by 23 points in crunch time over four games. https://t.co/fClMrirLbx

The overall points scored for the series is actually tied - both teams have scored the same number of points through four games.

However, the Heat’s remarkable clutch performances put them ahead of the Celtics 3-1.

The Miami Heat are once again underdogs on the spread, and, given how the clutch scoring has gone, one wonders if this is a smart line.

Again keeping in mind the clutch scoring, and assuming the teams keep it close, it might be a good idea to wager on Miami in the second half and fourth quarter.

These odds might not be available immediately at every sportsbook, but will be up during the game as a part of live betting odds.

Similarly, there are interesting props that can reflect on how close the series has been overall.

Largest Lead Of The Game:

The Under is getting hammered here, for good reason. The two teams are remarkably evenly matched, and even though that tends to be borne out through runs and mid-size leads, an Over/Under line of 17.5 is especially generous to Under bettors.

The basic truth of this series is that the Celtics and the Heat are evenly matched teams, but the Heat have dominated crunch time minutes.