Skip to content
USA Online Sportsbooks | Sports Betting | Does Tua Have A Shot At NFL’s Rookie Of The Year? 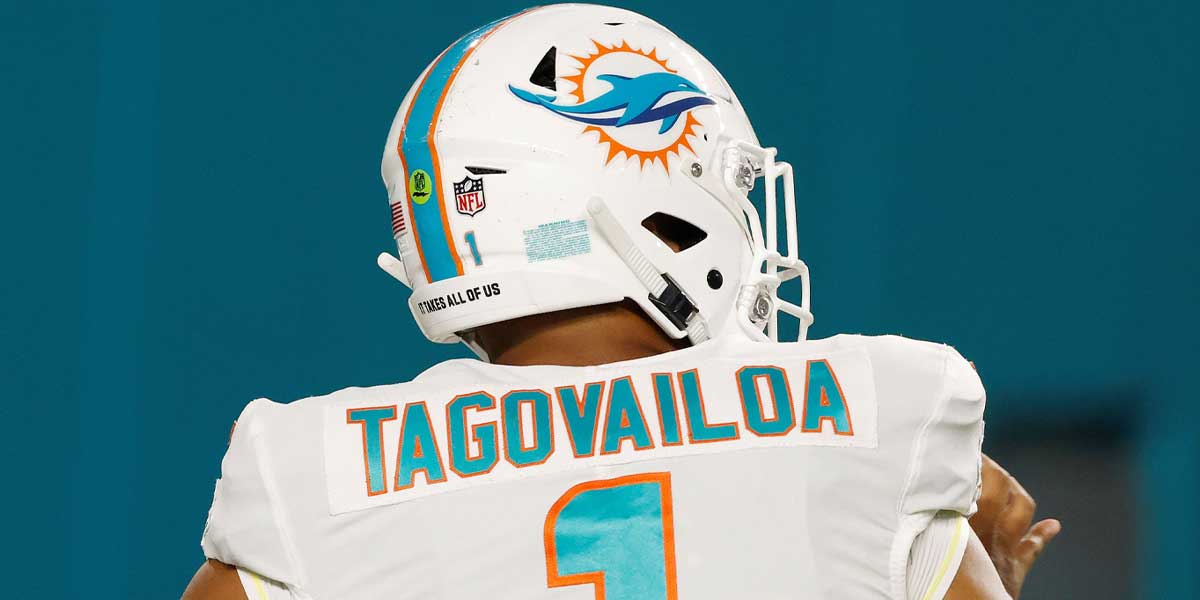 CORAL GABLES, Fla. - Some like to say that if a change is inevitable, it might as well come sooner rather than later.

After a news release from the camp of the Miami Dolphins, it appears Dolphins’ head coach Brain Flores is one of those people. The Dolphins made the announcement Wednesday that rookie Tua Tagovailoa will become the starting quarterback going forward, replacing veteran Ryan Fitzpatrick.

Coach Flores has announced that @Tua will be the starting quarterback. #FinsUp pic.twitter.com/kxVqpwZPLY

Tua made his career debut in the Dolphins dominant win over the New York Jets last Sunday. With the game well in hand, Tua took over the offense with around two minutes to go in the fourth quarter and completed one pass, also handing the ball off a few times.

Apparently, that was enough for Flores to make the call to replace Fitzpatrick with Tagovailoa going forward.

The news came as a shock to NFL bettors and fans alike, as Fitzpatrick had, by all means, exceeded expectations so far in 2020. Fitzmagic was in full effect as the journeyman had led Miami to a 3-3 record and a place above the New England Patriots in the AFC East standings.

Fitzpatrick has thrown for over 300 yards in half the Dolphins’ games this year, with a total of 10 touchdown passes against seven interceptions.

Now, fans in Miami will get an accelerated look into their future as the young Hawaiian takes the reigns of the offense.

If Tagovailoa is able to play at the peak of his potential, he would easily take the league and media by storm. So much so, that is isn’t farfetched to consider Tua’s shot at winning offensive rookie of the year.

Current odds have Justin Herbert and Joe Burrow in a comfortable lead for the award via the major online sportsbooks.

Offensive Rookie Of The Year

Tua would have to lead the Dolphins into the playoff race while putting up some gaudy numbers in order to gain some traction in the race for OROY. In order to do that, he will need to be the dynamic playmaker and accurate passer he was in college.

Tua’s ability has never been in question.

In just three years at Alabama (two as a starter), Tua threw for 7,442 yards, 82 touchdowns, and just 11 interceptions. Tua assembled these numbers while holding a 69.3 completion percentage and gaining 10.9 yards per passing attempt.

Tua won’t need much change to adapt to NFL defenses considering he faced some formidable teams during his time at Alabama, not to mention the insane defenders he went up against in practice every day. Throwing over nine interceptions seems unlikely.

Passing touchdowns are another question entirely, as Miami is pretty limited when it comes to downfield passing weapons. Hopefully, Tua will be able to turn a couple of these players into stars with his passing.

While the juice here leans towards Tua starting the remainder of the season, the biggest concern surrounding Tagovailoa remains his injury potential. Tua is less than one year removed from a devastating hip injury that ended his college career in 2019 and has also had multiple surgeries on his ankles.

By making this decision, the Dolphins clearly feel that Tua is ready to play and that he gives the team the best chance to win going forward. But for the immediate future, the main focus for the Dolphins should be on getting their franchise quarterback settled into his new role while doing everything humanly possible to keep him from getting hit.