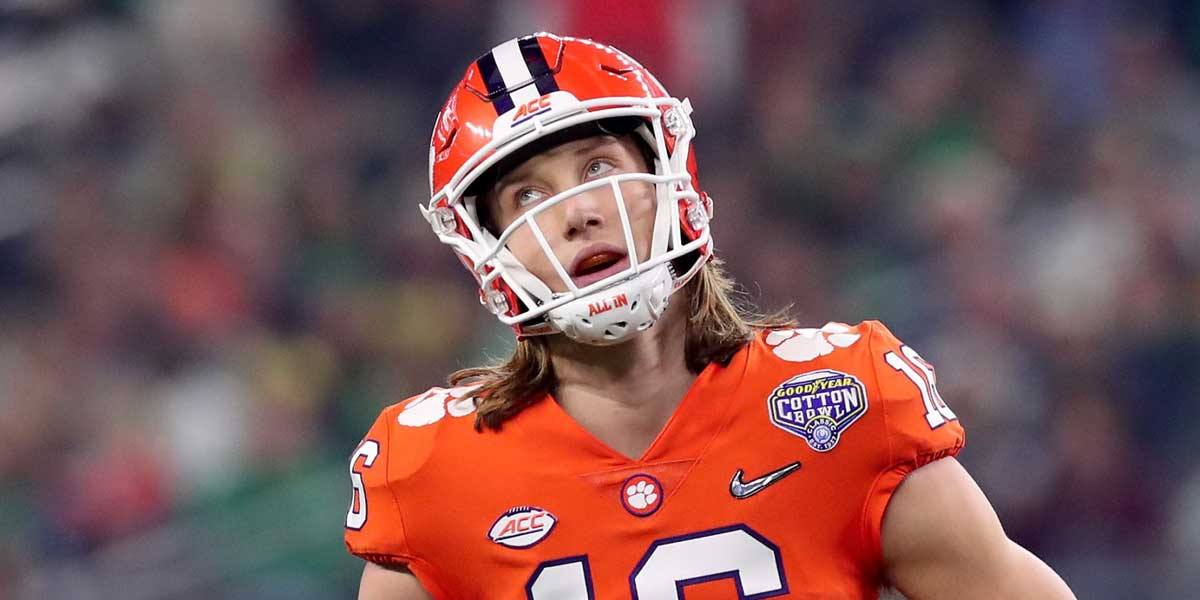 CLEMSON, S.C. – Even though an NCAA Champion will be crowned next Monday, sportsbooks have wasted no time in releasing odds on who may win the 2020 Heisman Trophy award.

Placing a bet on the 2020 Heisman Trophy odds right now would be smart because the odds for some of these players might not be as profitable later on as they are right now. We’ve got the early Heisman Trophy odds from online sportsbooks along with an early-season outlook for each candidate.

Trevor Lawrence is the only player on this list that still has one more game left to play, and that game could very well cause his odds to become shorter or longer depending on his performance.

Either way, the Heisman Trophy will be Lawrence’s for the taking as he’s the early favorite with +225 odds. Even after the College Football Playoff Championship game, Clemson is expected to be among one of the best teams in the nation.

Although Lawrence started the season a little bit slowly, he still threw for 3,431 yards, 36 touchdowns, and only eight interceptions with one game remaining. The biggest difference between Lawrence’s freshman year to sophomore year is how he used his legs. This season he set a career-high in rushing yards (514) and rushing touchdowns (8) which he can only be expected to improve upon going into his Junior year.

He’ll be leading the Heisman race and the award might be his to lose going into 2020.

Justin Fields is the biggest threat to Trevor Lawrence’s Heisman Trophy hopes. Fields actually had a similar statistical season to Trevor Lawrence in 2019. The sophomore finished the season with 3,273 yards, 41 touchdowns, and three interceptions.

He also showed growth as a runner as he set a career-high in rushing yards (484) and rushing touchdowns (10). Fields posted these numbers in his first full season as a starter for the Buckeyes and he can only be expected to improve in his second season.

If Fields can remain healthy next season and improve this offseason, he should be able to boost his numbers and could possibly even eclipse Lawrence for the Heisman Trophy. With Fields having +250 odds the 2020 Heisman Trophy race seems like it will be between Trevor Lawrence and Fields.

This more than likely won’t be the only trophy Fields and Lawrence will have to battle for because Clemson and Ohio State may very well be back in the College Football Playoff in 2020.

Kedon Slovis is the youngest player on this list and he showed a lot of promise as a freshman quarterback tasked with turning around the USC Trojans football program. Slovis was paramount in turning a 5-7 team to an 8-5 team all while keeping the Trojans competitive in most of their games against opponents ranked in the top 25.

If USC can recruit and build around Slovis they’ll easily be able to take control of the Pac-12. Slovis finished the season with 3,502 passing yards, 30 touchdowns, and nine interceptions while completing 71.9% of his passes. Slovis can make a real Heisman push in 2020 if the Trojans get off to an undefeated start.

With +400 odds Slovis is a darkhorse candidate to win the Heisman and he’ll have to dominate the Pac-12 to garner the attention of Heisman voters. College football bettors should not forget this name.

Mac Jones took over under center for an injured Tua Tagovailoa, and although he had some big shoes to fill, the sophomore quarterback gave Alabama fans something to look forward to next year.

In his first-time seeing action in his college career, Jones played well while leading the Tide with 1,503 passing yards, 14 touchdowns, and three interceptions.

Jones will have a lot to prove in this upcoming season. But, as the quarterback for Alabama in the SEC, he has the best chance of anyone outside of Fields or Lawrence to win the Heisman. This is especially if Alabama can take down LSU next year.

His +500 odds are definitely a great value bet right now and heading into next season the Crimson Tide will still have a plethora of talent on both offensive and defensive sides of the ball to remain a contender for the College Football Playoff.

Alabama’s success will be directly correlated with how Jones develops and that is the perfect opportunity for Heisman success.