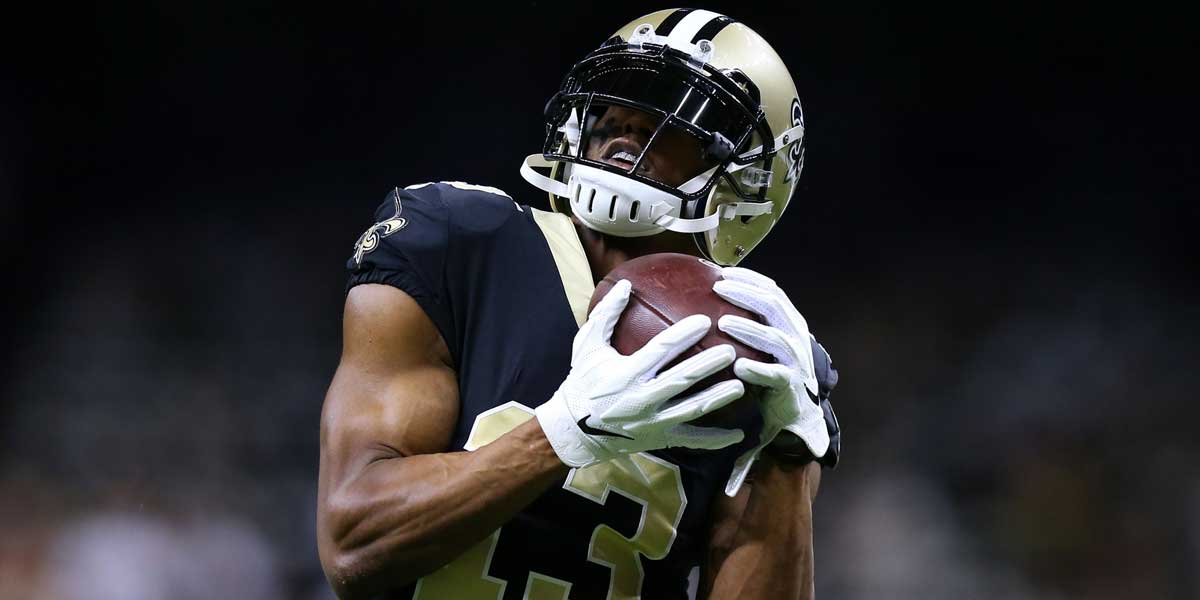 When looking at the wide receiver position, there are tons of options available being that there is endless amounts of talent at the position. With there being that much talent in the league at the position, picking and choosing between favorites, sleepers and busts could be difficult.

The favorites are usually the ones that offer the most talent at the wide receiver positions and should be rostered in all fantasy football leagues.

The sleepers are the ones that fly under the radar and get drafted late and end up helping a team the most while busts could hurt a team very much if drafted high.

With there being endless amounts of talent at the wideout position, there are just a few players that pull themselves ahead of the rest as the elites.

Looking at Michael Thomas, he could not be in a more perfect situation than he is right now. He is catching football from arguably one of the top quarterbacks in the league in Drew Brees and it shows as he has improved in every category, every single season that he has been with the New Orleans Saints.

Thomas will certainly continue as the top wide receiver both in the league and in fantasy football.

Shortly behind Thomas is the newest member of the Arizona Cardinals, DeAndre Hopkins, who is clearly a top-three receiver in the league.

Some could argue that he is not catching from DeShaun Watson anymore but face it, no matter who is under center, Hopkins will show out. There should be no questions asked that if still on the board, this is a must-have receiver.

At this point in his career, age is just a number to Julio Jones as year in and year out, he proves that he is not to be messed with.

He is a bonified stud both on the field and on any fantasy team. He leads the Atlanta Falcons each week in targets, reception and yards and will continue to do so until age decides to catch up with him.

Being that there are endless amounts of talent at the receiver position, there is bound to be sleepers in any round of a fantasy football draft.

A.J. Brown had a very solid yet under the radar rookie season as there was not much of a spotlight on him. He put up 1,051 yards and eight touchdowns in 2019 which was good enough for 217.1 fantasy points.

He could potentially overtake his projection now being that he is the clear cut WR1 for the Tennessee Titans as he fits their fast-paced receiver game very well.

Also coming off of his rookie season, Terry McLaurin put up a solid 919 yards to go along with seven touchdowns which was good for 191.9 points.

McLaurin is the WR1 without a doubt so fantasy GM’s can expect him to go over his projection on online betting sites. Something else to take note of is that it is clear that Dwayne Haskins looks McLaurin’s way very often as they have built chemistry when playing together at Ohio State.

Another incoming sophomore to take a look at is D.K. Metcalf. Metcalf took the league by storm as he put up 187.1 points after going for 900 yards and seven touchdowns.

It also helps that he is catching footballs from Russell Wilson who is at the top of his game right now. Metcalf could very well take over the WR1 spot in Seattle mid-season if he continues his stardom.

Sticking with the sophomore theme, there is no sophomore wide receiver with higher expectations than Marquise “Hollywood” Brown.

Brown is constantly under a microscope being that he is not only on the Baltimore Ravens but also that he is related to former receiver Antonio Brown. It is also known that Brown will more than likely receive a larger role in the upcoming season being that Lamar Jackson loves throwing his way when he lines up on the field.

These players could make or break a fantasy football roster if they are drafted too high as there are expectations that they won’t live up to their projections.

Michael Gallup had a bit of a breakout year in the 2019 season and unfortunately, with the Dallas Cowboys offseason, it looks like he will be on his way down.

Gallup was the WR2 option behind Amari Cooper but that could likely change as they drafted CeeDee Lamb in the first round who is bound to take away targets from Gallup.

Not to take anything away from Tyler Boyd and the season that he had last year with the absence of A.J. Green, but now that Green is back, it is time for Boyd to take a backseat from the WR1 spot.

Also, with a rookie quarterback in Joe Burrow under center for the Bengals, that could hurt Boyd’s value being that he has not yet built the chemistry with his new quarterback.

At best, Boyd could be seen as a back-end flex option.

Before drafting Stefon Diggs too early, fantasy owners should know that the Buffalo Bills are known as a more run-heavy team.

Also, Josh Allen has shown spurts of greatness here and there, but he is not yet proven to be a consistent passer in the NFL. That being said, Diggs will have a lot on his plate as he is no doubt going to be the top receiving option but it all depends on the play of Josh Allen and how many times they throw the ball.

There are some who would argue (most likely Jets fans) that Perriman is poised for a breakout season.

There is no doubt that the potential is there for him to have a breakout, but, the one thing to take note of here is that this is still the New York Jets and that there are not many bright spots to look forward to on this team.

Unless Sam Darnold is ready for a breakthrough season, Perriman is not worth the risk here even as a flex option.