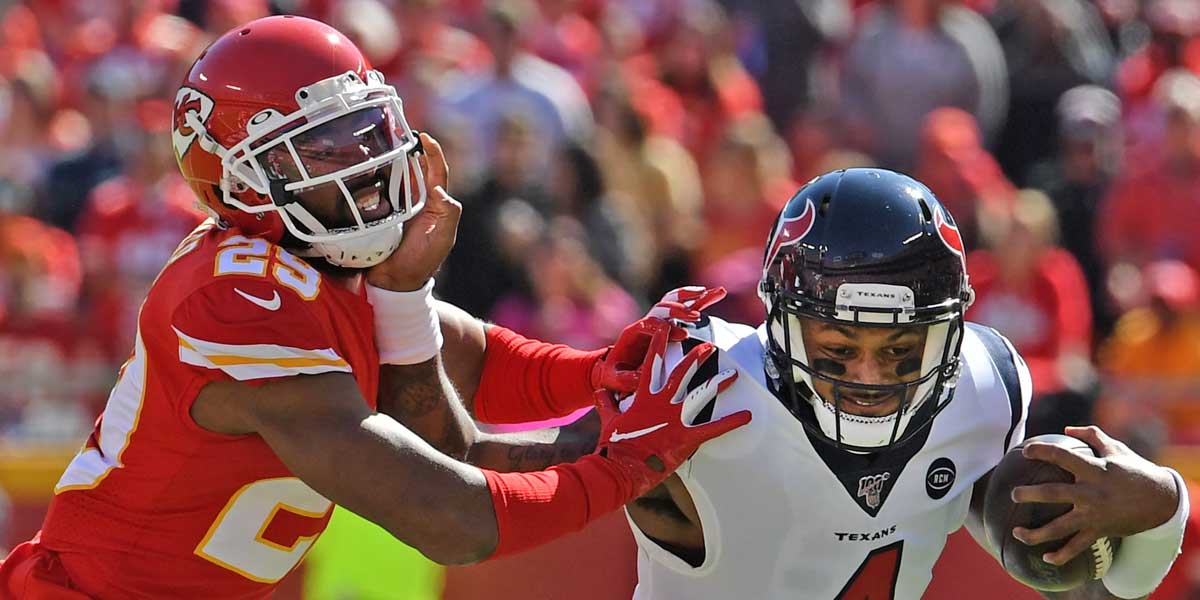 KANSAS CITY, Mo. – While betting on the Houston Texans and Kansas City Chiefs game, many bettors will only scratch the surface regarding the number of bets available on NFL games.

Sure, one could bet the game spread (which favors KC by 9.5), the over-under (which is set at 51.5 points), or the moneyline (which has Kansas City at -440 and Houston at +320). However, oddsmakers at offshore betting sites offer plenty of other options for NFL bettors to take on.

With this, let's review five bets in the Chiefs and Texans game that may be easier to guess than the actual gameplay.

The over-under for this 3:05 p.m. EST matchup on Sunday may be the highest of the four divisional games, but bettors should be weary taking the over. This is because the Texans’ offense has been struggling as of late.

On the season, the Texans are one of the slowest teams to get started, averaging only 2.8 points after the first quarter. This is ranked only ahead of the Chicago Bears and the Washington Redskins.

Add in the fact that the Chiefs have been holding opponents to 11.5 points per game since Week 11 and this seems like a very safe play. Additionally, they have held their opponents under 18 points in all but one of those six games.

While the Texans aren’t projected to score quickly, the Chiefs, on the other hand, are. Between their league’s seventh-best 5.6 points per 1st quarter and league-leading 11.1 2nd quarter points per game, the Chiefs could very easily blow this game wide open.

As injury concerns no longer plague this team, scoring over two touchdowns should come at ease for the Chiefs.

In the same six-week timespan mentioned above, the Chiefs are averaging over 26 points per game. Over the last four games, the Chiefs have recorded 15 points or more in the first half in three of their last four games and should be an easy cover again on Sunday.

While this NFL wager comes less from factual statistics and past trends, it still gives bettors a great opportunity to exploit the offerings from online betting sites. A touchdown (-200) to be scored first is the strong favorite here, but just playing the odds may be the better route to take.

Seeing a field goal or a safety become the first points scored in the game is welcomed with odds of +150. While this is worth it just from the underdog mentality, bettors may also have the ability to hedge this wager during live betting action.

0-1 Total Turnovers In The Game

This is yet another wager to bet on that focuses more on the odds offered than previous statistics. Sitting at +400, bettors can quadruple their risk should both teams turn the ball over less than two times.

Despite both teams liking to air out the ball, look for the play calls to be rather conservative and more punts or fourth-down stops to be the cause of the ball changing possessions. For those who want to lay two risks on this prop bet, they can also submit a wager for 2-3 total turnovers, which sits just above EVEN (+120).

Both of these coaches are rather aggressive in their play calling, never shying away from going for it on fourth down. With this, look for the Chiefs to avoid kicking field goals when they are on the Texans’ side of the 50. Andy Reid looks for touchdowns, meaning the longest field goal from them shouldn’t be over 35-40 yards.

While Bill O’Brien and the Texans have a similar mindset, they may be more inclined to get points on the board by any means necessary. With this, any field goal of 45-60 yards will likely be attempted by the Texans, weather pending.

These are only some of the few-hundred wagers offered on this NFL playoff game. No matter how one looks at this upcoming game, know that bets are able to be taken before kickoff as well as during live action.