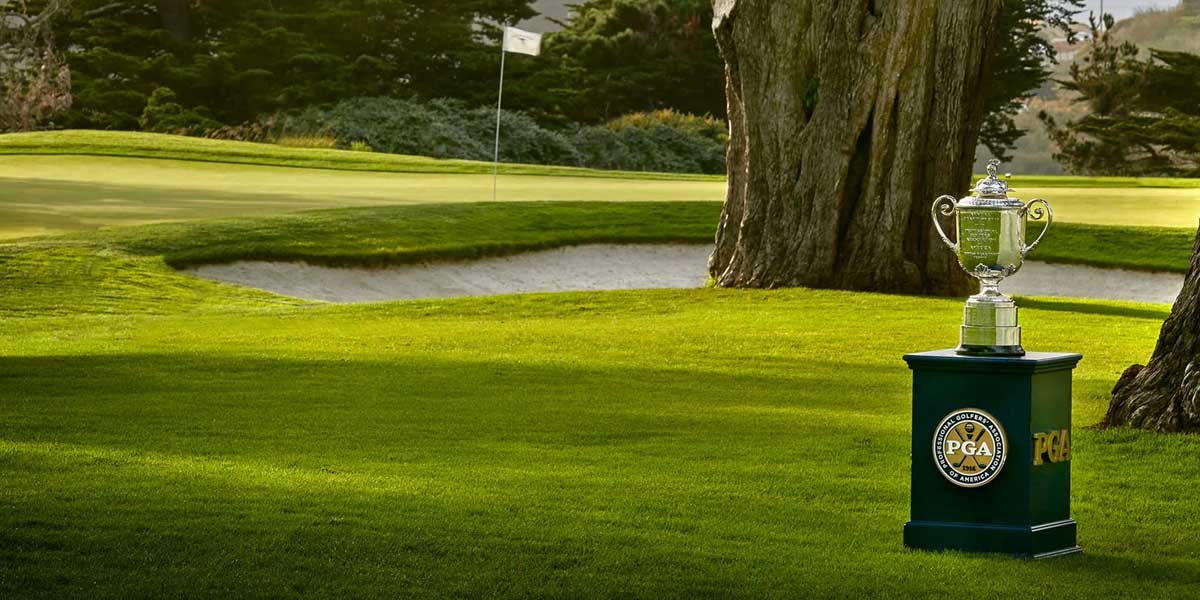 SAN FRANCISCO, Calif. - The golf universe revolves around the Bay Area this weekend as the world’s best golfers head west for the PGA Championship. TPC Harding Park is the destination for this year’s event, where Brooks Koepka will look to three-peat as the tournament winner.

Golf bettors are hastily putting together their plays for the tournament, which is the first major championship on the PGA Tour in over a year.

Prop bets are always an important component to any major championship betslip, with books offering a wide variety of odds and lines for the event. Here are 9 of the best prop bets found on some of the most popular online sportsbooks.

Major championships in golf always attract bettors back to the sport who might have not watched some of the smaller events throughout the year. For those who aren’t already aware of golf’s newest young star, meet Colin Morikawa (+325).

The 23-year-old scored a huge win at the Workday Charity Open a few weeks back when he defeated Justin Thomas in a three-hole playoff behind some spectacular putting.

This putt is just too casual for Morikawa pic.twitter.com/uwy8wOZGSV

He also finished in second at the Charles Schwab Challenge, the first event back from the hiatus.

Morikawa is a graduate of the University of California in Berkley and played this course over a dozen times as a member of their golf team. This will be a massive advantage against the field since the last PGA Tour event at this course was over five years ago.

Xander Schauffele (+185) came out from the break playing very solid golf in leu to a T3 finish in the first event back at Colonial. Since then, he has rattled off four T20 finishes in a row including a T6 last week at the St. Jude invitational.

Xander’s approach game has been shaky at times, but his putting and length off the tee will be able to prop up any minor mistakes.

Young Viktor Hovland (+400) is another name that has shown major growth since the sport took a short break.

The 22-year-old Norwegian has five top 25 finishes in seven events since the return and is third on the tour this season in eagles with 12.

Hovland’s biggest weakness is his putting, but seeing him at +400 for a top ten finish is tremendous value due to his terrific iron play.

Daniel Berger (+150) was the first winner on tour after the break and has finished in the top five in five of his last six tournaments.

Berger, a former teammate of Colin Morikawa, has experience on this course and will look to solidify his name amongst the big boys in the first major of 2020.

Berger is fifth in scoring average this season and sixth in birdie average. Even in a stacked field, getting Berger at plus money T20 is one that golf betting squares shouldn’t have to think too hard about.

Despite some epic Sunday round collapses, Tony Finau (+175) has been playing very good golf over the last few weeks.

While it would be tough to expect Finau to win his first major after seeing some mental errors in recent final rounds, a top 20 finish at positive value is one of the best bets available.

Finau has a history of finishing high at majors and could be hanging around once again.

Abraham Ancer (+225) – another appearance by a young golfer who has played above his means since the break. Who would have guessed?

Ancer has shot some of the lowest rounds in the tournament and ranks high for par 3, and par 4 scoring average.

The Mexican golfer proved he can hang with the best after scoring T20 finishes at St. Jude, Travelers, RBC Heritage, and the Charles Schwab Challenge all within the last two months.

Tyrell Hatton is one of the golfers to watch this weekend overall, but online sportsbooks are also offering him as the top Englishman at +400.

Matthew Fitzpatrick and Justin Rose have looked very weak in the last few tournaments, while Tommy Fleetwood is still only in his second event since the hiatus.

Meanwhile, Hatton has scored two top-four finishes in his three events since the postponement.

If they are willing to put up the cash, Rory McIlroy could be as close of a lock as any bet available.

Shane Lowry is the only real competition to McIlroy, and while he did score a T6 finish last week at St. Jude, McIlroy is far and away the better performer.

PGA Championship – Tiger Woods to Make or Miss the Cut:

Look, nobody wants to root against Tiger Woods at this stage of his career. It is only natural.

While it would be great to see Tiger break the wins record, the fact remains that he is only playing in his second tournament in the last five months.

While Woods did make the cut at the Memorial (barely), he was playing on an extremely familiar course.

Woods walked gingerly from tee to tee in the final rounds at Muirfield Village that weekend, with pain from his fused back noticeably bothering him.

The obvious argument here is Tiger’s win at the Masters last year, which was seemingly fueled by pure magic and willpower alone.

But at +225, the value of this PGA Championship prop is unfortunately against the Big Cat.