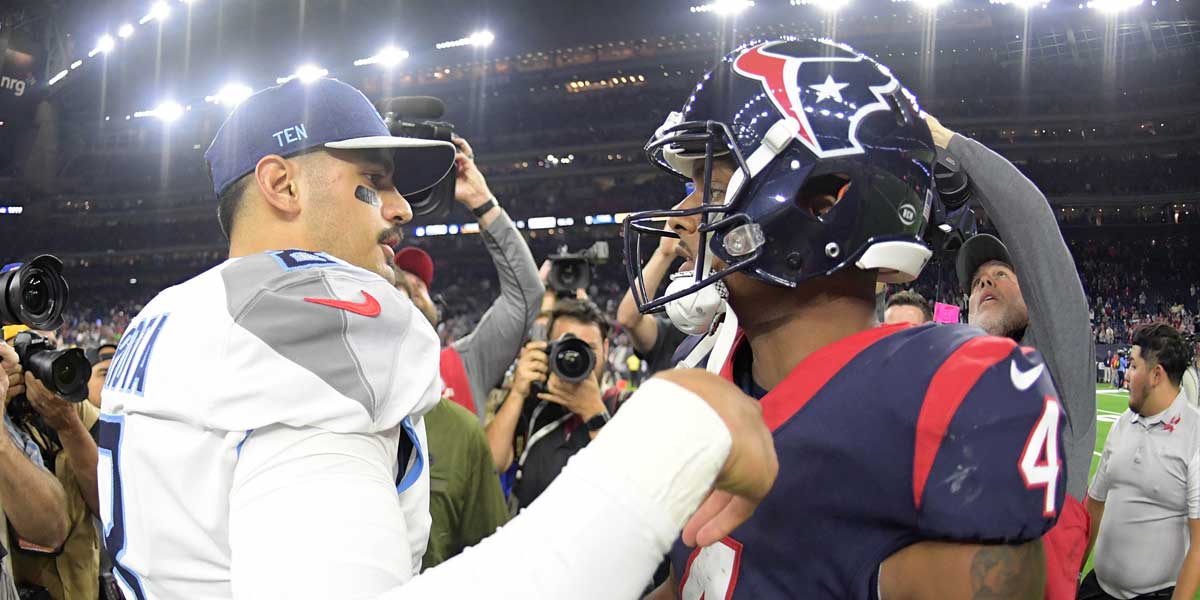 Tallahassee, Fla. – There is no division in the NFL with more parity this season than the AFC South.

Since 2010, the Houston Texans have won the division the most division titles (5) followed by the Indianapolis Colts (3) and the Jacksonville Jaguars (1). While it has been 11 years since the Tennessee Titans won their last title, they have finished with a 9-7 record four times in that span.

However, the Titans have been on the hump and make an excellent betting opportunity for those with faith in head coach Mike Vrabel and quarterback Marcus Mariota. Since Mariota has arrived in Tennessee, they have finished with 3-straight 9-7 records, and once made the playoffs (where they beat the Kansas City Chiefs but lost to the New England Patriots).

With the addition 2nd round draft pick, A.J. Brown, Mariota will be given a target who is a proven athlete. Brown comes out of the University of Mississippi, which is his hometown, and was named on the first-team All-SEC team in the previous two years.

As the only athlete other than Kyler Murray to play in both the Under Armour All-America Football and Baseball Game, expect Brown to give the Titans a major boost in both receiving statistics and wins.

Odds To Make Playoffs, per Bovada

The AFC South has only sent three wild-card qualifiers to the playoffs over the course of the last ten seasons, so deciding the division winner is paramount in deciding who makes the playoffs. All eyes are focused on the Indianapolis Colts, who lost the division last year to the Texans but got the best of them by winning in the playoffs 21-7.

The defense has been steadily improving over the last few seasons, especially with the addition of 2nd year OLB, Darius Leonard. Leonard accumulated 163 tackles in his first season, including seven sacks, four forced fumbles, two fumble recoveries, and two interceptions. He will be the leader of this Colts defense, being named to the first-team All-Pro team, leading the league in tackles, and being named the NFL Defensive Rookie of the Year all before his 24th birthday.

With a healthy Andrew Luck, who posted his highest completions, attempts, completion percentage, and quarterback rating, there is nothing this team can’t get done. Making the playoffs is only the beginning of their goal and with that mindset, bettors should be willing to throw down money on the odds presented.

Because anyone can take this division, the win totals are eerily similar as well. The division winner has averaged 10 wins over the last five seasons, while the 4th place finishers have accumulated a total of 17 wins in that time span. The 3rd place finisher has had records ranging from 9-7 (Titans, 2018) to as low as 3-13 (Jaguars, 2014).

With this, it is difficult to confidently select a win total. The Colts haven’t won 10 games or more but once in the last four seasons; however, selecting the under seems too risky. Removing the Jaguars’ 2017 division-winning 10-win team, they have accounted for 3.67 wins per season since 2012; however, with a defense as stout as theirs, wins can come in bunches.

Instead, the focus should turn to the Texans, who have won 9 or more games in four of the last five seasons, including taking three division titles in that time span. A bet on the over is even money and with raw offensive talent, they should be able to accomplish this feat.

Additionally, USAOnlineSportsbooks.com knows there is value to be had with the Titans. Oddsmakers don’t know how to gauge this team, leaving the odds standard across both the over and under. Mariota has won 9 or more games in every year he has been in the league, so this seems like a wager worth taking – even if it results in a push at the end of the year.