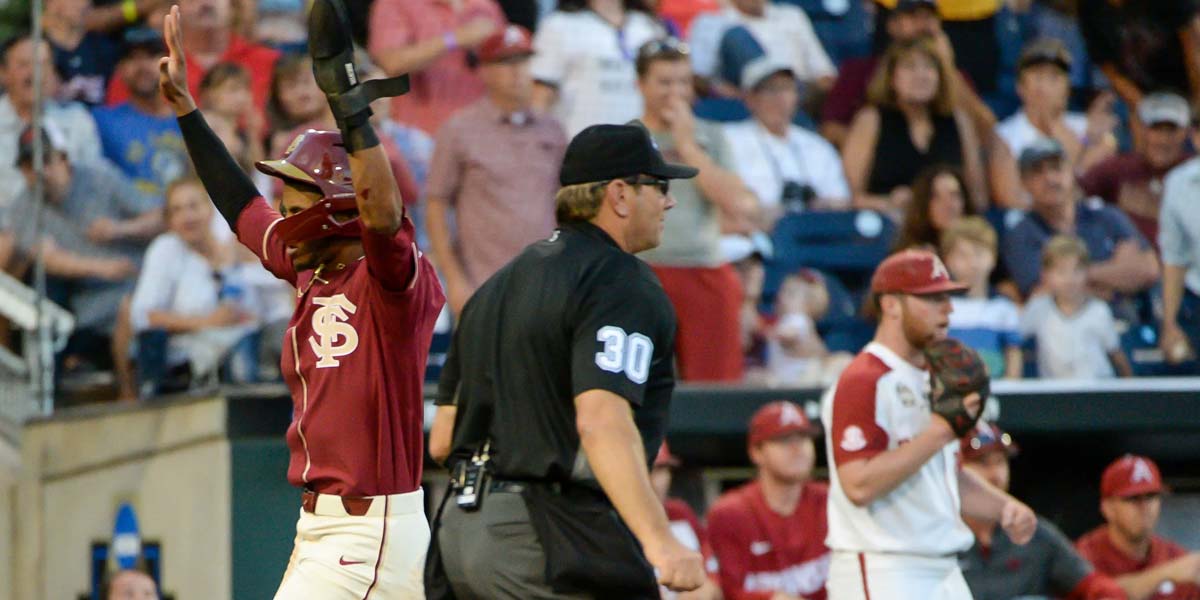 OMAHA – The Florida State Seminoles are on fire. Pitcher Drew Parrish showed exactly what dreams are made up when he pitched one of the best games of his life. Parrish has had a season of hot and cold games but on Saturday night he showed the world what he is truly made of. No one expected the ‘Noles to be in this tournament, let alone perform as well as they did against Arkansas.

“We’ve got something going on,” third baseman Drew Mendoza told reporters after the game. “I don’t know what it is.”

Although Parrish doesn’t want to make the game all about him, it really was and his teammates agree. Many of them said they didn’t even need to be on the field with Parrish on the mound. As for the pitcher himself, he voiced his happiness to the press in a post-game interview.

“It was the best feeling in the world, honestly, twenty-six thousand fans out there watching the game, plus TV and competing against one of the best teams in the tournament. It’s a great team win,” he said.

The game seemed like a bout between two pitchers, not two teams. Each side played their best, having zero points on the board by the ninth inning. In the end, it was the Seminoles continued pressure on the Razorbacks that led them to a 1-0 victory.

FSU will go head to head with Michigan in the winner’s bracket on Monday. It will be another game where the pitchers will determine the outcome. The Wolverines, like the Seminoles, didn’t expect to be in the position they’re in. They are just as grateful and hungry to show the world what they’re made of so this matchup could be a clash of the titans style game.

"I think at this point in the year every team that's playing against us is really good, so we can't allow them to have free bases," said University of Michigan infielder Blake Nelson during a pre-game interview.

C.J. Van Eyk, a right-handed pitcher for FSU will be pitching on Monday. He holds a 3.80 ERA and a record of 10-3. The Wolverines will have Tommy Henry, a left-handed pitcher as their starter. He has a 3.54 ERA and a 10-5 record. The Seminoles coach Mike Martin sees Michigan as a formidable opponent.

USAOnlineSportsbooks.com knows this will be an exciting game to watch. If the Seminoles win it, they will be that much closer to giving their coach Mike Martin one heck of a send-off, as this is his final year coaching the ‘Noles. Florida State is the favorite to win with odds of -185 while Michigan has +150 odds going into Monday night’s game. The game will be televised on the ESPN network and starts at 7 pm ET.