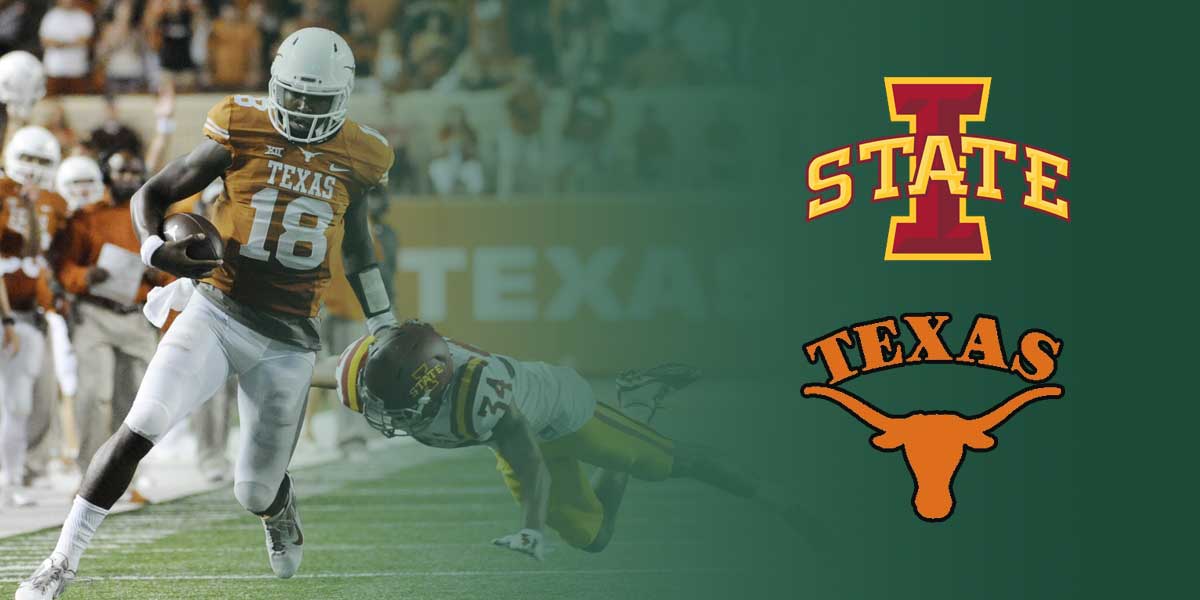 AMES, Iowa – College football Friday is bringing with it some key matchups. Sports bettors are putting heavy action on games with some longshot odds being heavily appealing.

Sports bettors will be able to wager on the Iowa State Cyclones vs. the Texas Longhorns, the Notre Dame Fighting Irish vs. the North Carolina Tar Heels, and the Oregon Ducks vs. the Oregon State Beavers.

There will be no shortage of college football betting this weekend with all these major conference faceoffs.

This is the perfect betting line for longshot sports bettors. The Iowa State Cyclones +100 should be very appealing since Iowa state is actually ranked higher than Texas. The Cyclones are ranked 15th in the country while the Longhorns are ranked 20th.

While they are both top 20 teams, Iowa has been stronger so far this season, having a solid 6-2 record to the Longhorns 5-2 record.

With the Longhorns being favored by only 1.5 points, sports bettors who want to lean on the Longhorns would also want to take them to cover the spread.

Notre Dame is undefeated so far this season and are the number two ranked team in the nation. Their offense has been strong all year, and they have succeeded in outscoring even the best offenses, including their OT 47-40 win against the Clemson Tigers.

A saving grace for longshot bettors who want to take action on North Carolina would be the shakeup in the offensive line that Notre Dame is pushing forth.

Zeke Correll will be starting in what has already been viewed as the best offensive line in the nation. With this change, there is a chance that the solid foundation the team has already formed could suffer from this move.

“Lose a couple of really good players and we plug them in with two equally fine players,” said  Notre Dame coach Brian Kelly. “And we’re excited about their opportunities.”

Correll will be making his first collegiate start, which could bring with it nerves, lack of experience, and conditioning problems that the North Carolina Tarheels could bring with their defensive line.

The fact that the teams are playing in Chapel Hill might also give the Tar Heels an advantage. But the trends say otherwise.

The Fighting Irish are coming into this game 5-0 ATS in their last five matchups when playing against a team with a winning record. Notre Dame is also 5-1 against the spread in their previous six road games and the road team is 4-0 ATS in all four times these teams have met.

The “Civil War” is slated to be the prime time game on Friday night, but the fight between these two teams has been anything but civil the past decade-plus.

The Oregon Ducks come into this matchup having won 11 of the last 12 matchups against the Oregon State Beavers including three straight. Even though the Ducks no longer have Justin Herbert at quarterback, picking them on the moneyline appears to be a safe bet.

The questions more so revolve around the spread and Over/Under for this game. When it comes to the Over/Under, the Over is 4-0 in the Ducks' last four games on the road. The Over is also 5-0 in Oregon’s last five games after a straight-up win.

Just for any more reason to take the Over, both teams are coming in with their previous two games hitting the Over. The Pac-12 is notorious for poor defensive play and that trend should continue on Friday.

For the spread, it may be tempting to take the Beavers seeing as how Oregon barely scraped by the UCLA Bruins just last week. However, the Ducks are 6-1 ATS following an ATS defeat. They are also 5-1 in their last 6 matchups when entering as the road favorite.

This matchup looks to be a complete sweep across the board for the Ducks. However, in 2020, online sportsbooks as well as everyone know that anything can happen.