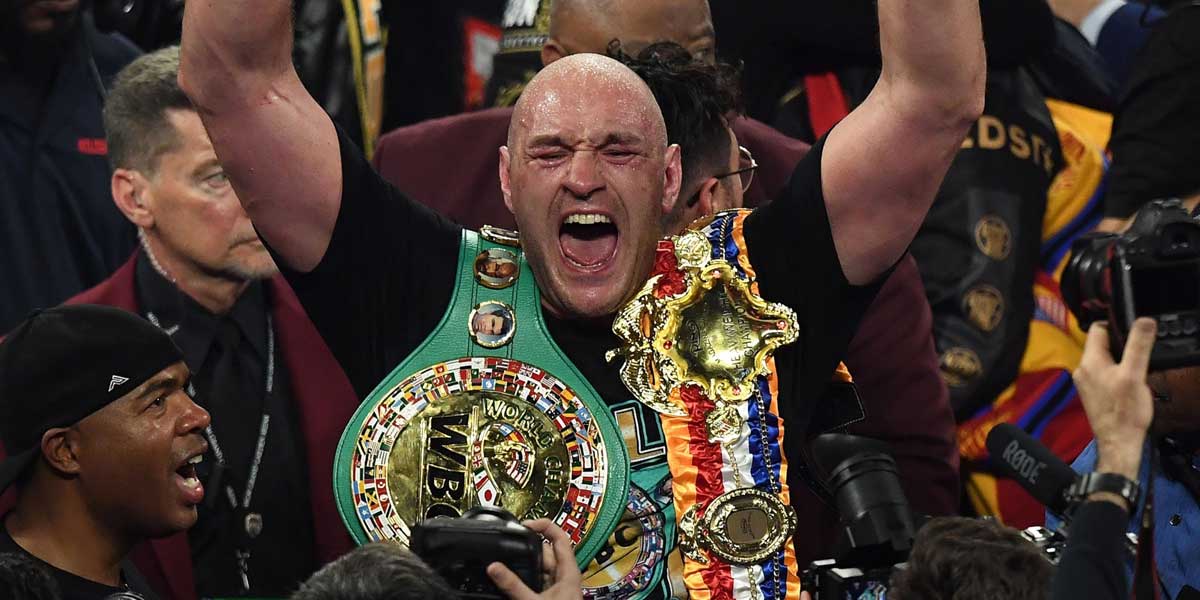 LAS VEGAS – The heavyweight division came one step closer to crowning the next undisputed heavyweight champion now that Tyson Fury earned the WBC heavyweight title from Deontay Wilder with a seventh-round TKO on in front of a sellout crowd at the MGM Grand Garden Arena in Vegas.

Wilder does have 30-days to trigger a rematch clause to get his belt back from Fury, but it remains to be seen if he will do so.

Now that Fury has beaten Wilder, he is the top heavyweight in the class and a unifying match with fellow British boxer Anthony Joshua should be on the horizon. Early odds for that fight have Tyson Fury listed as a -165 favorite at online sportsbooks over Anthony Joshua who has +135 underdog odds.

The fight is unlikely to happen this year as Joshua already has a fight setup against the Bulgarian Kubrat Pulev where he will put his title belts on the line.

If Wilder calls for a rematch with Fury the Joshua-Fury fight could be put on the back burner momentarily but could still happen towards the end of 2020 or early 2021.

Joshua-Fury’s mega-fight should happen sooner rather than later because the opportunity for a fight like this doesn’t present itself often. If Fury or Joshua were to lose a fight while waiting for their bout, the chance for an all British unifying match will have been squandered.

More than likely this fight will take place in early 2021 and hopefully, both boxers can keep their winning streak alive in the meantime.

In the sport of boxing, no fight is ever guaranteed no matter the circumstances. A prime example would be the first Anthony Joshua vs. Andy Ruiz Jr. fight. Ruiz was a +1200 underdog going into the fight and beat Joshua by knockout in the seventh round.

The two sides coming to an agreement about a fight is also easier said than done.

With both fighters being from the United Kingdom this should be one of the biggest boxing events in the country’s history which should give the fighters extra motivation to put aside any small issues that could derail the mega fight. Both boxers and those betting on boxing could profit greatly from this future bout.