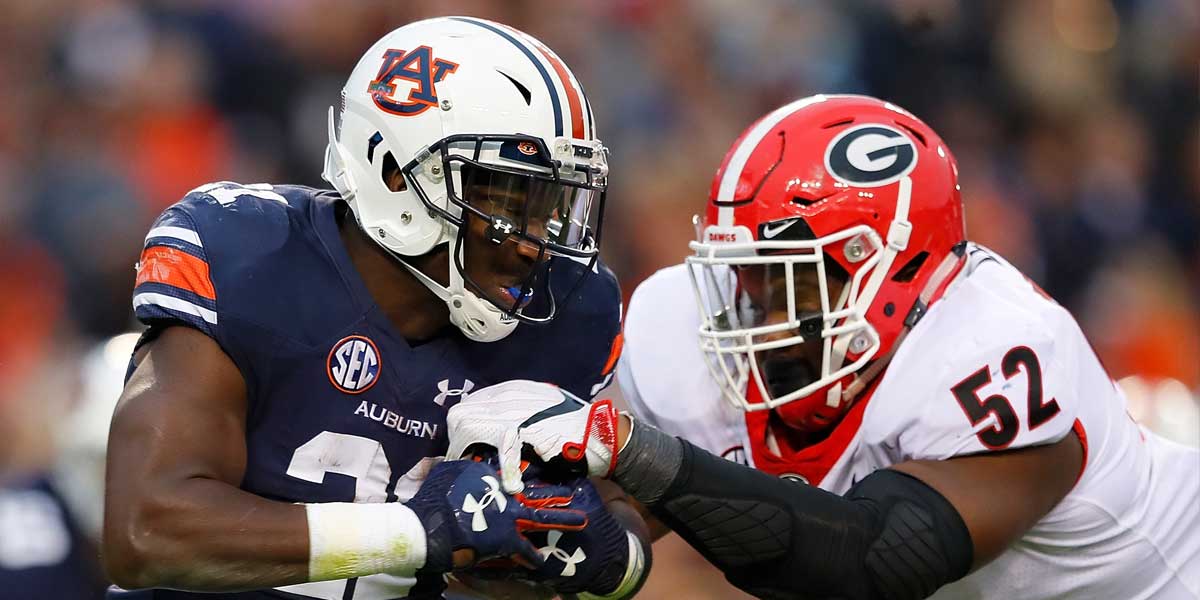 LAS VEGAS - The Georgia Bulldogs clash with the Auburn Tigers this Saturday, in a rivalry matchup that could shake up the SEC.

Georgia is coming off of a win against the Arkansas Razorbacks, although the 37-10 final score belies a truly awful first half in which Georgia scored only five points to Arkansas’ seven.

In the second half, however, they remembered that they were a top five team in the naiton and went on to score 32 points while Arkansas scored only 3 more.

Auburn, meanwhile, is coming off of a win against the Kentucky Wildcats which was expected but still needed for this young team.

Auburn's Sophomore QB Bo Nix is coming into his own and was on full display during the Kentucky game. Nix notched 233 air yards and three touchdowns.

Auburn is ranked seventh in the nation by the AP, while Georgia is ranked fourth, but Georgia is a significant favorite on the spread.

There’s a bit of shading towards the UGA side of the spread, interestingly. Despite their slow start at Arkansas, Georgia are serious favorites.

Part of this is because JT Daniels will be an option under center on Saturday, which he was not in the game against Arkansas.

A lot of the problems that Georgia had were due to D’Wan Mathis’ poor play, and he is not likely to see the field for this game.

Let’s take a look at some of the betting trends for this matchup, and see what they can tell us about wagering on this college football showdown.

Auburn is a team that has been underrated by sportsbooks in recent years. In their last 15 games, the Tigers are 11-4 against the spread.

They never seem to have all of the pieces together, but they manage to overcome adversity quite well.

Of course, they’re also known for losing winnable games, and to some degree, that tendency might be to blame when it comes to why their odds often underrate their quality.

Auburn is an unpredictable team, but with Bo Nix under center for his Sophomore season, and a track record of overperforming against the spread, they might be a good bet this time around.

Trend 2 - Betting The Under For Auburn

Auburn is a team that has generated a lot of weird outcomes, but this trend highlights one of the weirdest.

In the last 17 games the Tigers have played as an underdog, the Under is 13-4. In addition, in Auburn’s last five SEC games, the Under is 4-1.

They have a knack for making the game tough on favorites - just ask the Alabama Crimson Tide, who were upset by Auburn last year.

Trend 3 - Betting The Under For UGA

Auburn isn’t the only team that trends towards the Under in this matchup. UGA also has some seriously shocking trends with regards to the Under.

In their last seven games against teams with winning records, the Bulldogs have somehow generated seven hits for the Under.

That’s not all - in the Bulldogs’ last nine games as a favorite, the Under is 8-1.

Even when one expands the scope of the trend, it still holds up. The Under is 13-3-1 in Georgia’s last 17 games.

These are only some of the trends that college football bettors can take advantage of at online sportsbooks. Remember, however, that trends do not guarantee anything - they can be caused by anything from low sample size to variance.