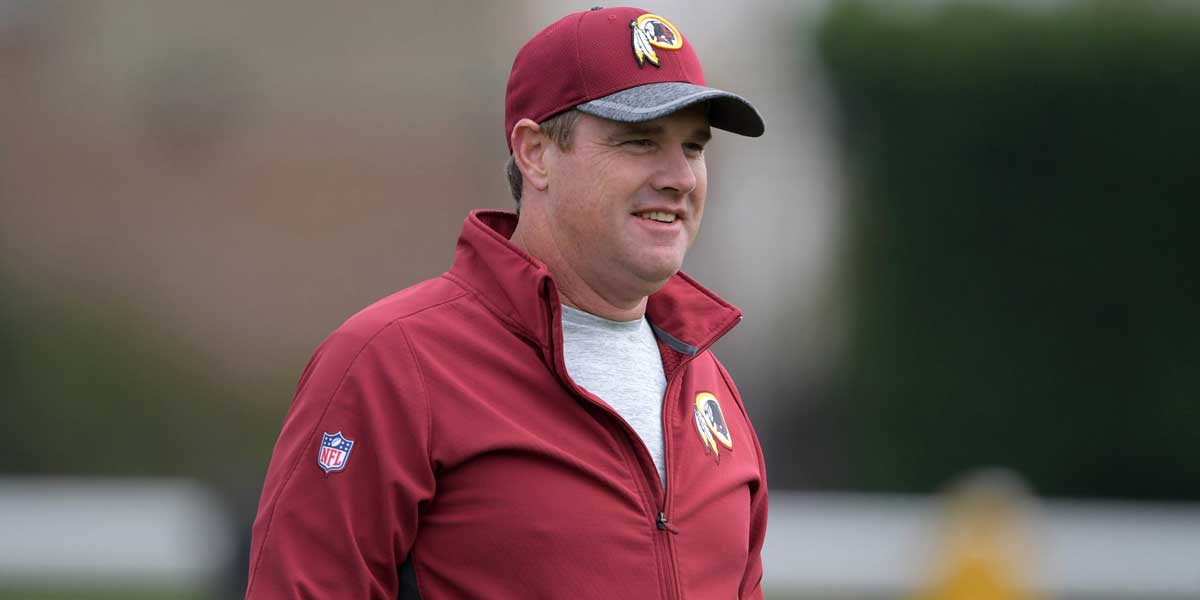 LANDOVER, Md. – The Washington Redskins gave head coach Jay Gruden a rude awakening at 5 a.m. this morning when they fired him. Gruden, 52, has been coaching the team since 2014, but after their loss to the New England Patriots on Sunday with a score of 33-7, it was clear that changes needed to be made. The Redskins now have a record of 0-5 and have odds of +25000 to win the NFC Conference, which puts them in last place on the odds boards.

Gruden’s first season with the team ended with a record of 4-12, but then they improved significantly in his second year going 9-7. It all went downhill from there. USA sportsbooks have the Redskins in a three-way tie with the New York Jets and the Miami Dolphins with odds of +100000 to win Super Bowl 54. After losing on Sunday, Gruden himself commented on whether he would still have a job this week.

Firing Gruden could’ve happened at any time this year as the team has been playing terribly. To fire him after playing the New England Patriots isn’t quite fair. The Patriots are undefeated, so every coach that has faced them this year has lost and managed to keep their jobs, including Miami Dolphins’ head coach Brian Flores.

Next week, Washington will be playing the Dolphins who are playing just as bad, if not worse, than the Redskins. When Washington beats Miami, it will seem like the losses were all on Gruden. The franchise could have fired him earlier on, or they could’ve waited to see if his team could beat the Dolphins next week with him as head coach. That would truly be saying something if he can’t beat the Fins because they are the worst team in the NFL, it’s a statistically numerical fact.

Everyone is putting the blame on Gruden for the team’s awful performance. Even players such as running back Adrian Peterson are passing the buck for their losses.

“It’s clear that something has to change," said Peterson. “That’s one thing you do know, because we are 0-5. We haven’t won. We haven’t been productive as an offense. You got to go back to the drawing board and say, ‘Okay, as a coaching staff...what can we do better to put our players in better position to be productive as an offense, to be better as a defense?’ It’s their job to do that. We 0-5. What we’ve been doing, obviously, isn’t working.”

The Redskins have all the hope that this change will help them succeed with a win. Until they actually look like they can play professional football on the field, their odds to move up in the ranks will not be changing very much. They’d have to win about every upcoming game to have even the tiniest of chances to advance because five losses are already five too many. For the NFC East division, they have the worst odds with +20000. At least the team has been consistent at coming in last everywhere you look.

The franchise issued a statement after Gruden’s firing:

"Through the first five games of the 2019 season, the team has clearly not performed up to expectations, and we all share in that responsibility. Moving forward we are committed to doing all that we can collectively as an organization to turn things around and give our Redskins fans and alumni a team they can be proud of in 2019 and beyond."