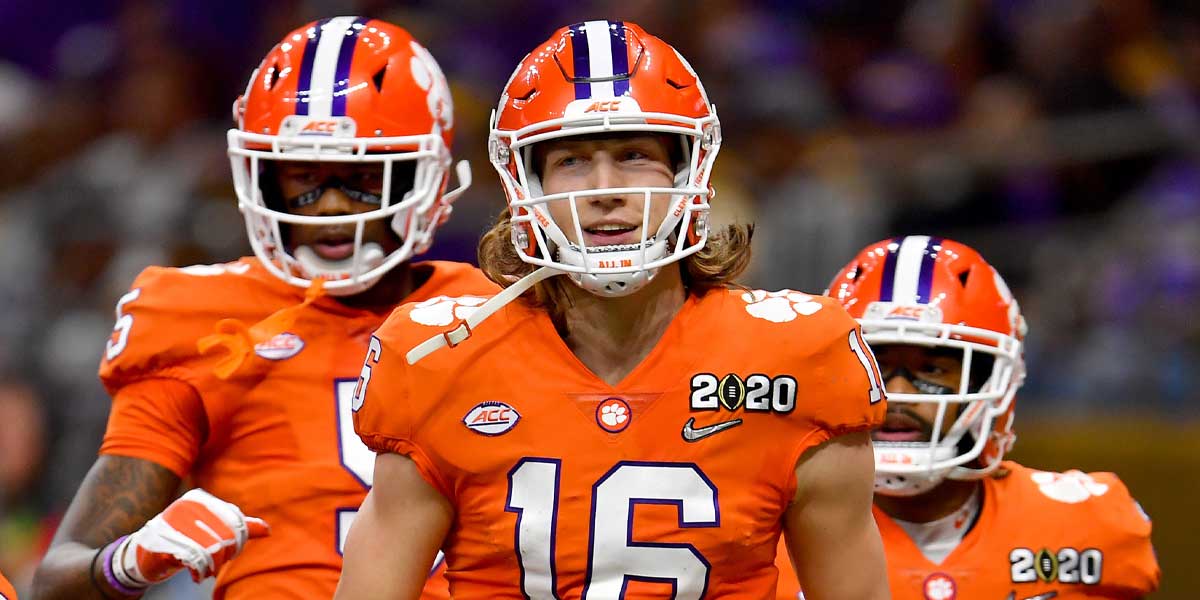 CLEMSON, S.C.—With the college football season now in full swing as the Big 10 conference has officially commenced, odds to win the College Football Playoff National Championship are now fully up to date.

Online sportsbooks have the Clemson Tigers as the favorite to win the National Championship as they are ranked No. 1 in the country.

Clemson has the favored college football odds for a reason as not only are they ranked the number one team in the country as mentioned before but they are undefeated and do not look to be losing any time soon.

Not to mention, they also have arguably the best quarterback in college football today in Trevor Lawrence who has already led them to two National Championships.

However, they will encounter a big test coming up when they face off against the Notre Dame Fighting Irish who are currently ranked fourth in the country. That game is currently scheduled for November 7. Should Clemson treat the Irish the same as all the rest of their opponents this season, look for their odds to get even shorter.

Following Clemson is the Ohio State Buckeyes who also has arguably one of the best quarterbacks in college football as well in Justin Fields. The reason for Ohio State not being favored is that they do not have as much National Championship experience as the last time they were even in the championship game was in 2015 when they won.

The Buckeyes looked great in their first game of the season as they put up 52 points. They also have the fifth-best recruiting class in the nation backing them up as well. That being said, this could be a great bet to make.

As the season progresses and there is more of a sample size to judge how good this team really is, look for oddsmakers to shrink these odds as well. Their next big test is against the No. 18 Penn State Nittany Lions this Saturday. However, if the Nittany Lions put on a performance like they did against the Indiana Hoosiers this past weekend, it shouldn’t prove to be much of a challenge for the Buckeyes.

Betting On The Crimson Tide

Third on the odds board is the Alabama Crimson Tide. Those that follow college football should know that the Crimson Tide should never be counted out, especially when Nick Saban is their head coach.

Alabama has remained perfect this season as well at a 5-0 record which is very difficult to come by in the SEC. They have taken down some notable opponents to start the season including the then-ranked No. 13 Texas A&M Aggies and also the then ranked No. 2 Georgia Bulldogs. That should be more than enough for college football bettors to lean towards the Tide.

Can Georgia Defy The Odds

Behind Alabama are the Georgia Bulldogs. Georgia did drop a game early on in the season to Alabama but that should not be discouraging as they have more games on their schedule that could bump them into the playoff picture including a matchup with the No. 10 Florida Gators.

They also have other big wins to back them up as well over the then-ranked No. 14 Tennessee Volunteers and the No. 6 Auburn Tigers. They have shown that they can clearly match up with anyone and would offer a great payout if they win the National Championship.

When looking for a longshot to take a risk on, the one team that should come to mind for any bettor is Notre Dame. The Fighting Irish are currently in the playoff picture as they are ranked number four in the country.

They have shown complete dominance in the ACC as they are a perfect 5-0 and have put up over 40 points on three separate occasions including a 52-0 win over South Florida. They will be put to the test as they faceoff with Clemson soon and if they pull off an upset, they will surely make their case for bettors to take the chance on them for a nice payout.