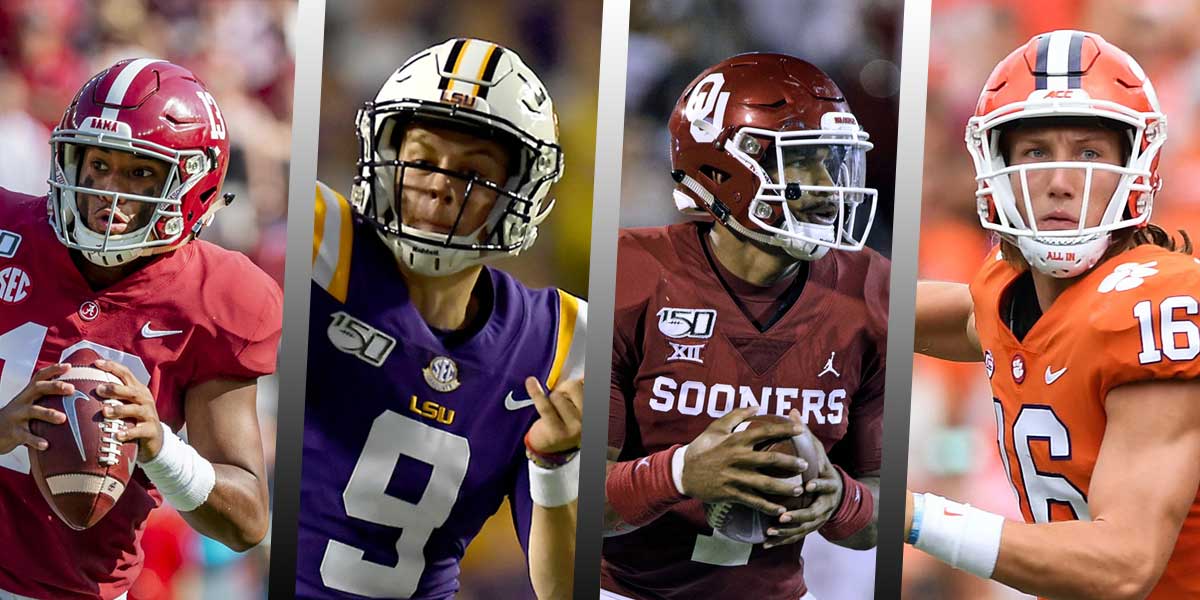 TALLAHASSEE, Fla. - The race for the 2019 Heisman trophy has started to take shape after seven weeks of college football action.

Alabama Crimson Tide quarterback Tua Tagovailoa is still leading the Heisman race with sportsbooks listing him at +115 to win his first Heisman trophy. Tua has been good this season, as he has led Alabama to an undefeated record and has amassed a stat line of 2,011 passing yards, 27 touchdowns, and one interception. His 96.1 QBR also leads the nation, which makes it easy to see why Tagovailoa has had a comfortable lead in the Heisman race thus far.

The biggest movers in the Heisman race have been from Oklahoma Sooners quarterback Jalen Hurts and LSU Tigers quarterback Joe Burrow. Both quarterbacks have similar profiles as they transferred from their previous universities because of playing time concerns.

Burrow started the season as a longshot to compete for the Heisman trophy with +20000 odds at sportsbooks. Now, Burrow is tied with Jalen Hurts with the second shortest odds to win the Heisman Trophy at +300.

Burrow has seen his Heisman odds shift the most after the fifth-ranked LSU Tigers topped the seventh-ranked Florida Gators in Death Valley last Saturday 42-28. In that game Burrow was spectacular, he threw for 293 yards, three touchdowns, and no interceptions. Furthermore, he only had three incompletions all game against a Florida Gators pass defense that was considered one of the top units in the nation.

LSU’s senior signal-caller on the season has thrown for 2,157 yards, 25 touchdowns, and three interceptions, all while leading the Tigers to an undefeated record this season. Despite playing in the SEC against some of the best defenses in the country, Burrow is still showing why he’ll be among the Heisman finalists in New York at the end of the year.

Jalen Hurts was never considered a longshot for the Heisman race coming into this season as sportsbooks gave him favorable odds of +600 to bring Oklahoma its third consecutive Heisman Trophy winner.

Hurts has seen his odds for the Heisman improve, as sportsbooks now give him the second shortest odds to win the Heisman at +300.

Hurts led the sixth-ranked Oklahoma Sooners to a 34-27 victory over their Big-12 rival the Texas Longhorns. In that game, Hurts threw for 235 yards, three touchdowns, and one interception. He added in 131 rushing yards and one touchdown as well. This was the third game of the season where Hurts has thrown for at least 200 yards and ran for 100 yards.

On the season Hurt has put up astonishing numbers he’s thrown for 1,758 passing yards, 17 touchdowns, and three interceptions while adding in 630 rushing yards and eight rushing touchdowns. He’s putting together a truly historic season and has cemented himself in the Heisman Race.

With Burrow and Hurts making their Heisman cases, it has caused Clemson Tigers quarterback Trevor Lawrence to see his Heisman hopes dwindle.

The sophomore for Clemson was one of the favorites to compete for the Heisman this year when the season began; he had the second shortest odds of being the first Clemson Tiger to ever be awarded the Heisman trophy at +250. Lawrence is now considered a longshot for the Heisman at sportsbooks with +7000 odds.

Although Clemson hasn’t struggled as a team this year, Lawrence hasn’t had a Heisman worthy season he’s only thrown for 1,301 yards, 11 touchdowns and has six interceptions. He has added in four rushing touchdowns, but his season Lawrence hasn’t been as dominant as some might expect. Which is why Lawrence has been considered out of the Heisman race.

Clemson does have a weak schedule coming up that would allow Lawrence to gain ground in the Heisman race. But at this point in the season, the Tigers probably have their eyes set on the College Football Playoff and not an individual honor.

With the college football season approaching the halfway mark, USAOnlineSportsbooks.com knows to keep an eye out for these players to continue to be a part of the Heisman conversation.