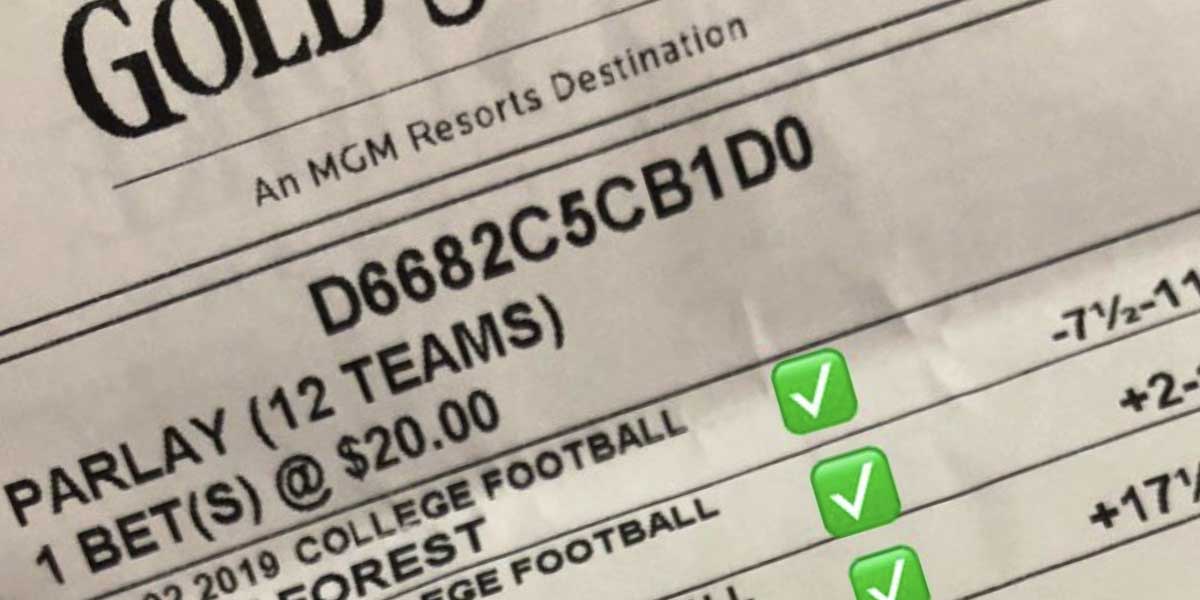 NEW YORK – While the skill of sports betting comes easy to some people, others continue to throw money into a pit of despair. Last month, a younger sports bettor from New York showed the world just exactly how to bet on sports through a method that many falter with – parlays.

After being up nearly one-third of a million dollars, Parlay Patz more than doubled his money betting on an NFL Sunday with a 13-team parlay.

The King of Parlays has many notable accomplishments from his run of winning wagers, but none are as impressive as the $463,877 he won over the course of four wagers, in a seven-day period.

Patz is now definitely considered a sharp (professional) but square bettors (general public) are notorious for betting with their hearts and not their heads. Plenty of examples from legal sports betting in 2019 have proven this to be the case.

To begin the NFL betting season, sports bettors in New York were excited about having a sportsbook at the stadium of their beloved New York Giants and New York Jets. What could be better for a bettor than putting money where their mouth is, and seeing their bet unfold while at the stadium?

The ending result was not as expected, as the Jets (5-9) and Giants (3-11) have the seventh and third-worst record this season of any NFL team, respectively.

Still, the sportsbooks in New Jersey saw plenty of action come in on the home teams before the season began.

While the Jets improved their roster in the offseason, bettors found themselves in the typical trend of betting with their emotions.

These trends continued throughout the NFL season, and bettors found themselves constantly adding more and more money to their sports betting accounts without any profit. But the NFL isn’t the only sport that New Yorkers found themselves heavily invested in the home teams.

The New York Yankees had nearly 90,000 more bets than any other team and were the most popular team by both bet count and handle. While they were a team destined to make a deep playoff run, the sheer number of extra bets on the Yankees is the proof in the pudding.

Improving Your Betting Habits With Help From Parlay Patz

While parlays are a sure way to lose money, Patz is still a prime example of how bettors should interact with a sportsbook. Through a system he put in place, Patz realized a winning strategy and rolled with it – regardless of which team he was betting on. He showed no favoritism and only looked at winning money as opposed to hoping his bet would hit because he had bet on his favorite teams.

“My life has improved because of the techniques I’ve used that have won me all this,” said Patz.

Whenever a big-time bettor makes the headlines, there is always something to take note of from their successes. Patz is no stranger to admitting his defeats – something that some bettors like to avoid in conversation. He is aware that with betting, sometimes one will be a winner but most times a loser.

But Patz’s strategy comes from only betting on teams to win (on the moneyline). He avoids point totals and spreads because of his understanding that athletes are only looking to win the game at hand, not win by a certain amount.

Patz is also keen on making sure he is wagering on the right games. He never bets on sports just to have action and focuses on what he knows to beat the books.

“I can go days without looking at a game or at scores,” said Patz.

Though these are only a handful of betting tips and strategies, it still gives plenty of sports bettors an opportunity to refocus their game plan. Not many will have the same success as Parlay Patz but there is always something to learn from a bigtime bettor.