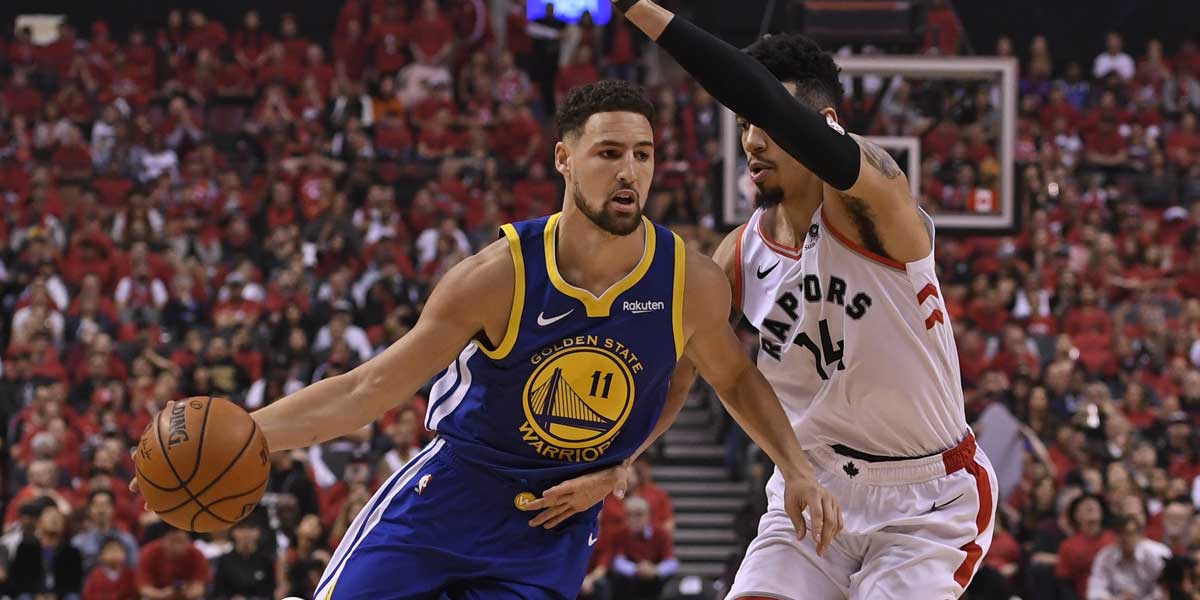 OAKLAND, Calif. – On a three-point attempt at the beginning of the 4th quarter during Game 2 of the NBA Finals, Klay Thompson appeared to injure his leg. Despite playing another three minutes after the awkward landing, it was easy to tell it was bothering him.

Thompson looked physically uncomfortable on the court until he couldn’t walk up the court, begging for his team to stop a Raptors fast break with a foul.

Frustrated, Thompson hobbled back to the locker room, without returning, and was seen limping out of the stadium after the game’s conclusion. He is scheduled to have an MRI on Monday in Oakland.

Thompson was still able to cover many of his player prop bets, despite missing out on the last 8 minutes of action. He was the Warrior’s leading scorer (+240) and even surpassed his total projected points (22) and 3-pointers made (3.5) for the game.

However, he is not the only Warriors’ player that went back to the locker room mid-game.

Kevon Looney took a hard fall on his shoulder midway through the first quarter while playing defense on a driving Kawhi Leonard. He suffered a chest contusion, according to the Warriors, and will have an MRI and CT scan on Monday.

Looney did not return for the entire second half of the game, though he briefly played after coming back from the locker room in the second quarter.

Further into the game, Andre Iguodala was a victim of a hard, yet clean, screen from Marc Gasol. On the ground for a possession and a half, the Warriors were forced to call a timeout, as Iggy laid motionless, face-down on the court.

After the whistle, he got to his knees and shook his head, ultimately heading back to the locker room. The injury seemed to be minute, however, as Iguodala came back to hit the game-winning 3 on the Warriors’ last possession.

Iguodala is not listed on the team’s injury report so far heading into Game 3; however, Looney (and Durant) appear to be out for at least one more contest. Klay’s status is up in the air but both coach Steve Kerr and himself seem sure that he’ll get his playing time for the first game in Oakland.

Despite these injuries, the Warriors secured Game 2 and homecourt advantage. In doing so, the odds for the reigning champions to repeat their title run (-280) have returned to their pre-Game 1 level.

The Warriors (-5.5) will take on the Raptors in Oakland on Wednesday, June 5 at 9 PM EST. They are also the favorite at online USA sportsbooks to win the first quarter (-2) and increase that lead through halftime (-3). The over/under (213) remains constant, as the first two games posted similar numbers.