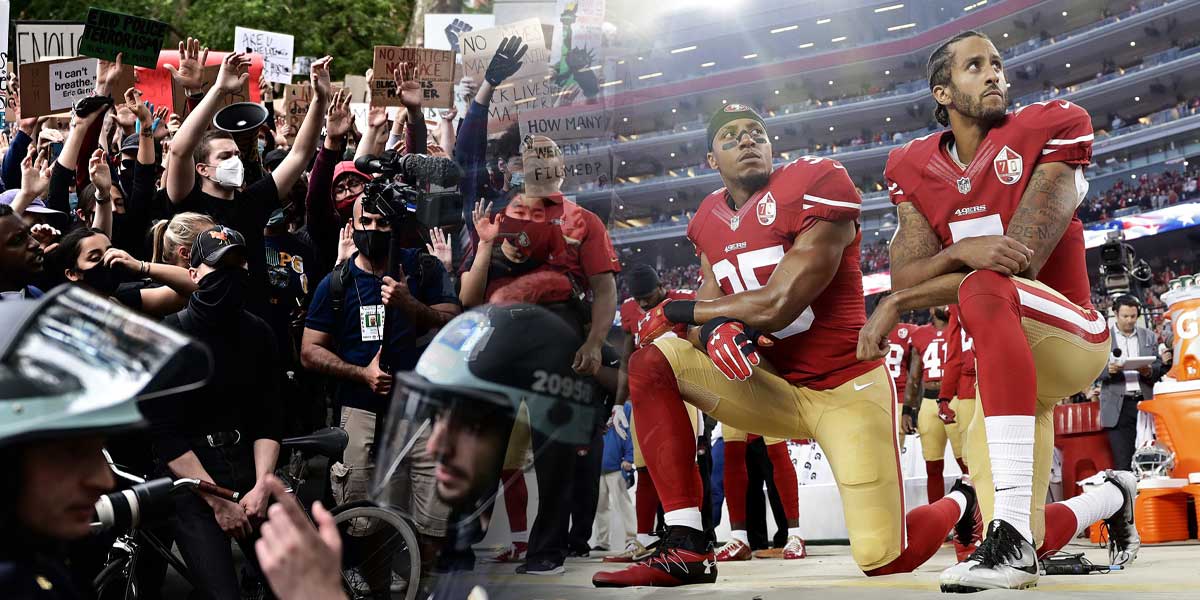 SEATTLE – In a major sense of irony, current events have once again thrust Colin Kaepernick into the public eye. NFL prop bets on Kaepernick getting back in the NFL have resurfaced with the focus on the nationwide protests and police brutality.

Kaepernick has had spurts of the spotlight since being let go by the San Francisco 49ers after the 2016 season, becoming a free agent in 2017.

While the 49ers disguised the release of Kaepernick as an excuse for him not fitting into their playbook strategies, it was that season that Kaepernick decided to take a knee during the National Anthem.

The bad publicity alone was reason enough to sever ties.

The knee he took was meant to be seen as a protest against the oppression of the African American people and the senseless deaths that plagued the news.

Many people were confused by the protest while many others followed afterward in solidarity with Kaepernick and his cause.

But it was this act that would ultimately lead to his NFL career going up in smoke.

Will Colin Kaepernick Be On An Active NFL Roster For Week 1 Of The 2020 Regular Season?

Since the death of George Floyd and others that have not made it in the news, the NFL and more of the country are beginning to see Kaepernick in a new light.

Betting on Kaepernick at online sportsbooks to be active in the NFL has merit because of the reexamination.

Seattle Seahawks head coach Pete Carroll is most definitely a fan of the quarterback now.

“There was a moment in time that a young man captured,” said Carroll. "He stood up for something that he believed in. What an extraordinary moment it was that he was willing to take. I don’t know that he had any idea what the impact would be, as it turned out. But what a symbol of courage and vision. “I think it was a big sacrifice, in the sense, that a young man makes. But those are the courageous moments that some guys take and we owe a tremendous amount to him, for sure.”

While high praises came from Coach Carroll, the Seahawks have an MVP-esque leader amongst their team in Russell Wilson.

Seattle may not be the team that gives Kaepernick a chance, but odds for Kaep’s landing spot offer excellent NFL odds.

What Team Will Colin Kaepernick Play For Week 1 Of The 2020 Regular Season?

Kaepernick is now receiving praise from the same people that were against him for kneeling years ago so these bets may be quite profitable if the NFL offers him a spot with a team.

Other NFL players that kneeled following Kaepernick’s lead are not happy with NFL Commissioner Roger Goodell’s statement on his sadness over what’s happening in the world.

Players were unimpressed by the stale words of the Commissioner, considering the treatment of Kaepernick four years prior.

This can only help Kaepernick’s case, in the long run, to get his second chance at an NFL career. And with that, sportsbooks are ready to take some bets on the topic.