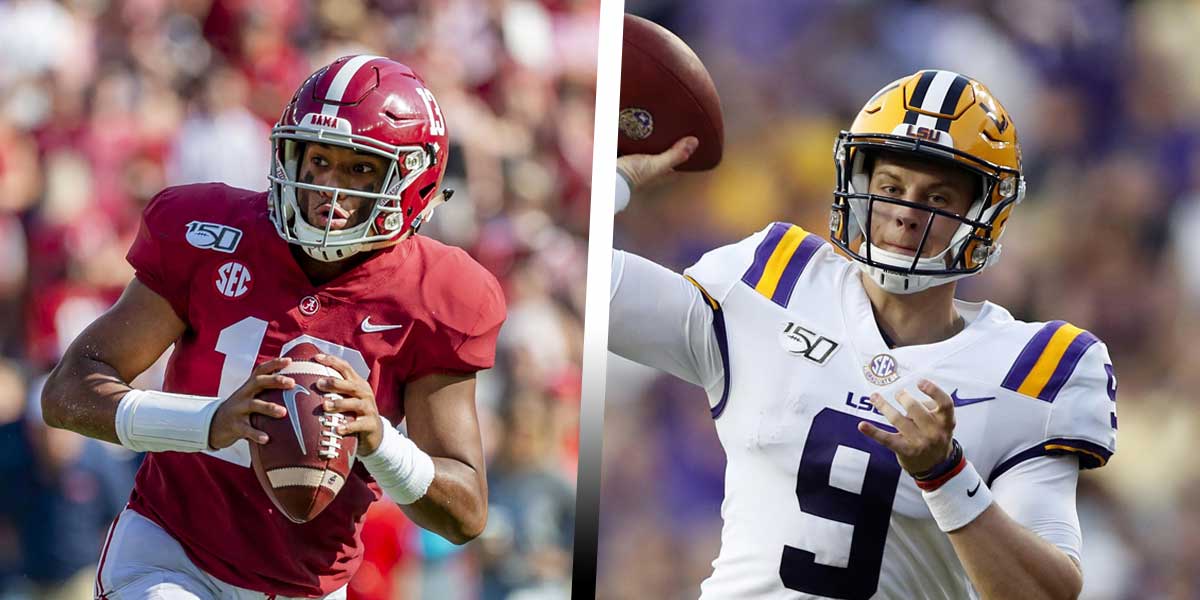 TUSCALOOSA, Ala. – In Week 11 the No. 2 LSU Tigers are the road team taking on the No. 3 Alabama Crimson Tide in a matchup that will have major implications across the college football landscape. Both teams come into this game undefeated and have their quarterbacks sitting atop the Heisman Trophy race.

The Alabama Crimson Tide are 6-point favorites to extend their winning streak against the LSU Tigers to nine games. The last time these two teams met the Crimson Tide won on the road 29-0. This year the game should be close as both teams are evenly matched for the first time in a while.

The winner of this game will likely play in the SEC Championship game and will have an impressive victory on their resume for the College Football Playoff committee to consider. With a lot at stake in this SEC matchup for both teams, let's focus on the quarterback matchup in this game between LSU quarterback Joe Burrow and Alabama quarterback Tua Tagovailoa.

Tagovailoa has had an elite season so far for the Alabama Crimson Tide. Despite missing the Crimson Tide’s last game against the Arkansas Razorbacks due to an ankle injury, the junior quarterback still has the highest QBR in the nation at 95.8. Tua won’t be 100% healthy in this game against LSU but he should still be able to deliver another Heisman worthy performance. On the season Tagovailoa has thrown for 2,166 yards, 27 touchdowns, and two interceptions while completing 74.7% of his passes. A stat line like this has cemented Tagovailoa in the Heisman Trophy race as it’s safe to assume he’ll be among the finalists for the award.

Coming into the season Tagovailoa was one of the betting favorites to win the Heisman trophy. However, USA sportsbooks currently have Tua listed with the third shortest odds at +375 to get his first Heisman Trophy. A big performance against LSU could send the Alabama quarterbacks Heisman odds back into the favorite position. So now might be the best time to maximize the return on Tua’s Heisman odds.

Burrow has been one of the best quarterbacks in the nation all season long. He’s thrown for the second-most yards (2,805) and touchdowns (30) in the nation through eight games this season. Burrow has protected the ball all season as he has only thrown four interceptions. He’s been the main reason why LSU is still undefeated on the season and is averaging 46.8 points per contest. It shouldn’t come as a surprise to anyone that Burrow is now the betting favorite to win the Heisman with sportsbooks listing him at -110 odds.

Now that Burrow has supplanted Tagovailoa in the Heisman race, all eyes will be on him to lead LSU to victory over the Crimson Tide and keep their College Football Playoff hopes alive for another week. If LSU wins this game, Burrow might already have the Heisman Trophy in his back pocket. A loss against Alabama wouldn’t completely ruin Burrow’s Heisman hopes either; he’s played a harder schedule compared to other Heisman hopefuls like Tagovailoa and Oklahoma Sooners quarterback Jalen Hurts. With that in mind, it’s clear to see why Burrow deserves to be leading this year’s Heisman race. However, if Burrow wants to remain at the forefront of the Heisman race, he will have to play his best game of the season against a stout Alabama defense.

Kickoff for the LSU-Alabama matchup is set for 3:30 p.m. ET Saturday and the game will be broadcasted by CBS.