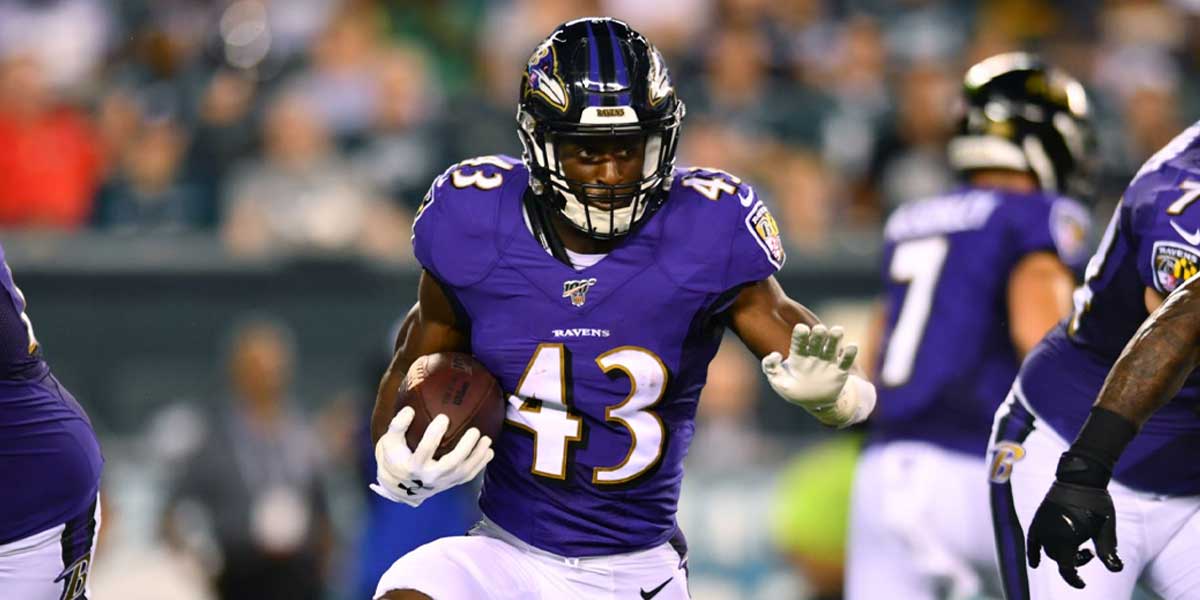 BALTIMORE – Fantasy football GM’s who were not successful on the waiver wire heading into Week 12 of the season can begin looking at other options in free agency.

There are potential free agents at all different positions that are available in most leagues and should be added to any roster.

Starting with Justice Hill of the Baltimore Ravens now is his time to shine as he will certainly be getting the opportunities he needs.

Hill has immediately shifted into the RB2 slot for the Ravens, backing up Gus Edwards, as both of the team’s starting running backs, J.K. Dobbins and Mark Ingram, have tested positive for COVID-19.

Hill has not seen very much action this season, but he is sure to get the touches that he needs in order to be productive.

The last time Hill got a productive snap count was last season against the Steelers (10 rushing attempts for 39 yards and a touchdown) but the fact that he has a matchup here with the Steelers is positive. With that said, Hill should be added in deeper leagues in need of a running back.

Breshad Perriman seems to be getting the ball rolling here late in the season as he has made his case to be a productive fantasy wide receiver.

He has been able to make things work no matter who is under center which is also a plus. He is one of the bright spots on this winless New York Jets team and also has a favorable schedule coming up to finish the season which could make him a solid flex play for the remainder of the season.

Zach Pascal is another solid receiving option to add to any roster. He is not the teams go-to option, but he does get the targets in order to be a productive receiver.

It also helps his case even more that Parris Campbell, the teams WR2, is on IR and also that T.Y. Hilton has been having one of his worst years as a pro.

He also has a very nice slate of games on deck to finish the season - four of the next five games are coming against teams in the bottom 15 when defending opposing quarterbacks. Pascal would serve a great role on any team that is missing a receiver due to injury or in deeper leagues as well.

In a tight end position that is seeing one of its worst fantasy football seasons, Jordan Reed could turn out as an above-average add to a team in desperate need.

Reed has played in just five games this season as the team’s starting tight end with George Kittle remaining out. He has been a boom or bust player as seen from his player props at online sportsbooks but is worth taking the risk on considering that there really aren’t many reliable options out there right now.

It helps his case that he is coming off of a six-target game where he saw 62 receiving yards on five receptions for 8.7 points as well as it shows that the offense is incorporating him into their game plan.