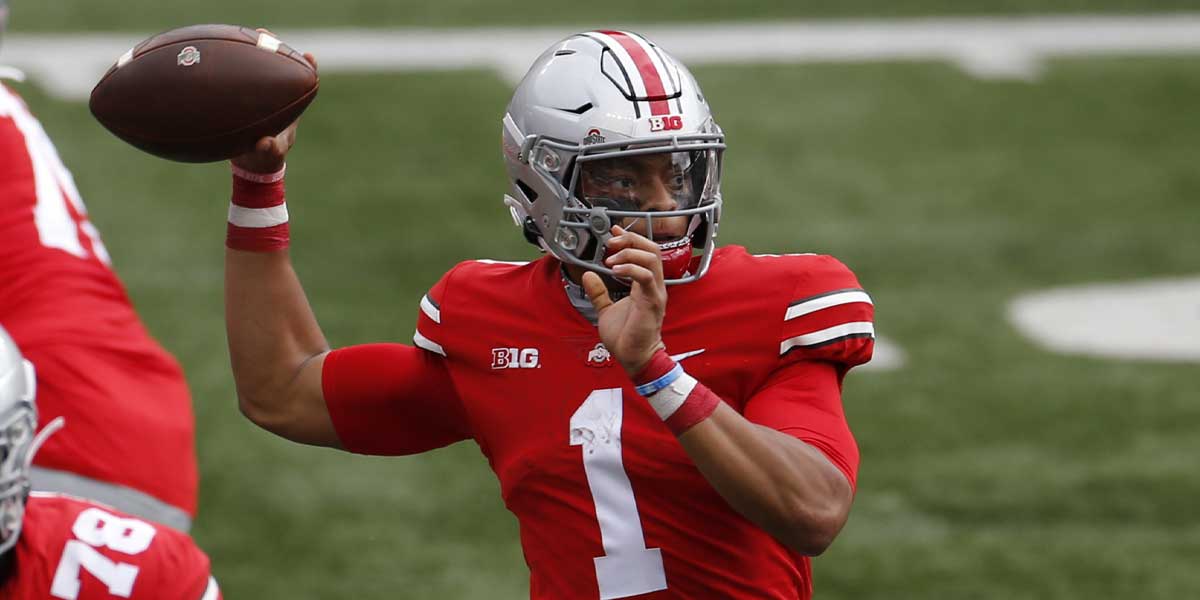 COLUMBUS, Ohio – The race for the Heisman Trophy became just a bit more complicated this past weekend, with a new odds frontrunner emerging.

Fields wasn’t the only player with big movement, as Florida’s Kyle Trask put himself firmly back in the competition.

Full odds for the Heiman Trophy winner are currently available on all of the major online sportsbooks.

The Ohio State Buckeyes were able to get the win over Rutgers on Saturday to get to 3-0 on the season. Justin Fields was paramount in the victory, scoring six total touchdowns and throwing for 314 yards.

The effort was enough to life Fields into the driver’s seat for the Heisman trophy going forward. Fields was a finalist for the award in 2019, where he finished third behind Joe Burrow and runner-up Jalen Hurts.

Fields will have to fend off a trio of elite quarterbacks that are hot on his tail.

The first of which is Mac Jones, who had the week off as the Crimson Tide were on a bye this past Saturday.

Jones has been a major surprise this season. After exiting the offseason the winner of a QB battle with Freshman Bryce Young, Jones has only put up 2,196 yards and 16 touchdowns through the first six games of the season.

Jones has a 95.4 QBR, and is rivaling the stats put up by Burrow during his legendary 2019 campaign.

The elder statesman in the race is Trevor Lawrence, whose Clemson team suffered their first regular-season loss since 2017 this past weekend against Notre Dame.

It took two overtimes for the Irish to take down a Trevor-less Clemson, showing just how important the long-haired thrower is to the Tigers’ success.

It appears that Lawrence’s COVID debacle will certainly hurt his chances at winning at Heisman, as he now finds himself in a firm third place on the college football odds board.

The third QB to watch is an interesting one, and probably the best value currently on the board.

Florida Gator quarterback Kyle Trask has been electric this season, flourishing in Dan Mullen’s offense that has finally turned the corner into elite territory.

The Gators were able to beat up on the Georgia Bulldogs for the first time in four years, earning a key win for the team’s SEC Championship and College Football Playoff aspirations.

Through five games, Trask has thrown for 1,815 yards and 22 touchdowns, with just three interceptions and a 92.9 QBR.

The path for Trask to the Heisman likely runs through Atlanta, where a date with Alabama and Mac Jones appears to be on the menu.

The winner of that duel will have an inside track to the Heisman, but it still might not be enough to overtake Fields.

Fields has a huge advantage in that Ohio State only has five regular-season games remaining on its schedule. While this means Fields will have smaller totals, the hardest team on the Buckeyes remaining slate is the Indiana Hoosiers.

While Fields will be lighting up the stat sheet, Jones and Trask will be facing teams like LSU, Auburn, Tennessee, and Arkansas.

The SEC is certainly not having its best year top to bottom, but it is hard to argue that teams like Illinois and Michigan State pose a harder challenge than those found down South.

Nevertheless, the race will likely come down to a few key moments that define the season for these terrific athletes. College football fans will be watching as it all unfolds.