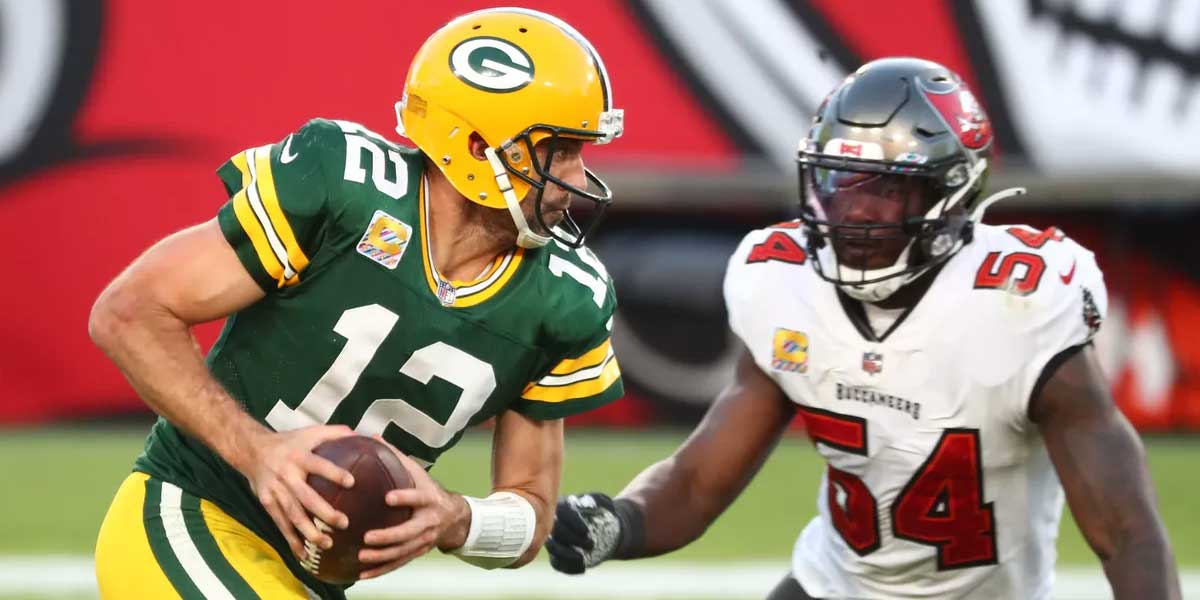 The two teams have already met once this season, in a Week 6 matchup that saw the Buccaneers dominate the Packers, 38-10.

That matchup is only one data point, however, so in this article we attempt to perform some in-depth analysis on some of the most intriguing prop bets of the game.

In addition, each section begins with a bit of line shopping, so if a reader sees a bet they like, they can know where good NFC Championship odds on it are.

In his two previous playoff games this year, Brady has passed for a total of four touchdowns, with two in each game. Against the Packers in the regular season, Brady passed for only two touchdowns despite the Bucs winning 38-10.

During the regular season, Brady passed for three or more touchdowns seven times.

With the exception of Denver, each of the teams Brady passed for three or more touchdowns against was a bottom half team in terms of passing touchdowns allowed.

Here are the teams, followed by their ranking in terms of how many pass touchdowns they allowed.

The Green Bay Packers are 10th in passing touchdowns allowed for the season, giving up an average of 1.4 touchdowns per game.

Note that on DraftKings, Brady Under 2.5 Passing TDs sits with -210 odds, which seem to be well deserved in an attemped trip the Super Bowl 55 against the MVP's team.

At first glance, these are quite similar lines, and taking the extra value for a few added yards needed to cover might be a good idea.

Let’s check out Jones’ numbers for the season to see if that holds up.

For the entire season, Jones never finished with a rushing yards total wherein 59.5 would cover but 62.0 would not.

Including the playoffs, Jones has only missed 62+ yards five times this whole year, against the following teams:

Worth noting is that in the 38-10 drubbing the Packers received at the hands of the Buccaneers, Jones had by far his worst game of the season, putting up only 15 rushing yards on 10 attempts.

This lends itself to a particularly low line for this matchup against a Bucs defense that ranks first in the league in rush yards allowed per game.

It’s not just that the Bucs are first in rushing yards allowed, it’s that they’re dramatically better than their competition.

The Seattle Seahawks allow the fifth least rushing yards in the league, and they’re at 99.6 yards allowed - about 18 yards worse than the Bucs.

It’s hard to evaluate Leonard Fournette’s role in the Tampa Bay offense going forward. He was a key part of their offense in the absence of Ronald Jones, rushing for 93 yards in the Wild Card Round against Chicago.

With Jones’s return, Fournette saw similar usage (19 rushes against Chicago, 17 against NO), but lower production, putting up 63 yards against the New Orleans Saints.

Jones was a gametime decision last week against the Saints, and it remains unclear who will be starting in this matchup.

Fournette’s Over is fairly precarious - he’s likely to hit it at either point if he gets the volume he did in previous playoff rounds, but bettors should keep an eye on Ronald Jones before pulling the trigger.

Tampa Bay Head Coach Bruce Arians has been unwilling to distinguish between the two in terms of quality.

"Both of those guys I consider starters, so it's a matter of just getting guys in there and keeping them fresh," said Arians.

Jones was a limited participant in practice this week.

Betting on Davante Adams has been a solid play all season, with the wideout putting up the best numbers of his career.

However, his reception numbers have had a lot of variance in them. He’s hit eight or more receptions seven times this season out of 15 games, including the playoffs.

Against the Bucs in Week 6, Adams was held to six receptions for 61 yards, which can be interpreted in multiple ways.

One mindset would say that Adams came close to eight receptions in a matchup that saw his team get utterly demolished.

The other mindset would say that he did not manage to hit his target in that game, and there’s no reason to believe he will in this one.

NFL betting enthusiasts could go both ways when it comes to Adams in this matchup.

Robert Tonyan has had over four receptions in eight games, including the playoffs this year.

Against Tampa Bay in Week 6, he had three receptions on four targets, playing 59% of the snaps.

For the season, Tight Ends have logged 98 receptions against Tampa Bay in 19 games, and this trend has continued in the playoffs.

Logan Thomas of the Football Team snagged five balls against Tampa Bay in the Wild Card Round, while Jared Cook hauled in five receptions as well for the New Orleans Saints.

Tonyan is the premier receiving option at the Tight End position for the Packers, and the second leading reception getter on the team with 52.

His competition at the Tight End spot is Marcedes Lewis with 10 receptions and Jace Sternberger with 12 receptions.

Neither of those players logged a reception in the Packers’ one playoff game so far, against the LA Rams.

Both the Over and the Under have viable line shopping opportunities, with online sportsbooks valuing each at different levels of probability.

This game looks to be fantastic, and bettors should keep their eyes on all the sportsbooks they can in order to find the best odds.