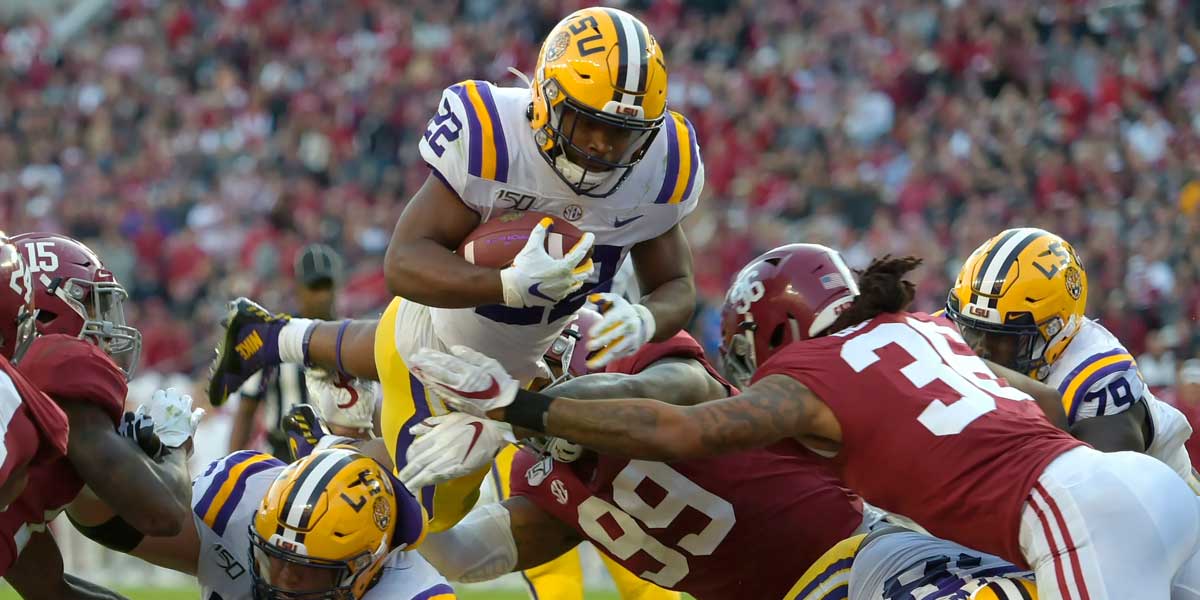 BATON ROUGE, La. – In what is normally quite the historic matchup toward a CFP berth, the Alabama Crimson Tide will take on the LSU Tigers.

While the Tide are rolling and favored to win the National Championship (+125), the Tigers are fresh off of their title run.

Still, the tables have turned against an LSU Championship team that lost 14 players to the NFL Draft in 2020. As the rebuild for the Tigers has officially commenced, the domination of Alabama is only continuing.

In what is being touted as the largest National Championship underdog spread in over 40 years per ESPN, the Tigers host the Crimson Tide for an 8 p.m. ET primetime matchup.

Despite being over four-touchdown underdogs, the Tigers are expected to keep it close – at least for the first quarter.

Nick Saban is 10-4 against LSU and Alabama has won eight of the last nine, so it makes sense they are projected to take the first quarter. In fact, Alabama has shown this domination through a few aspects of the scoreboard.

In the 14 games Saban has gone against LSU, the Tigers have only averaged 16.25 points. Take out the 46-41 LSU victory last season and the Tigers’ average drops to 13.55 points. Despite winning last year, in the eight losses beforehand, the Tigers were held to an average of 9.13 points and never scored more than 17 points.

They were also shutout three times.

Even worse, this will be the first time under Saban that he has faced an unranked Tigers’ team, which some might think could lead to an even bigger domination.

The Tide have scored a first-quarter touchdown against LSU in all three of the last meetings, giving them the entry touchdown to push the spread. Aside from the last meeting, the Tigers were shut out twice and didn’t get their first (of 10) points until making a field goal halfway through the second.

If the Crimson Tide can push the envelope, it may appear easier to cover the first-half spread as well.

While the 17 points should come rather easy in comparison to past college football betting results, the over-under may be a little more difficult to hit.

Set at 35.5 points, the Crimson Tide have only surpassed this total one time over their last four first halves.

One interesting note is how much of a difference there is between the first half and overall game line.

Projected to lead by 17 at the half, the Tide are favored by 29.5, giving them another near-two-touchdown advantage over the last two quarters. However, when looking at the past trends, it may be in the Tide’s favor.

Only allowing 17 points over the last five games’ second halves, the Tide has put up 111 points in that same time.

It appears Alabama will run away with this matchup, however, some may think LSU can cover the spread in this rivalry game. Saban has never beaten LSU by 30 points or more, and even better, has only beaten LSU by more than 14 points three times.

Still, over 90% of the public’s early college football betting action is filtered on the Tide. Will the online sportsbooks take the victory along with LSU, or is Alabama just too dominant?