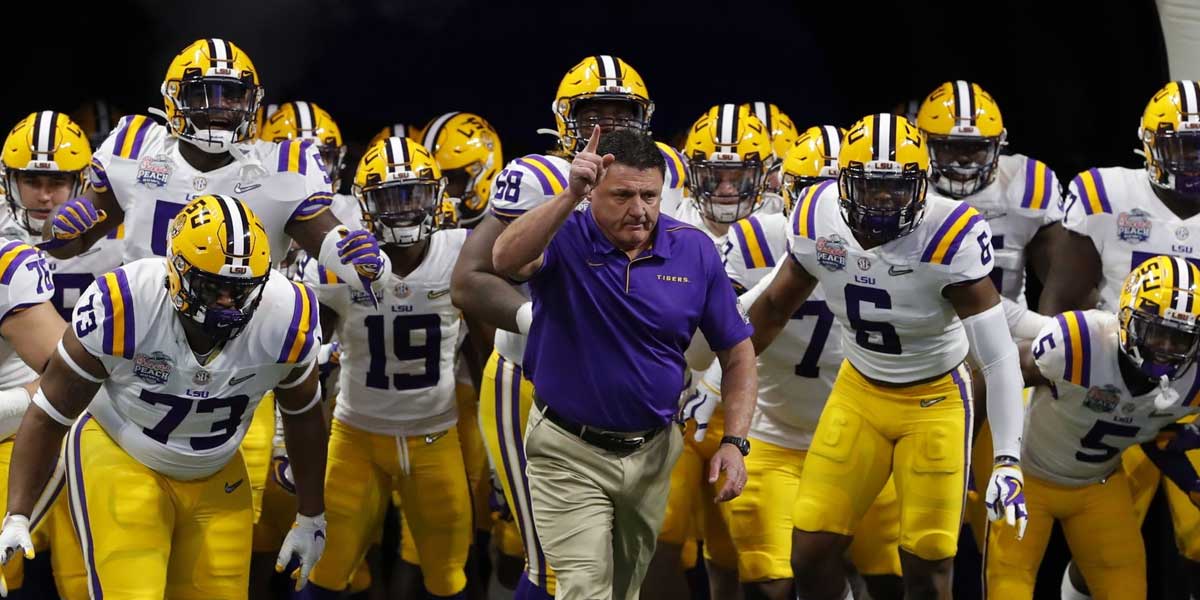 NEW ORLEANS – The LSU Tigers have dominated every team that has crossed their path in their journey for the school's fourth National Championship.

That path has featured six games against opponents ranked in the Top 10, games that the Tigers have won by an average margin of 15.1 points per game. The latest victory coming by way of 63-28 Peach Bowl blowout victory against the No. 4 Oklahoma Sooners.

On Monday, the College Football Playoff Championship game will test the LSU Tigers in a way that they haven’t been tested all season.

LSU (-220) will have to face the defending national champion Clemson Tigers (+185) to complete one of the most dominant college football seasons ever. Although LSU is a 6-point favorite for the title it won’t be an easy feat taking the title from Clemson as they’ve been dominant this season as well.

However, Clemson’s defense will have a hard time stopping LSU’s playmakers from putting points up on the board.

Both teams have performed well ATS this season, but this game should come down to the wire as these teams are evenly matched. Picking Clemson against the spread or the taking LSU on the money line odds might make for an advantageous bet for lovers of the purple and yellow.

LSU’s offense will create many matchup problems for Clemson. LSU ranked first in the nation in points per game (48.9) and yards per game (564.1) this season. Their passing offense with wide receivers Justin Jefferson and Ja’marr Chase , who both have 18 touchdown catches and over 1400 receiving yards this season, are arguably the best-receiving duo in college football.

Many expect both Jefferson and Chase to go over 100 yards receiving against Clemson’s top-ranked passing defense. LSU’s running back Clyde Edwards-Helaire ran for 1,304 and 16 touchdowns this season but all eyes will be on Heisman Trophy winner Joe Burrow to deliver another stellar playoff performance.

Burrow will have the entire Bayou on his back as he leads LSU into the Mercedes-Benz Superdome tonight. Burrow is looking to add a national title to his Heisman trophy-winning season. The senior has thrown for 5,208 yards, 55 touchdowns, and six interceptions while completing 77.6% of his passes through 14 games.

He’s also added 310 rushing yards and four touchdowns that push his total touchdown count to 59. Burrow has been the most dominant player in college football this season and is the presumed No. 1 pick in the upcoming 2020 NFL Draft.

Burrow alone is the biggest reason why LSU has the edge despite Clemson having Trevor Lawrence on the other side of the field. His record-setting eight-touchdown performance against Oklahoma in the Semifinals showed that Burrow is locked in this postseason.

Other Players To Lookout For

With so much talent on both teams and two of the highest-scoring offenses in the nation, USA Sportsbooks have the total listed at 67.5-point. The odds on the Over are more tempting since both teams have averaged well over 40 points per game this season.

A player to look out for on LSU’s defense will be junior safety Grant Delpit. The All-American safety is a lock to be a first-round pick in the 2020 NFL Draft and is this year’s Thorpe Award winner which recognizes the best defensive back in the country.

On the season, Delpit has recorded 59 tackles, two interceptions and one sack with seven passes defended. His range as a safety prevents big plays from happening deep and he can also be found making plays at the line of scrimmage.

If LSU simply plays the way they’ve played all season against top competition they have certainly earned the crown as national champions this year.

In what should pretty much be a home game for the LSU Tigers in the Mercedes-Benz Superdome, kick-off is scheduled for 8 p.m. EST and the game will be broadcasted by ESPN.