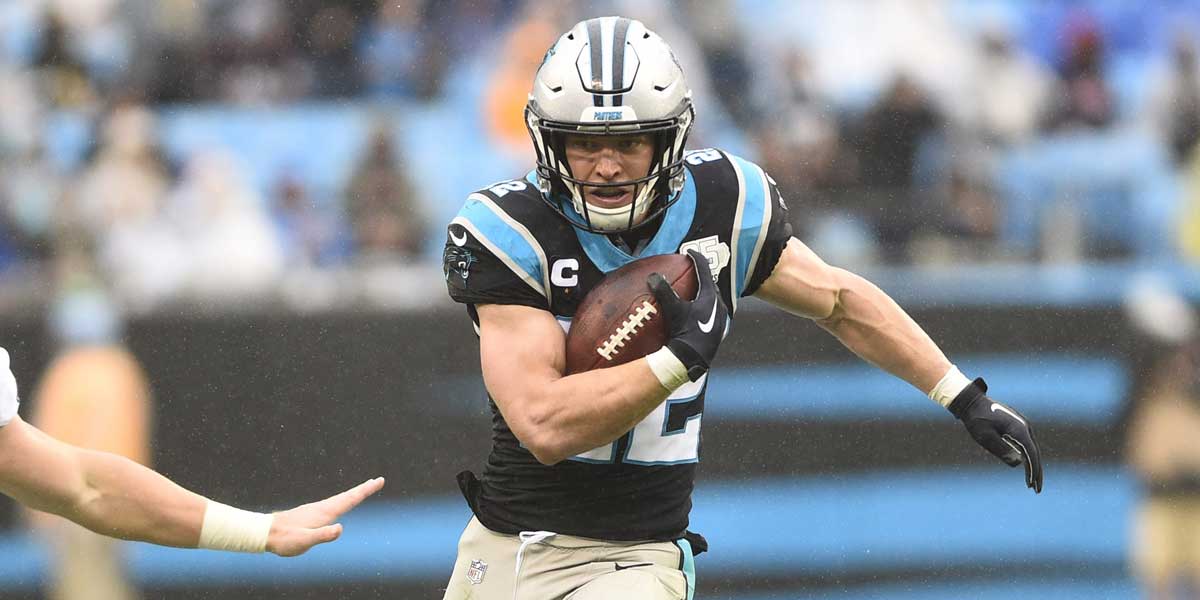 LAS VEGAS – Madden has released their ranking for the top 10 running backs in Madden 22 and Christian McCaffrey leads the way as a 97 overall. Derrick Henry, despite being the betting favorite for most running back awards and honors, is a 96 overall along with Nick Chubb.

Should Derrick Henry Be The Top Rated RB?

Derrick Henry had an incredible season in 2020. He ran for 2,027 yards, nearly 500 more yards than the next best, and tallied an NFL-leading 17 rushing touchdowns. Meanwhile, Christian McCaffrey is the higher-rated player despite only appearing in three games last season.

The question remains as if Madden accurately ranked the NFL’s best running backs.

McCaffrey isn’t near the top of rushing yards leaders or rushing touchdowns odds boards on online sportsbooks, but rushing isn’t what makes him such a talented player. His receiving skills are what separates him from the pack.

However, he is projected to have a major bounce-back season in the rushing game.

Whether McCaffrey is truly the No. 1 running back in the league is up for debate, but it’s tough to argue that he’s not in the conversation.

Derrick Henry had one of the best seasons a running back has ever had last year. He recorded the fifth-most rushing yards in a single season in NFL history. He also averaged over a touchdown per game.

While his 2,027 yards is a hard number to match, sports betting sites are giving him a fighting chance.

Henry is limited in the receiving game, but he may very well be the best rusher of the football in the league.

Should Dalvin Cook Be Ahead Of Nick Chubb?

Dalvin Cook was the only running back even relatively close to Henry’s 2020 numbers as he posted 1,557 yards and 16 touchdowns. Chubb finished the season with 1,067 yards and 12 touchdowns, but did so on 122 less carries than Cook.

Chubb led all starting running backs in yards per attempt in 2020 with an impressive 5.6. However, he didn’t get the workload as some other top running backs as he only amassed 190 carries after missing a couple of games due to injury.

NFL betting sites are projecting a career-best year from Chubb in 2021.

Chubb’s biggest detriment is his involvement in the passing game as he only recorded 16 receptions. With Kareem Hunt on the team, he may not be involved much more through the air, but behind arguably the best offensive line in football, he could prove to be worth his 96 OVR rating.

Honestly, there isn’t much of a debate as to who was the second-best running back in 2020 and the candidates begin and end with Dalvin Cook’s name.

He was second in both rushing yards and rushing touchdowns while also being within the top 10 in receiving yards at the position despite seeing the 19th most targets per game.

Cook has a higher rushing yards total than Chubb and can be thought as a lock to be more involved in the receiving game as well. If there’s an argument to be made about Madden’s rankings, it’s that Cook is deserving of being higher on the list.

Generally, the rest of the list seems pretty accurate. Sure, there are arguments to be made that Alvin Kamara deserves a higher overall or maybe that Saquon Barkley should be ahead of Aaron Jones, but for the most part the Madden overalls and combination of 2020 stats and projected 2021 totals seem to line up.

The only exception may be Ezekiel Elliot (88 OVR), who has a higher projected rush total (1099.5) than Josh Jacobs (89 OVR) and Joe Mixon (88 OVR). However, his 2020 performance likely puts him on the same tier as those players.