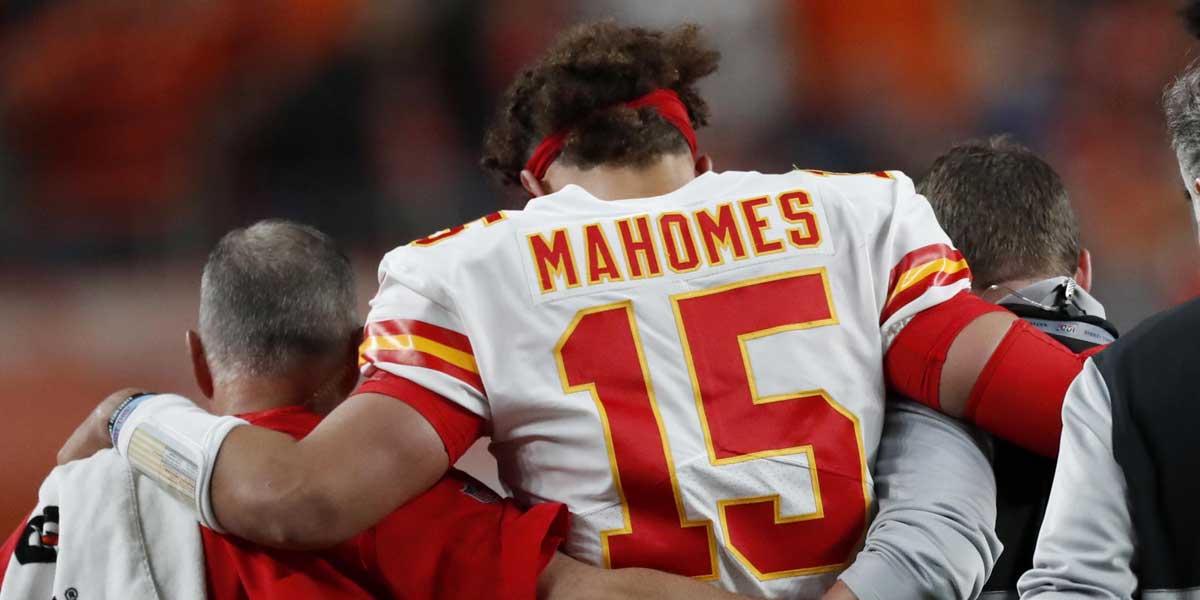 DENVER – On Thursday, the Kansas City Chiefs took care of business in Denver, beating the Denver Broncos 30-6. The victory came with such expectations for the Chiefs, but a knee injury to reigning-MVP Patrick Mahomes was the furthest thing from expected.

With 10 minutes left in the second quarter on a 4th and 1 call inside the 5-yard line, Mahomes took a quarterback sneak for a first down but failed to get up after the play was over. Taking his helmet off and covering his eyes, Mahomes suffered a knee injury, though he was able to walk to and from the locker room without the assistance of others.

According to the early reports, the injury to Mahomes will have a best-case three-week time of recovery.

The Chiefs failed to find the endzone without Mahomes in for the drive but went up by a touchdown after making a short field goal. Before Mahomes was back to the sideline, the defense of the Chiefs strip-sacked Joe Flacco, scoring a touchdown in the process. At this point, the Chiefs felt confident in keeping their star quarterback out of the game no matter the injury’s severity.

Now, Mahomes is expected to miss up to a month with still no report of anything torn or broken. Matt Moore filled in for Mahomes during the game (throwing for 117 yards and a touchdown) and will likely be the Chief’s option moving forward for the remainder of the month and possibly up to the Chiefs’ Week 12 bye.

Betting Odds After The Mahomes Injury

With the injury, US sportsbooks have already seen major movement in their books. Listed as the second-favorite (+275) to win the Super Bowl just a few days ago, the Chiefs have fallen back to the fifth position. Now at +1200, the Chiefs sit behind the New England Patriots (+225) and three NFC teams in the New Orleans Saints (+600), Green Bay Packers (+1000), and San Francisco 49ers (+1000).

Getting out of the AFC looks to be an even bigger hurdle, as the Patriots (-115) are now the true favorite, with the Chiefs (+500) dropping from odds that nearly tied the Patriots earlier in the week.

Still, the Chiefs are projected to win their division, as the oddsmakers have no desire to remove them from the top spot. At -360, the Chiefs are well ahead of the Oakland Raiders (+500) and LA Chargers (+600).

The odds to win NFL MVP will not be reposted until after the Monday Night Football contest, but bettors can look to find odds for Mahomes to take a strong downward turn. Russell Wilson was labeled as the favorite (+150) earlier in the week, with Mahomes (+225) just behind.

With a near-month expected to be missed for Mahomes, it would surprise nobody to see players such as Christian McCaffrey or Deshaun Watson see their odds move ahead of Mahomes and closer to Wilson.

The status of the Chiefs’ season isn’t up in the air but this a definitely a roadblock many Kansas City fans were not expecting. However, with injuries come opportunity and those who still believe the Chiefs can get it done in January and February may not find better future odds on the Chiefs than right now.

Then again, if Matt Moore leads the team to a few losses in the near future, the current odds may be nothing compared to what they could potentially rise to. Gambling on the movement of future odds is always a struggle, but still, those with faith in the Chiefs have been blessed with a betting opportunity that could result in a sizeable payout.