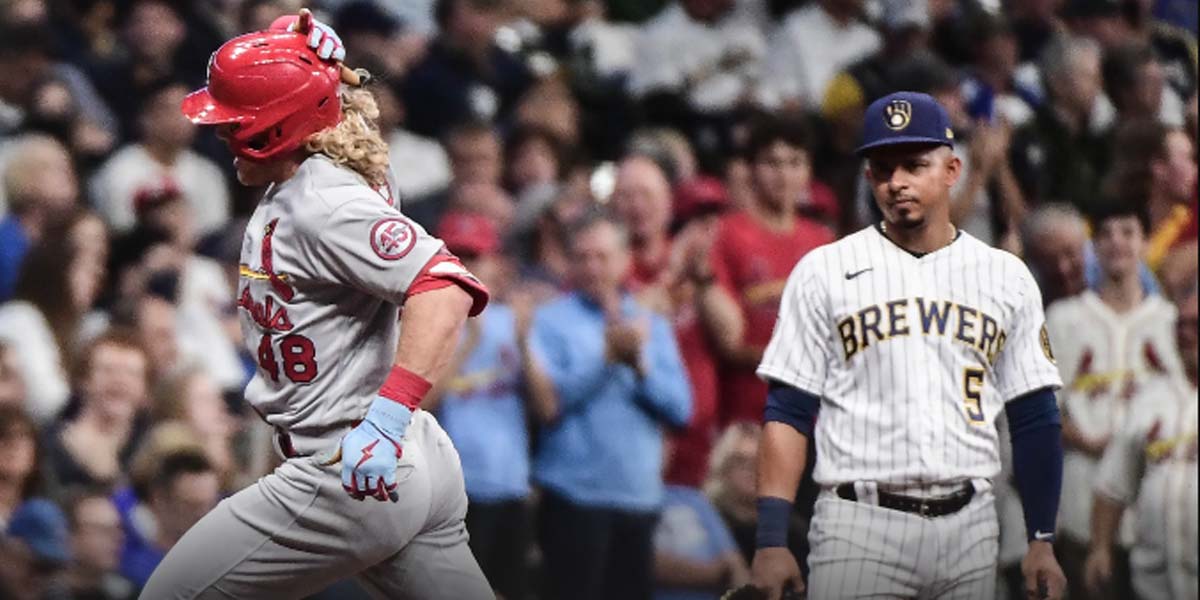 MILWAUKEE – Baseball season is officially in full swing, and bettors are being treated to a solid MLB betting slate Friday. One of the top matchups will feature the 4-3 Milwaukee Brewers hosting the 3-2 St. Louis Cardinals, with first pitch scheduled for 8:10 PM ET.

Cardinals Look To Tie Up Series

The Cardinals are looking to even up the series after dropping Thursday’s game 5-1.

St. Louis struggled to get much going offensively against Cy Young candidate Brandon Woodruff, who threw 5 innings and surrendered just 3 hits and 1 walk en route to his first win of the young season.

The Cardinals managed their sole run on an 8th inning solo shot off the bat of 9-hole hitter Tommy Edman, who enters Friday’s matchup hitting a red-hot .400 with a 1.337 OPS.

The Brewers did not need much offense production to hold off the Cardinals with Woodruff on the mound yesterday, but they got it anyway – as a team, Milwaukee posted 9 hits including 2 doubles, a triple, and a home run. However, the lineup struck out a concerning 11 times.

Peralta Vs. Mikolas – Who Has The Edge?

For Friday’s matchup, the Brewers will trot out 2021 All-Star Freddy Peralta while Miles Mikolas is expected to get the start for St. Louis.

While Peralta was nearly unhittable at times in 2021, his first start in 2022 was a bit rocky, surrendering 3 runs on 3 hits and 3 walks while striking out 6 in just 4 innings against the Cubs at Wrigley Field.

On the other side, Miles Mikolas similarly struggled against a relatively poor Pirates lineup in his first start, going just 3.2 innings while surrendering 2 runs on 6 hits and 2 walks, striking out just 1 batter.

While the low strikeout total is concerning, Mikolas was able to generate a solid 15 swinging strikes on 77 pitches; however, this was against the Pirates, so do not expect such a high swinging strike percentage from Mikolas in this one.

While Mikolas has shown the ability to be a very solid major league starter in the past (he led the NL in wins in 2018), Peralta currently belongs to a different class of starting pitchers. Online sportsbooks seem to agree, favoring the Brewers despite an inferior lineup.

Can The Brewers Cover The Runline?

Both starting pitchers failed to qualify for a win in their first starts: expect both managers to look to extend their pitchers a bit more their second time through the rotation.

If Peralta can go deep in this one, the -1.5 (+135) runline odds could be an incredibly valuable plus-money play

However, if the Cardinals can get to Peralta early, it may be an uphill battle for the Brewers to cover the runline.

The Cardinals certainly have the better lineup – anchored by offensive producers like Paul Goldschmidt, Tyler O’Neill, and Nolan Arenado, among others – but the Brewers have the clear pitching advantage in this one.

Another valuable line that could prove to be a great MLB betting play is the Brewers’ first five innings runline, currently set at -0.5 (-115). With Peralta on the mound, the Brewers have a very good chance of holding the lead heading into the sixth.

Another factor playing into the Brewers’ betting odds is Mikolas’ lack of strikeout ability – in his career, Mikolas averages just 6.6 K/9.

The Brewers’ lineup has not gotten hot yet, partially due to a high strikeout rate. Expect the Brewers to square the ball up against the right-handed Mikolas – who may not miss many bats – providing Peralta with plenty of run support in his search for his first win of 2022.

While the Cardinals certainly have a path to win the game outright, the Brewers should be able to cover the runline, as long as Peralta is effective.