NEW ORLEANS – This week’s edition of Monday Night Football betting brings fans an intriguing matchup to end Week 15 of the NFL season, as the Indianapolis Colts (6-7) travel south to take on the New Orleans Saints (10-3).

This is a must-win game for the Colts if they want to keep their slim playoff hopes alive. The Saints have already clinched the NFC South division for the third year in a row but are jockeying for home-field advantage with the No. 1 Seattle Seahawks and the No. 2 Green Bay Packers.

Playoff seeding won’t be the only significant aspect of this game because history could be made tonight as Saints quarterback Drew Brees is three touchdown passes away from passing hall-of-fame quarterback Peyton Manning for the most passing touchdowns in NFL History.

The Saints are nine-point favorites to beat the Colts in the Mercedes-Benz Superdome. Each team has a winning record ATS this season with the Colts earning a 6-5-2 record and the Saints coming in with an 8-5 record ATS. Taking a bet ATS is the best option in this game unless a bettor has faith in the Colts pulling off an upset.

New Orleans and Indianapolis have both been plagued by injuries to key players throughout the season.

The Colts (+360) have placed five wide receivers on the injured reserved this year and their top receiver T.Y. Hilton is a game-time decision tonight. He’s missed the last three games with a calf injury. Hilton’s status will be worth monitoring tonight because if he plays, the Colts passing attack instantly receives a major boost.

The Saints (-450) were without Drew Brees for five games earlier in the season and have not missed a beat since he has returned. However, the Saints did place two defensive linemen, on injured reserve this week in Marcus Davenport (foot) and Sheldon Rankins (ankle).

Both were productive members of the Saints front seven and the defense will have to step up – especially with the Colts sixth-ranked rushing attack led by running back Marlon Mack .

The total for this game is set at 47.5. Take the over, as the Brees-led Saints offense will have no problem putting points on the board. Also, any points scored by the Colts offense will be a bonus to making the over a winning bet.

Since becoming the head coach of the New Orleans Saints, Sean Payton has never shied away from putting his players in position to break records. A season ago, Brees became the NFL’s all-time leader in passing yards in a 43-19 rout of the Washington Redskins.

With that in mind expect a fired-up Saints team to come out on Monday Night Football with the intention to get Brees this record. Furthermore, Bovada and other online sportsbooks have odds on who will score the first touchdown in the game. 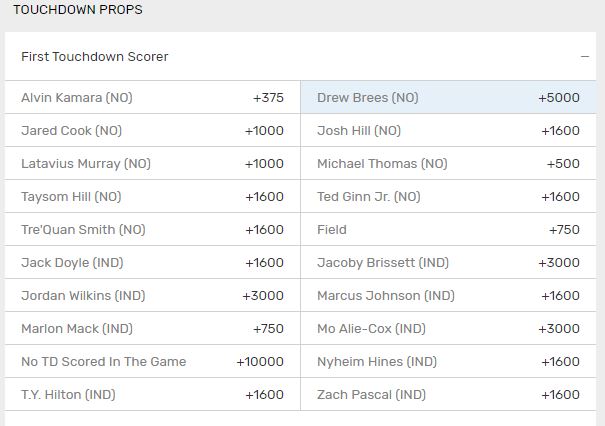 The sportsbook has Brees listed at +5000 odds to put the first points on the board tonight. While he is not a runner, these advantageous odds could provide a boost to parlay bets or provide fans with a winning bet tonight.

Brees won his first Super Bowl against the Colts franchise and now he will have the opportunity to make history at the expense of the franchise yet again.