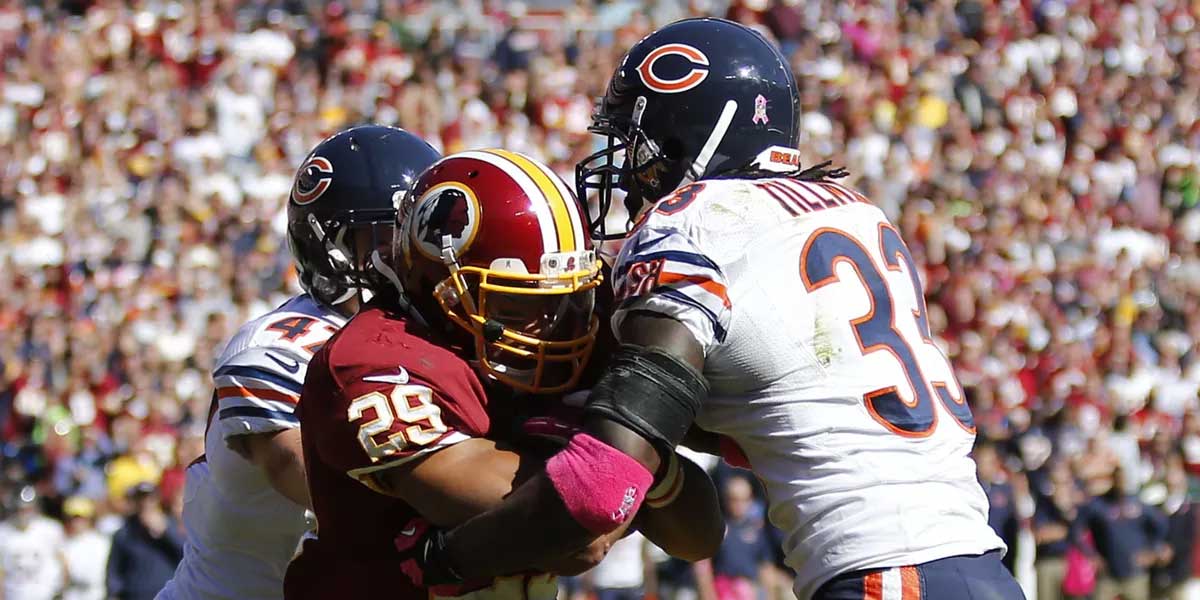 LANDOVER , Md. – This week’s edition of Monday Night Football presents us with the Chicago Bears (1-1) on the road traveling to FedEx Field to take on the Washington Redskins (0-2).

The Bears offense has struggled to start the season, as Chicago has only scored one touchdown through two games. This could be considered a must-win game for the Bears because the other three teams in the NFC North won on Sunday and a loss here would drop the Bears into last place in their division. The Redskins have been dealing with injuries to key players and haven’t been able to capture their first victory of the season.

The Chicago Bears are 5.5-point favorites on the road to beat the Redskins at US sports betting sites. The O/U total for this game is 41. Take the under here because it’s going to be tough for the Redskins to put points on the board against arguably the best defense in the league, and the total has gone under in seven of Chicago's last seven games.

If you’re going to bet on the Redskins (+210) SU here, keep in mind that they are 1-8 SU in their last nine games. Meanwhile, the Bears (-250) playing away from Soldier Field hasn’t stopped them from having success because Chicago is 5-1 SU in their last six games on the road.

The Chicago Bears defense has been keeping the team in games, giving up an average of 12 points per game. The offensive unit led by third-year quarterback Mitchell Tribusky has struggled immensely, only scoring 19 points through two games.

On the season, Tribusky has thrown for 348 yards, no touchdowns, and one interception not great numbers for a starting quarterback. If the Bears want to repeat as NFC North champions, they’re going to need the entire offense to play better.

Rookie running back David Montgomery has scored the only touchdown for the Bears this season and he should be very involved in this game; the Redskins have given up the third-most rushing yards in the NFL, allowing teams to run for an average of 168 rushing yards per game. The opportunity for a breakout game is here for Montgomery.

The Bears should be able to get their running game going in this matchup and shouldn’t have to rely on Tribusky’s arm too much. If the Bears offense can get some momentum early, this game could get out of hand quickly.

After this game, the Bears will take on their division rival Minnesota Vikings at home.

The Redskins have shown flashes of the type of team they can be and other times they’re just plain bad, making it easy to see why they haven’t won a game yet this season. Despite the plethora of injuries this season, the Redskins can still linger around in games and catch some teams off guard. Case Keenum has been surprisingly good under center for the Redskins throwing for 601 yards, five touchdowns, and no interceptions.

The Redskins are still without their starting running back Derrius Guice due to a torn meniscus. Veteran running backs Adrian Peterson and Chris Thompson have been splitting time in the backfield and will need to have big games to keep the Redskins competitive in this game. However, the Bears defense has only surrendered an average of 68.5 rushing yards per game, which will make it extremely tough for the Redskins running backs.

Rookie wide receiver Terry McLaurin has been one of the few bright spots for the Redskins this season, he has 10 receptions, 187 receiving yards, and two touchdowns he has been Keenum’s favorite target deep down the field and he should see plenty of targets again in this game.

Following this game, the Redskins will be on the road facing the New York Giants.

This game does have some interesting prop bets to consider. “Will a special teams or defensive touchdown be scored?” is a prop bet that could be worth the risk.

Last season, the Bears had the most takeaways in the NFL and most of those defensive starters have returned for the Bears. Although Washington has not committed a turnover all season, the Bears defense is talented enough to force the Redskins to turn the ball over for the first time this season. With “Yes” having +220 odds and “No ” listed at -280, the risk could be worth the reward as both offenses have struggled this season.

Another prop bet worth considering is on the total receptions by Terry McLaurin, which is listed at O/U 4.5. McLaurin is the only playmaker the Redskins have had this season and he has quickly become a favorite of quarterback Case Keenum. The Redskins should have to throw the ball often in this game as they’ll likely be playing from behind. McLaurin should comfortably catch over four passes in this game and he’s caught exactly five passes in each of his first two games. Take the Over for this one.

Kickoff for the Bears-Redskins matchup is scheduled for 8:15 p.m. EST. The game will be broadcasted by ESPN and can also be streamed live on WatchESPN or the ESPN app.