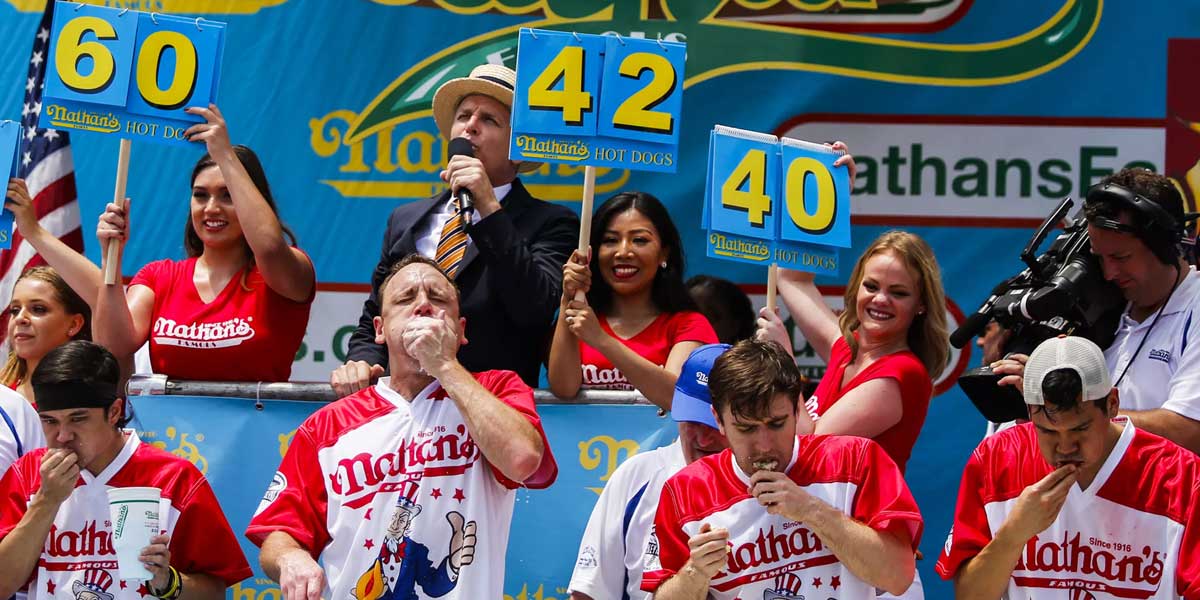 NEW YORK — With the annual Nathans Hot Dog Eating Competition set for later on this year on July 4, the betting odds have been released.

There are a few different props that people can bet on. Some of them could be sure things and others could come down to the last bite.

Both Joey Chestnut and Miki Sudo have headlined the event in recent years and are looking to defend their titles this year as well.

The odds for this year's hot dog eating contest has been revealed on online sportsbooks. There are a total of five different features that people are able to bet on. These are the different prop bets that you can put money on:

Will the Men's Contest Go to Overtime/Eat Off?

Joey Chestnut and Miki Sudo have been the most recognizable hot dog eaters in recent years. They both have the odds in their favor this year as they have dominated the contest together for the past four years.

Chestnut’s odds to win the Nathan’s Hot Dog Eating Contest are at -900 with the Over/Under for the winner being 71 ½ hot dogs eaten with -140 odds of going over. Chestnut has eaten 70 or more hotdogs for the past four competitions. In 2019 he finished the competition having eaten 71 hotdogs.

Sudo’s odds to win are at -550 with the women’s Over/Under for hot dogs eaten being set at 37 ½ with -140 odds to hit the Over as well. Sudo has pulled off the Over 3 times in the last six years. She came close in 2018 with 37 hot dogs eaten. The Over/Under bet will be a tough one when it comes down to it.

Joey Chestnut is one of the most impressive eaters’ that this contest has ever seen. He has won a total of 12 hot dog eating contests and currently holds the record of 74 eaten hot dogs that he set in 2018. Not to mention that he has broken his own record 5 times.

On the Women’s side, Miki Sudo has won a total of 6 straight hot dog eating contests with her personal best being 41. Before Sudo,  Sonya Thomas had won the contest 3 straight times and she holds the record with 45 eaten hotdogs amongst women.

Since the inaugural women’s contest began in 2011, only Thomas and Sudo have been victorious amongst the other female competitors.